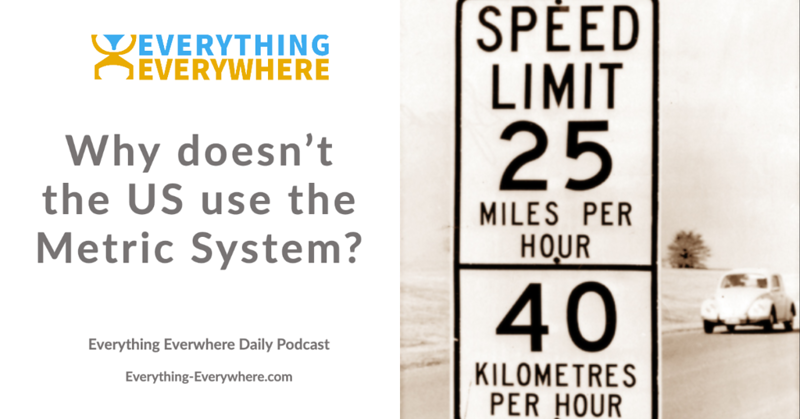 Of the 193 countries in the United Nations, exactly three haven’t adopted the widespread use of the metric system: Myanmar, Liberia, and the United States of America.

Of those three, the US is the country that really stands out. It has the biggest economy in the world, does an incredible amount of international trade, has immigrants from every country in the world, and is even the home to the United Nations.

If there was one country on paper that should be using the metric system, it is the United States.

Find out why Americans are still stuck using feet and inches on this episode of Everything Everywhere Daily.

The story of the United States and the metric system goes back to the beginning of the country.

Establishing a system of weights and measures is actually written into the US Constitution in Article 1 Section 8, Congress shall have power to “fix the Standard of Weights and Measures”.

The US constitution was written in 1788 and the measurement system we call the metric system was created right around the same time in France. The problem was, it wasn’t exactly at the same time, and when the US first started looking for a system, the meric system didn’t exist.

Establishing a system of measurement was actually one of the very first things the new United States government set about doing. It was in Washington’s very first State of the Union address, as well as his second and third.

The first Congress in 1789 created a committee to look into the matter, and in 1790 the committee, led by Secretary of State Thomas Jefferson, issued their report a “Plan for Establishing Uniformity in the Coinage, Weights, and Measures of the United States”.

There was an assumption among most early Americans that some sort of decimal system would be what the country would use. The United States had just agreed to a decimal currency a few years earlier in 1785, and decimalization was the modern thing to do.

The Jefferson plan put forward the first decimal system of measurement in world history. Jefferson’s system used traditional English measurement names like feet, ounce, and bushel. It also had values for each measurement which was close to the traditional unit.

If this system sounds sort of metric-y, you are right. Jefferson was a huge francophile and spent a lot of time if France talking over ideas with the French intelligentsia. It is not surprising that his system, save for the names of the units, was so similar to the French system.

It isn’t hard to think of some sort of alternate history where the American decimalized system of feet, ounces, and bushels got adopted by the British, spread throughout the empire and then the world, and today I’m sitting here doing a podcast about why the French don’t use the American decimal system of measurement.

But that didn’t happen.

Jefferson’s plan had bipartisan support from his allies like James Madison and James Monroe, as well as his political opponents like Alexander Hamilton and George Washington.

In 1791 the Senate created their own committee, and in 1792 they voted unanimously to support the Jefferson plan.

With the President, both houses of Congress, and most major figures in the government supporting the proposal, what happened?

Jefferson had been talking to people in France about developing standards for the new system which could be used globally.

This pendulum basis for length had an international agreement, but then the French Academy of Science decided to go their own way and picked 1/ten-millionth the distance from the pole to the equator through the Paris meridian as the basis for the meter.

This derailed the entire effort at trying to create an international system of measurement in the late 18th century. As Jefferson later wrote in his memoirs:  “The element of measure adopted by the National Assembly excludes, ipso facto, every nation on earth from a communion of measurement with them.”

This delayed the United States acting. In 1795 congress passed an act to adopt Jefferson’s plan and on the last day of the session, the Senate said they would take it up in the next session, but they never did.

Congress’s attention was taken up by the Northwest Indian War in what is today Ohio, the subsequent land rush and need for surveying, and nothing ever happened. In fact, it was from this need for surveying that the first-ever unit of measurement was passed by Congress: the Chain, which is 66 feet.

In 1821, Secretary of State John Qunicy Adams did a review of the current measurement systems used in the states and determined that the customary units current in place were sufficiently uniform and there was no need for change.

The French system of measurement, at this time, being the only real decimalized system of measurement since the American plan was never adopted, was gaining in popularity. A convention was convened in Paris and a treaty was signed among 12 countries call the Meter Treaty. This treaty established the unit of mass and length, and it also created the International Bureau of Weights and Measures which would be the governing body for this new system.

Guess who one of the original 12 signatories of the treaty was? You guessed it: The United States.

In fact, the United States remains a member of the International Committee for Weights and Measures to this day.

In fact, the American system of feet, pounds, and gallons is defined by the metric system. Whereas all the metric units have values based on some natural measurement (which is a great topic for another episode), all the Imperial units are defined in terms of their metric counterparts.

Moreover, most Americans are unaware that the metric system, due to our signing the Meter Treaty and a US law passed in 1866, is fully legal in the United States and can be used for any contractual and legal purposes.

In 1968, congress released a report titled “A Metric America: A Decision Whose Time Has Come”, and in 1975 congress passed the Metric Conversion Act which was “to coordinate and plan the increasing use of the metric system in the United States.”  The plan was to phase in the metric system over a 10 years period.

For those of us who remember the 1970s, we might recall some of the metric efforts which were in place at the time. On September 17, 1977, Carleton College and  St. Olaf College in Minnesota played the first and only metric American football game. The field was 100 meters by 50 meters, and they received special permission from the NCAA.

The problem was the conversion was entirely voluntary. If people didn’t need to change, there was no real incentive to do so. The expense of changing signs and measurements weren’t worth it for most businesses, so it just never happened.

The metric system in the US is like going to the gym. We all know we should do it, and eventually, we’ll get around to it, but we just never do.

It primarily has to do with costs and benefits. The United States is a big country and the world’s biggest economy. The current system works. Unlike smaller countries that might have a greater need to be in step with the rest of the world, the US can get away with having a different system.

The vast majority of things where people deal with measurements are not international. You go between towns, you fill up your car, you buy food. All of these do not require any sort of international agreement.

However, if we were to do a hard transition to metric, it would cost a lot of money. The majority of road signs would need to be replaced as would all the labels, packaging, all legal titles to land, and a host of other things we probably can’t even think of.

It is perhaps more helpful to think of going metric as being on a continuum rather than being binary.

Despite three three countries I listed in the introduction of this episode, the truth is there are a lot more countries that use non-metric units in daily life.

In Canada, most people would give their weight in pounds and their height in feet and inches, and floor space in apartments is given in square feet.

In the UK, roads are still measured in miles and weight is given in stone, and no one really knows what a stone is.

Gallons are still used in many Central American countries, but only for the sale of gasoline.

The United States is just on the other end of the spectrum. We do use metric for some things. You purchase soda by the liter and pharmaceuticals by the milligram. Pretty much all science in the US is now done in metric, so a future Mars Climate Orbiter, which crashed in 1998 because software programmed with non-metric units, probably will never happen again.

Pretty much every student in elementary school will be exposed to the metric system.  An estimated 30% of all products manufactured in the US are in metric, as are many products by American companies manufactured overseas.

However, things like distances between cities and the sale of gasoline don’t really matter for dealing with the rest of the world. Americans use metric for things we need to use metric, and we don’t for things we don’t.

There isn’t really a movement to adopt metric in the US. It hasn’t been a political issue in the US for over 40 years. There is currently no call for the adoption of metric anywhere on the political spectrum. There isn’t even a movement in any local communities to start moving local measurements to metric.

Absent some sort of sudden change in the political winds, the United States will probably remain a system which is mostly imperial units, but with a small growing number of things measured in metric.

And besides, if we were to quickly change from pounds to kilograms…..there would be mass confusion.