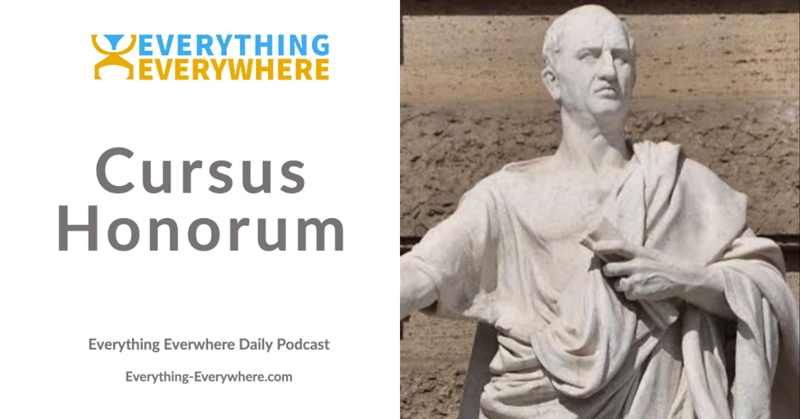 In the Roman Republic, men of senatorial rank could compete for political offices which were placed in a set order and had to be earned sequentially.

This hierarchy was known as the Cursus Honorum.

The Cursus Honorum was the basis of political and social life in ancient Rome, and the fortunes of entire families could rise and fall based on how high someone could climb.

Learn more about the Roman political ladder on this episode of Everything Everywhere Daily.

Roman social institutions were extremely complex. Many layers of social and religious traditions dictated how Roman society functioned. We don’t even know what all of them were, because so many of the texts from that period have been lost to use forever.

In the political realm, there were distinct offices where Romans could run for election, but they weren’t open to just anyone.  The Cursus Honorum, which translates to the course of honor, was the path on which aristocrats climbed the ladder of success in ancient Rome.

Each step on the Cursus Honorum was required before you could advance to the next step. Unlike the modern world, you couldn’t just jump to the top job without any prior experience. Also, each step in the ladder had an age requirement.  There were also some positions which were lateral moves, that were important roles, but it didn’t necessarily advance you or your family to the top jobs.

With that, let’s go through the list as it would have been during the Republican Period. Once the imperial period starts, most of the rules pretty much go out the window because the emperor could do whatever he wanted, but during the Republic, the rules were mostly held in place and taken seriously.

At the bottom of the Cursus Honorum is the position of Military Tribune. Before anyone could run for a political office, they had to spend 10 years serving in the military. If you came from a senatorial family, you would serve as a military tribune, which was like a junior officer today. Usually, your family would set you up with a general who was a member of your family or a friend of the family, and you would serve under him.

Military service and military accomplishments were perhaps the most important thing in Roman life. While not everyone specialized in military service, those who excelled and won major victories were held in the highest esteem.

Each legion would have six tribunes. Some tribunes were elected by the people, but others were appointed by consuls and by the generals themselves. There were different levels of tribunes that had different levels of responsibility in the legion. Because there were so many tribunes and so many legions, there were ample positions to go around and almost any young man from a noble family would be able to become a military tribune.

Once you’ve had some military experience under your belt, you could run for elected office. All of the elected positions which were on the Cursus Honorum had terms of one year, which extended from January 1 to December 31 of the year.

The first position was that of Quaestor. The quaestors were responsible for finances, accounting, and payments. The age requirement to become a quaestor was 30, or 28 for members of patrician families. Each consul, provincial governor, and head of a legion was assigned a quaestor to handle finances..

The number of quaestors changed over time. There were originally 4 at the start of the republic, but that number later grew to 10, and in the late republic there were 20, and finally under Julius Caesar, the number increased to 40.

Becoming a quaestor also guaranteed you a seat in the Senate.

Think of a quaestor as being an elected bureaucrat. They handled much of the day to day work which went on in the government which had to be done.

The second rung on the Cursus Honorum was the position of Aedile.

To become an aedile, you first had to have served as a Quaestor and must have reached the age of 36.

Aediles were responsible for public buildings, hosting public games and festivities, ensuring supplies of food and water, and keeping order. The number of positions was significantly limited compared to the number quaestors and tribunes.

There were two plebeian aediles selected each year, these were from the common people, and two curule aediles, selected from the upper class.

This was an extremely important position. Hosting games and festivals was a great way to get your name known by the populace. Being an Aedile was often very expensive because the aediles were expected to spend their own money to host many of the events.

The position of Aediles was not a mandatory stop on the Cursus Honorum. You could bypass it and be elected to the next level without it, but it would be much easier to get elected if the public knew your name because it was associated with games thrown by you, and from the general good governance of the city.

The closest modern analogy I can think of is that the Aediles were like the mayors of the city of Rome. They were responsible for the day to day functioning of the city.

The next rung was the position of Praetor. To become a Praetor you must have served as a quaestor and be 39 years of age.

Praetors mostly served as judges. They would preside over trials and look over the justice system.

There were different Praetor positions, the two most important of which were the Praetor Peregrinus, who oversaw cases involving foreigners, and the Praetor Urbanus. The Praetor Urbanus basically served as the Supreme Court for Rome in that they could overturn lower court decisions, and they could adjudicate trials for high ranking Roman officials.

There were two really great perks to the job of Praetor. First, Praetors were assigned six lictors. Lictors were bodyguards who escorted the Praetor wherever they went in Rome. Each of the lictors carried with them a fasces, which was a collection of bound sticks with an axe head, which is a symbol of power.  The word fasces is where the word facist is derived. Also, next time you watch the State of the Union Address, you will notice two fasces on on the columns behind the speaker’s podium.

The second perk of the job was getting imperium. Imperium was a wide ranging executive authority which could only be checked by people above you on the Cursus Honorum, or by your equals at your level. Most importantly, if you had imperium, you were held immune from prosecution for the entire time you had imperium. Imperium was the root of the word for emperor and empire.

After serving a year, Praetors would be assigned a position as Propraetor, which would usually mean commanding an army or a provincial governor. Propraetors also held imperium.

The next, and highest rank on the Cursus Honorum was that of Consul. To be a consul you had to have served as a Praetor and must be 42 years of age.

There were two Consuls selected every year, and the two men were equal with each other, and each could veto the other’s actions.

Being a Consul was a really big deal. It would bring honor to your family for generations, and being from a consular family would bring considerable status.

Like Praetors, Consuls also had imperium, but they were awarded 12 lictors instead of just 6.

Someone who was elected to each position on the Cursus Honorum at the minimum age was said to have been elected “in his year”, and it was considered a great accomplishment.

If you were elected to Consul without having had a family member previously elected, you were considered a “new man” or “novus homo”.

Marcus Tullius Cicero was famous for having been elected in his year, and having been a novus homo.

Roman years were referred to by the Consuls elected for that year. For example, the year 63 BC was known as the year of Cicero and Hybrida, as they were the two consults for that year.

Even though the Consulship was the highest position on the Cursus Honorum, it wasn’t the last position.

After their term, Consuls were given positions as Proconsuls which also gave them imperium. Proconsuls were usually assigned as generals or as governors of provinces.

It was here that all the time and money spent climbing the Cursus Honorum really paid off. As a provincial governor, you pretty much had unlimited power to do what you want because you were far away from Rome and the final authority. Most Proconsuls used it as an opportunity to make money via taxes, bribes, and corruption.

It was possible to run for Consul again 10 years after you served.

The final step on the Cursus Honorum was the rank of Censor. The Censor didn’t hold much power, but the power they did have couldn’t be vetoed by someone else other than another Censor. They were responsible for taking a census, determining voter roles, and the membership list of the senate.

This is where the word “census” comes from.

They were also given charge for enforcing public morality in Rome, which is where we get the modern words “censor” and “censorship”.

Censors didn’t have imperium or lictors, but the position was considered a great honor.

There are three other really important positions which could be addressed, even though they were not technically on the Cursus Honorum.

The position was so important that some patricians renounced their patrician status just so they could run. Most notably Tiberius Graccus did this in 133 BC to try and push through his land reforms.

Tribune of the Plebes were also considered sacrosanct, meaning they couldn’t be touched and anyone who did could be banished or killed.

The second position which is not technically part of the Cursus Honorum, but in theory the highest position possible in the Republic, was that of dictator.

Dictators were appointed only in times of emergency by the Senate. They were given 24 lictors and the term of office was only six months. There was no one else who served alongside a dictator, nor could their decisions be vetoed by the Tribune of the Plebes. A dictator had absolute military and civil authority for the duration of their time in office.

The final position was that of Pontifex Maximus. The Pontifex Maximus was the supreme priest in the Roman religion and was an elected position. Unlike every other position I just listed, the term of office was for life.

You might also note that Pontifex Maximus sounds very familiar. That is because the same term is still used today as the Latin title for the Pope.