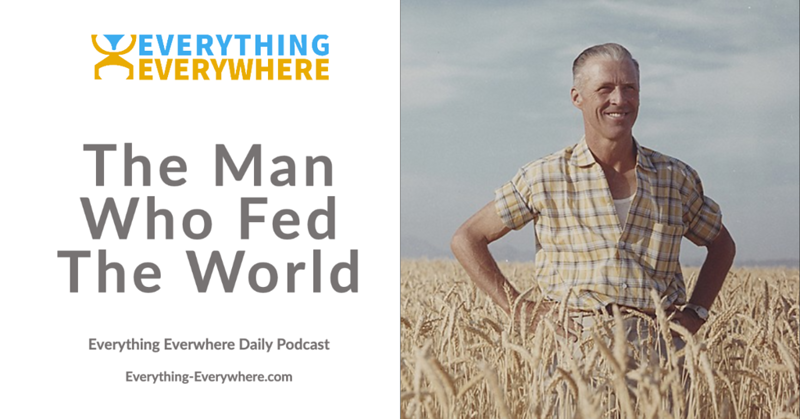 Which person can be credited with having saved the most human lives in history? There might not be a direct answer to that question, but one person whose name always comes up is that of Normal Borlaug.

Borlaug has been called “Humanity’s Forgotten Benefactor” and was the winner of the Nobel Peace Prize. His efforts have been attributed to having saved the lives of over a billion people.

Yet, few people know who he is.

Learn the inspiring story of the man who saved the world on this Episode of Everything Everywhere Daily.

Audible is offering a free month of their service and two free audiobooks. If you are interested in today’s subject, which touches on human demographics, I’d recommend the book The Human Tide: How Population Shaped the Modern World by Paul Morland.

It covers how humanity got to where it is today, how it affects the modern world, and where human population will go in the future.

You can get your free audiobook by signing up for a free trial at audibletrial.com/EverythingEverywhere or click on the link in the show notes.

Norman Borlaug was born outside Cresco, Iowa in 1914 on his grandparent’s farm. Even though his life would eventually take him off of the farm, his thoughts always remained with farming and raising crops.

He was a good but not great student. His decision to get a college degree  in the 1930s in the middle of the Great Depression was a huge decision for an Iowa farm boy. He failed the entrance exam to the University of Minnesota and entered the school’s general college where he was able to then transfer after a semester.

He initially intended to pursue a career in forestry, but his life was changed when he attended a lecture by Elvin Stakman of the University of Minnesota’s plant pathology department, on wheat rust. Rust was a fungus that grew on wheat and other cereal crops and could destroy entire harvests. Stakman had success in breeding wheat crops that were resistant to rust.

When Borlaug’s plans to join the forest service were quashed due to budget cuts, he asked Stakman if he should focus on forest pathology instead. Stakman advised him to focus on plant pathology, which was his field of interest, and he re-inrolled in Stakman’s plant pathology program.

During his time at the University of Minnesota, he was also an accomplished athlete, having made the semi-finals of the Big Ten Wrestling tournament.

One of the things which struck Borlaug in the 1930s as  an agricultural scientist was the Dust Bowl. While many people thought that increased agricultural mechanization was the problem, Borlaug realized that areas that practiced high-yield farming had little to no problems. Borlaug wanted to spread the gospel of high-yield farming to other countries where dust bowl conditions happened all the time.

After having been turned down to serve in WWII because his job had been considered essential, after the war, he turned his attention back to agriculture.

In 1944 he took the job of director of a program in Mexico City which was run by the Rockafeller Foundation. The goal of the program was initially to transmit modern farming techniques to Mexican farmers. Borlaug, however, soon took the program beyond that and began developing new strains of crops to improve yields and conditions under which they could grow.

One of his biggest accomplishments was that of improved dwarf wheat. Many people think that long luscious stalk of wheat is what you want. This isn’t necessarily true. The longer the stalks, the more energy the plant puts into stalk creation, which is inedible. You want more energy put into the grains which is what people eat. Also, taller stalks will end to droop and fall over past a certain height, which makes them hard to harvest.

This Semi-dwarf wheat which was developed in the 1940s through the 1960s in Mexico is now 99% of the wheat grown in the world today. This wheat is more resistant to rust, easier to harvest, and more receptive to fertilization. It also grows quicker, allowing for more crops, with varietals for sunlight and precipitation conditions for different regions.

Through the work of Normal Borlaug, Mexico had become self-sufficient in wheat production by 1956 and became a net exporter.

By the early 1960s, India and Pakistan were facing severe food shortages and famine.

Borlaug proposed that strains of his dwarf wheat could solve the problem by dramatically increasing wheat production.

Many people criticized the idea because wheat was never a staple crop in South Asia. They said that people would prefer to eat native crops like rice, lentels, and cassava. Borlaug actually agreed with them but noted that high yield varietals of those crops hadn’t been developed yet, so wheat was the best short term option for food production.

In 1965 as famine was reaching new heights, the governments in India and Pakistan were willing to try anything, so they allowed the importation of dwarf wheat seeds.

Borlaug personally led a convoy of 35 trucks filled with seeds through Mexico and to the Port of Los Angeles, where they were loaded on cargo ships for India and Pakistan.

Unfortunately, another war between the two countries erupted as soon as the ship left port.

Despite difficulties with the war and adapting to local conditions, the results were immediate and dramatic. There was a 70% increase in wheat production in the first year alone.

For his efforts in helping to waylay famine in South Asia, Norman Borlaug was awarded the 1970 Nobel Prize for Peace.

In 1984 at the age of 71, he began working with former President Jimmy Carter and Japanese philanthropist Ryoichi Sasakawa to bring high yield agriculture techniques to Africa. His techniques have seen yields triple in many African countries across many crops including rice, corn, and wheat

In 1987 he helped establish the World Food Prize which recognized “the achievements of individuals who have advanced human development by improving the quality, quantity, or availability of food in the world”.

Estimates of the impact of his efforts have placed the number of lives he saved at over 1 billion people and the land which didn’t have to be converted from wildlife to agriculture at 1.2 billion hectares.

Norman Borlaug passed away in 2009 at the age of 95, having saved the lives of more people than anyone in human history.