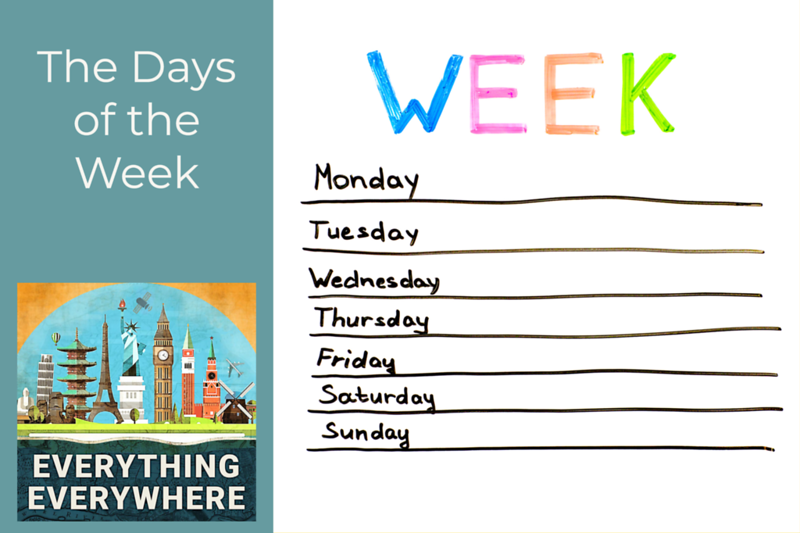 Most of our major divisions of time are based on some sort of natural event.

A year is one orbit of the Earth around the sun.

A month is one orbit of the Moon around the Earth.

A day is one rotation of the Earth about its axis.

However, one of the most commonly used units of time has no natural analog whatsoever.

Learn more about why there are seven days in a week and where the names for the day of the week come from on this episode of Everything Everywhere Daily.

I’ve done many episodes on how our calendar came to be.

I’ve talked about how the Gregorian Calendar fixed the Julian Calendar. I’ve done episodes on why January 1st is the beginning of the year. I’ve talked about the Roman origin of our months come from, and I also got into way too much detail talking about why we started numbering years as we do.

So, I have kind of a thing about time and calendars.

Nonetheless, despite all the episodes I’ve done on this subject, there is one I haven’t touched yet: the week.

A week has seven days, yet there is nothing in nature that is on a seven-day cycle. Unlike years, months, and days, a week is an entirely arbitrary unit of time.

So, why are there seven days in a week and not five or nine or something else?

I should note that there were other ancient civilizations that did have a different number of days in their week. The Egyptians had a 10-day week.

One of the problems with making a calendar is that none of the natural units of time are multiples of each other. No matter what you try to do, there will be a fractional number of days in a month or a year.

The average length of a lunar month, the time it takes for one full cycle of the phases of the moon, is approximately 29.5 days, which can vary by as much as four hours throughout the year.

A week is just a way to find a middle ground between a day and a much longer month.

The Egyptian idea of a 10-day week fits nicely into a period of almost 30 days.  Three Egyptian weeks would make up a month.

But you could also divide that into five or six-day weeks as well.

Seven divides evenly into 28, which is also close to 29.5 but isn’t accurate as ten, six, or five.

The people who gave us the seven-day week were the Babylonians.

The Babylonians associated the number seven with the seven planets. As I’ve mentioned before, the ancient definition of a planet was anything that moved in the sky, so the seven planets would have been the Sun, the Moon, Mercury, Venus, Mars, Jupiter, and Saturn.

The Babylonians associated each day of their seven-day week with one of the planets. This was developed almost 4,000 years ago.

The Babylonians also had the equivalent of a leap day every month to make the weeks line up with the moon.

So why did the Babylonian seven-day week win out over the ten or eighth-day week?

To the East, the Persians adopted the Babylonian tradition of using a seven-day week.

To the west, the Jews in the Kingdom of Judea used a seven-day week to celebrate their sabbath. The book of Genesis also had God creating the world in seven days, which was the basis for the week.

The Jewish Babylonian captivity cemented the seven-day week for Jews for everything, not just religious calendars.

To the west again, the Greeks adopted the seven-day week sometime around the year 400 BC.

When Alexander the Great conquered his way across Asia, he brought the seven-day week with him and introduced it to India.

The Romans used the seven-day week alongside their eight-day week, but eventually, the seven-day week was made official by Emperor Constantine in 321. He did this because it was already in widespread use and conformed to the Christian calendar, which adopted Sunday as their holy day.

For good measure, Constantine made Sunday a holiday for everyone, pagans included, who just called it the Sun’s Day. The early Christians called it Lord’s Day.

The Islamic Calendar also has a seven-day week that is based on the story of creation. The major difference between that and the account in Genesis is that God started creation on Saturday and ended by creating humans just before the evening on Friday.

The association of the days of the week with the ancient planets is one that has reamined since the Babylonians.

The order of the days named after planets was: Sun, Moon, Mars, Mercury, Jupiter, Venus, and Saturn. This particular ordering was a Greek and Roman tradition which is what was handed down to us today.

In many Romance languages, the days of the week correspond much closer to the planets’ names than in English or Germanic languages.

For example, Monday in Spanish in lunes and in French, it is lundi, which comes from Luna, the Latin word for moon.

Tuesday is martes in Spanish and mardi in French, which comes from Mars.

Wednesday is miércoles in Spanish and mercredi in French, which comes from Mercury.

Thursday is jueves in Spanish, spelled with a “j,” and jeudi in French, both named after Jove, another name for Jupiter.

Friday is viernes in Spanish and vendredi in French, which comes from Venus.

Saturday is sábado in Spanish and samedi in French, which comes from Saturn.

The only odd one is Sunday which is domingo in Spanish and dimanche in French. Both of those words come from the Latin word for “the Lord’s Day”, domin?cus.

So, the Romance languages stuck to the original Latin meanings pretty well.

For English and Germanic languages, words for the days of the week don’t seem to have much to do with the planets.

This has to do with the roots of English coming from the Saxons who invaded England and brought their language with them. Even though about half of the vocabulary in English has Latin roots, the days of the week are not among them.

Sunday and Monday are pretty obvious. They are named after the Sun and the Moon.

In Old English, they were called Sunnandæg and M?nandæg, or Sun day and Moon day.

The other day which does reference a planet is Saturday, which in Old English was Sæternesdæg, or Saturn’s day.

The other four days don’t have any planetary reference at all. Why is that?

In the Roman world, the planets were named after Roman gods, so every planet’s name is also the name of a god.

The ancient Germans swapped out the names of Roman gods for equivalent Norse gods.

Mars was the Roman god of war. The Norse god of combat was Tyr, which was also known as Tiw, t-i-w. So Mars day became known as Tiwesdæg in Old English.

Mercury was swapped out for Odin. Odin was considered the equivalent to Mercury, not because Odin was a messenger, but because Odin also had the role of escorting souls to the afterlife.

The day of Mercury became the day of Odin, which in Old English was pronounced “woden.” Hence, the day of the week was known as “W?dnesdæg” or Woden’s Day.

Jupiter or Jove was exchanged for Thor. Jupiter was the god of thunder and lighting, as was Thor. In Old English, it was pronounced Þunresdæg, which then morphed into Thursday.

For Friday, Venus was replaced with Frigg or Frigge, the wife of Odin.  This replacement was simply because Frigg was one of the most significant goddesses in the Norse pantheon. In Old English, it was Fr?gedæg, which became Friday.

So, to summarize the origin of the day of the week in English: Sun, moon, Tyr, Odin, Thor, Frigge, Saturn.

At this point, I haven’t mentioned one of the important parts of any week that you probably consider all the time: the workweek and the weekend.

The concept of a weekend and a workweek is a rather modern invention.

It didn’t really take hold until the early 20th century. In Jewish and Christian traditions, there had always been one day of the week dedicated to rest. Saturday for Jews and Sunday for Christians.

However, the idea of taking both days together as time off from work is only a little over 100 years old.

Every country on Earth has at least one day off every week, with most countries having two days off. The days which are taken off will differ in different countries.

In many Muslim countries, Friday is part of the weekend or is the only day off. Fridays, in Arabic, are known as al-jumu’ah, which means the Day of Congregation. It is religious, but it is not the equivalent of the Christian or Jewish sabbath as it is not considered a day of rest.

While Muslims are required to pray every day, Fridays are the day men are encouraged to gather together at a mosque.

Saturday and Sunday are the most popular days off all over the world.

Much of the Islamic world and Israel takes off Friday and Saturday. However, some Muslim countries like Morocco, Malaysia, and Indonesia have a Saturday-Sunday weekend, with an extended midday break on Friday to attend mosque.

The nation of Brunei, as well as some provinces of Indonesia and Malaysia, has off on Friday and Sunday.

With there not being any universal days for a workweek or a weekend, there is also disagreement as to what is the first day of the week.

The concept of a week is a handy thing, but it is oddly lacking in international standards. So long as everyone is on the same page in terms of days, months, and years, what week something is doesn’t really matter that much.

So if you look at our calendar, we have a very odd system.

Our numbering system for years is Christian, the names of the months are Roman, the days of the week are Norse, and the entire seven-day week system is Babylonian.  The division of a day into 24 hours comes from Ancient Egypt, and the division of hours into 60 minutes and minutes into 60 seconds was developed by Islamic scholars who were using a base-60 numbering system developed by ancient Sumerians.

It is a system absolutely no one would have designed from scratch, yet it somehow works quite well.