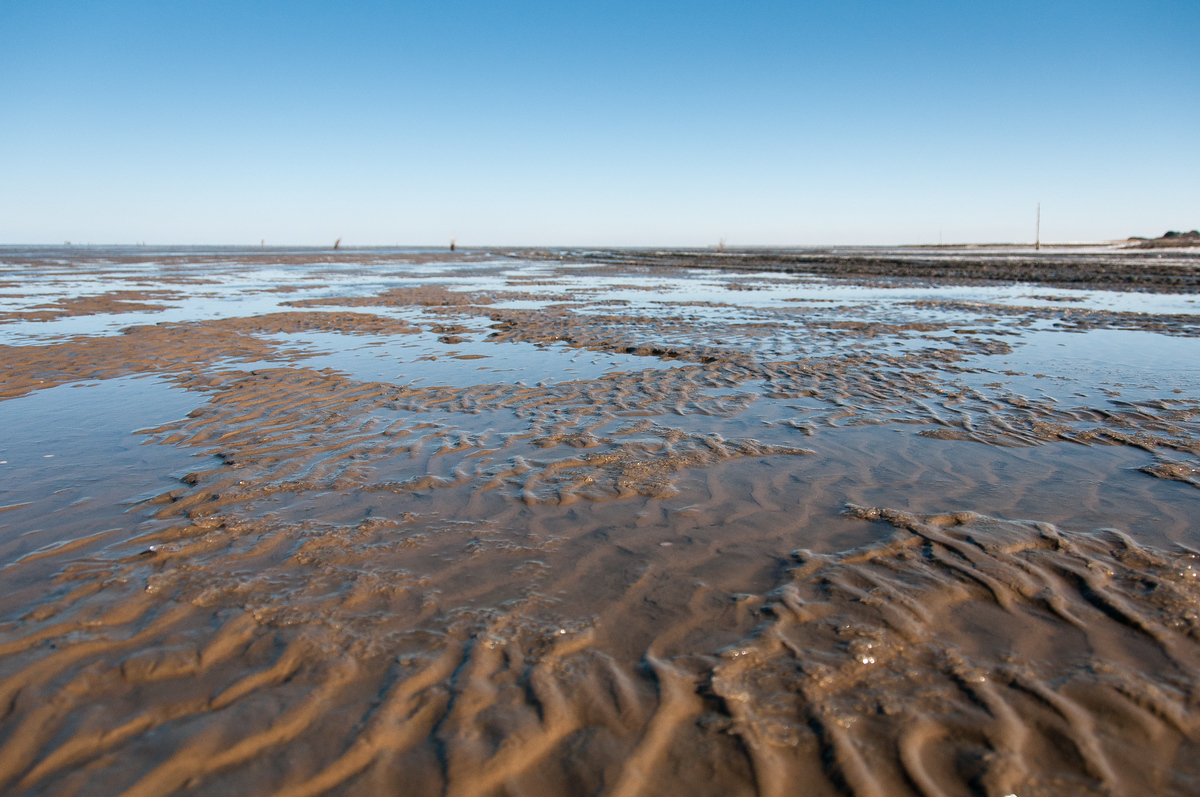 From the World Heritage inscription for The Wadden Sea:

The Wadden Sea comprises the Dutch Wadden Sea Conservation Area and the German Wadden Sea National Parks of Lower Saxony and Schleswig-Holstein. It is a large temperate, relatively flat coastal wetland environment, formed by the intricate interactions between physical and biological factors that have given rise to a multitude of transitional habitats with tidal channels, sandy shoals, sea-grass meadows, mussel beds, sandbars, mudflats, salt marshes, estuaries, beaches, and dunes. The inscribed site represents over 66% of the whole Wadden Sea and is home to numerous plant and animal species, including marine mammals such as the harbor seal, grey seal, and harbor porpoise. It is also a breeding and wintering area for up to 12 millions birds per annum and it supports more than 10 percent of 29 species. The site is one of the last remaining natural, large-scale, intertidal ecosystems where natural processes continue to function largely undisturbed.

The Wadden Sea was made a World Heritage Site just weeks before I arrived in the Netherlands. As I stood on the shore of the sea I was trying desperately to find something I could take a photo of that was a good representation of the sea. At low tide, there are a series of islands where birds land. I was there at high tide however so it was just a bunch of water, which left me nothing. Moreover, it was an overcast day which made little contrast with the sky and water. The is probably the worst photo I have ever published as my Daily Photo, but in the interest of completeness I offer it up as the best thing I could come up with at the shore of the Wadden Sea.

I revisited the Wadden Sea in 2013 while touring Germany and had a much better experience than what I had in the Netherlands. I visited the Hamburg Wadden Sea National Park near the town of Bremerhaven.

The key to any Wadden Sea visit is to time it so that you are there during low tide. During low tide, you can walk out a considerable distance and in some places actually walk to nearby islands. In Bremerhaven, they even had towers you could climb in the event that you get stuck out in the flats during low tide.

Since my first visit in 2009, both the German and Dutch governments have improved access and interpretative programs for the Wadden Sea. Rather than just visiting a random spot on the coast, visit a park facility in either country to get a better understanding of the sea and the creatures which live there.

The Wadden Sea is one of the multi-national UNESCO World Heritage Sites. It was initially inscribed into the list in 2009 but expansions were added to the protected property in 2014. The property is attributed to three countries namely the Netherlands, Germany, and Denmark.

The Wadden Sea is an intertidal zone that lies in between the coast of Europe’s northwest continental region and the Frisian Islands. This results in the formation of shallow water consisting of wetlands and tidal flats. This site is known for its biological diversity. It is also the largest of its kind in the world. Scientists believed that this unique system of temperate and flat coastal wetland environment is a result of both biological and physical factors. There are numerous species of plants and animals that thrive in the area.

Landscape in the Wadden Sea

The term Wadden Sea was derived from a Dutch word ‘wad’ that literally translates to ‘mud flat’. This name was derived from the extensive tidal mud flats and the tidal trenches that dominate this landscape of the region. Meanwhile, the island is continually contested by the sea and land. Because of these unique physical and biological features, it has resulted in one of the most unique natural landscapes in the world. But this formation dates back to several centuries ago, even as far back as the 10th century. The storm tides carried away peat land into the coastal dunes. The present island that make up the Wadden Sea is remnant of these coastal dunes.

Hence, you will find that the landscape is dominated by sandy beaches and a low, tidal coast. The waves continue to impact this landscape as it carries sediments into the island.

The rich diversity of flora and fauna species found in the Wadden Sea is one of its most compelling characteristics. It is a popular migration stopover and wintering site for many species of birds such as waders (or shorebirds), geese and ducks. Meanwhile, it serves as a permanent habitat for terns and gulls. Sadly, the current level of biodiversity found within the region is only fraction of what it originally was until human exploitation took over on the site. But for those who like to spot these species of birds and animals, some of the extinct ones still find a habitat in the Wadden Sea.

In addition to the birds, other fauna species found in the Wadden Sea include large fish species. Atlantic salmon, rays, sturgeons, and brown trout are just a few of those that are found here. Meanwhile, there were oyster beds found within the property before but most of them had disappeared, if not completely. About half of the original size of the Wadden Sea had been diminished and this also resulted in a reduction of river flow from the Rhine. This resulted in about 90% of the species of fish and other animals that inhabit the area to be at risk. Other fauna species that consider this property an important habitat include grey and harbor seals.

Aside from the exploitation of humans, the presence of invasive species (such as alga and other similar organisms) also poses a threat to the other species that inhabit the region. Hence, all three countries to which this UNESCO site is attributed to making a joined effort to aid in its conservation. The government of Germany, The Netherlands and Denmark work closely together to protect the Wadden Sea. Their cooperation extends to research, monitoring, and management of the site. Aside from being a world heritage site, UNESCO has also named it a biosphere reserve.

4 thoughts on “The Wadden Sea”