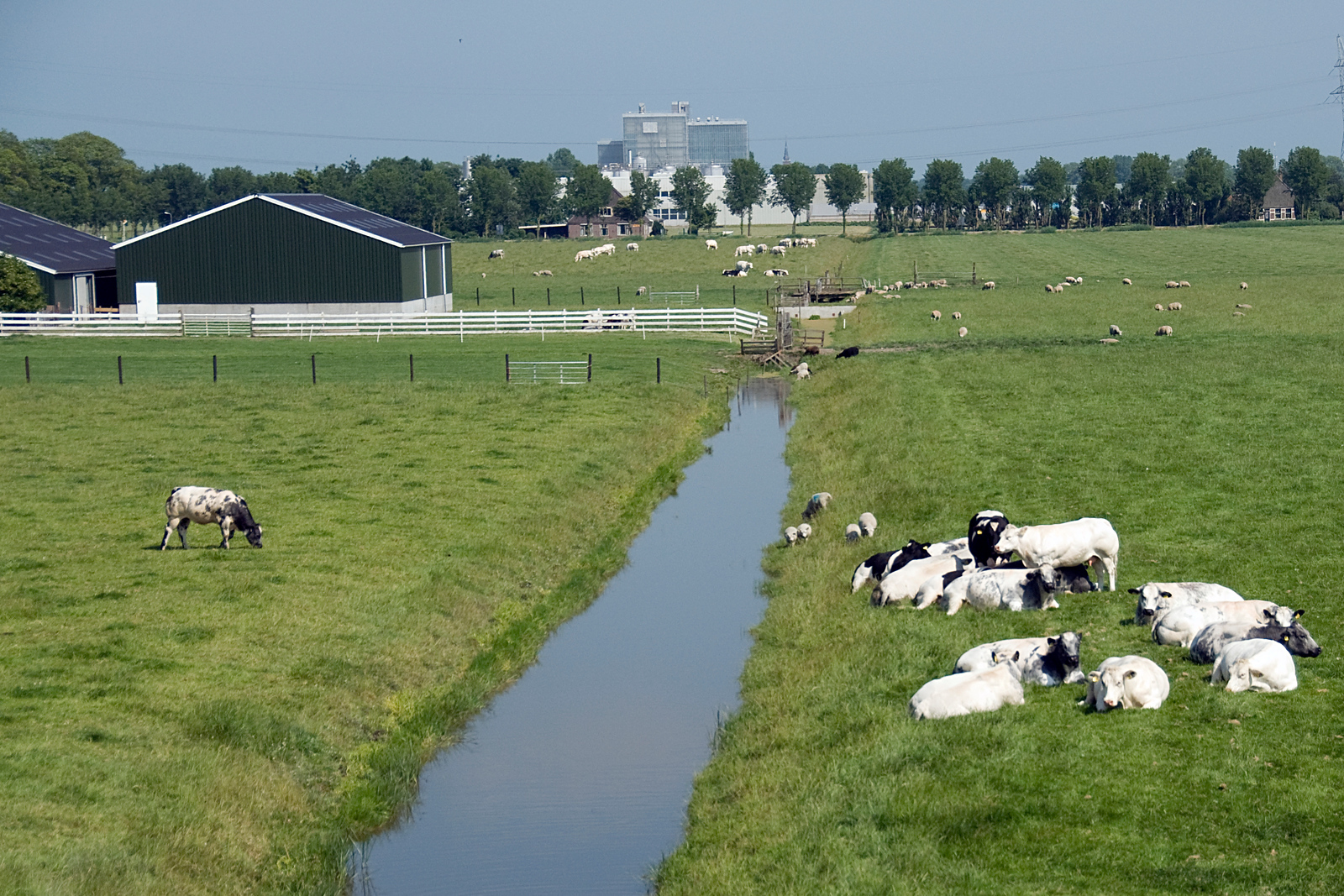 From the World Heritage inscription for the Beemster Polder:

The Beemster Polder is a cultural landscape located north of Amsterdam, dating from the early 17th century, and an exceptional example of reclaimed land in the Netherlands. It was created by the draining of Lake Beemster in 1612, in order to develop new agricultural land and space for country residences and to combat flooding in this low-lying region. It also provided a means for capital investment in land. Other earlier land reclamation had taken place, but technical improvements in windmill technology permitted more ambitious undertakings. The Beemster Polder was the first large project covering an area of 7,208 hectares. Today it is a well-ordered agricultural landscape of fields, roads, canals, dikes and settlements.

The polder was laid out in a rational geometric pattern, developed in accordance with the principles of classical and Renaissance planning. This mathematical land division was based on a system of squares forming a rectangle with the ideal dimensional ratio of 2:3. A series of oblong lots, measuring 180 meters by 900 meters, form the basic dimensions of the allotments. Five of these lots make up a unit, a module of 900 meters by 900 meters, and four units create a larger square. The pattern of roads and watercourses runs north to south and east to west, with buildings along the roads. The short sides of the lots are connected by drainage canals and access roads. The polder itself followed the outline of the lake, and the direction of the squares corresponds as much as possible with the former shoreline, so as to avoid creating unusable lots.

Besides the grid pattern of roads, watercourses, and plots of land, the polder is made up of a ring dike, a ring canal (the Beemsterringvaart), and relatively high roads with avenues of trees. Several villages were planned for the polder and today these are Middenbeemster, Noordbeemster, Westbeemster, and Zuidoostbeemster. Protected monuments include religious, residential and farm buildings from the 17th to 19th centuries, industrial buildings (a mill, a smithy, water authority buildings and bridges) as well as the five forts constructed between 1880 and 1920, which formed part of the Defence Line of Amsterdam (also a World Heritage property).

Visit the Beemster Polder was like visiting Wisconsin….except flatter. The area is mostly dairy farms and it is typical of the polders (reclaimed land) which makes up much of the Netherlands. It totally explains Wisconsin is a dairy state.

Beemster Polder is a UNESCO World Heritage Site in the Netherlands that was inscribed in 1999. The site is considered culturally important because it reflects the life-long struggle that the Netherlands have had to face throughout its history. One-third of the country is below sea level; this means that many regions in the country have to deal with flooding or has to find ways to control the spread of water in some way.

Beemster Polder is one example of this struggle. This region was nothing but a huge lake or body of water. But now, this area once filled with water is now a fine and green farmland. Beemster Polder is also a good example of how the Dutch citizens and government turn the reclaimed land into good use. There were a number of experiments innovated during the 16th century to reclaim large expanses of water to form a large piece of land. The poldering project required a combination of architectonic and technological development.

Beemster Polder’s history started in the early 17th century. As mentioned above, it is the best example of how a reclaimed land in the Netherlands was utilized and flourished. The entire site is made with a well-organized landscape layout consisting of fields, canals, roads, settlements, and dikes. This layout used in the municipality was based on Renaissance and classical planning principles. This planning method was advanced for its time, which makes it even more impressive.

This planning pattern involved breaking down farmlands from plots to subplots. All of the roads also follow a basic grid pattern. Meanwhile, the canals follow a similar path as the roads in order to provide easy access.

There are 15 windmill networks in Beemster Polder. These windmills are used to harness the power from the wind to operate waterwheels that pump out excess water from the lake into the canal before it is drained. The use of these windmills started in the 15th century on smaller lakes. By the 17th century, this was when larger windmill networks were developed to provide a more effective drainage system.

The center of Beemster Polder is located at the town of Middenbeemster. The best way to get here is to drive your own car. If you are traveling from Amsterdam, you can take the train. The total travel time is one and a half hour. Once you get off the train, you must take a bus to Beemster Polder. It takes about 20 minutes to reach the municipality of Beemster.