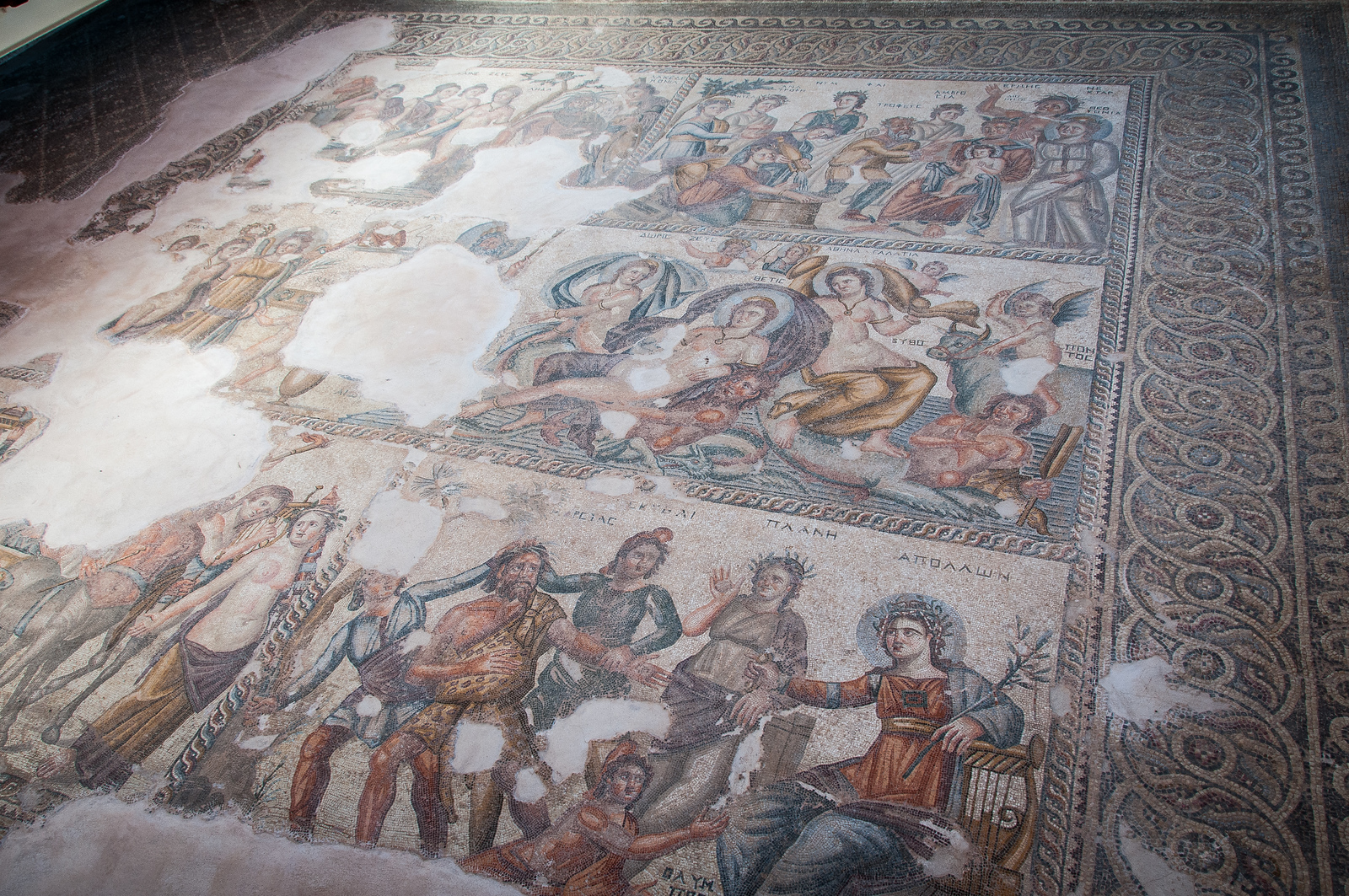 Because of their great antiquity, and because they are closely and directly related to the cult and legend of Aphrodite (Venus), who became the ideal of beauty and love, inspiring writers, poets, and artists throughout human history, Paphos is of outstanding universal value. Pre-Hellenic fertility deities were worshipped in Cyprus from Neolithic times. Many of the archaeological remains are of great antiquity, as Paphos has been inhabited since the Neolithic period. The Temple of Aphrodite represents one of the earliest settlements, while the mosaics of Nea Paphos are extremely rare and rank among the best examples in the world. The architectural remains of villas, palaces, theatres, fortresses and rock-hewn peristyle tombs are of outstanding historical value as they are one of the keys of the understanding of ancient architecture.

Petra tou Romiou, or Aphrodite’s Rock, is a rock that marks the site of Aphrodite’s birthplace, which was a place of pilgrimage for the entire Hellenic world. Excavations have unearthed the spectacular 3rd- to 5th-century mosaics of the Houses of Dionysus, Orpheus and Aion, and the Villa of Theseus, buried for 16 centuries and yet remarkably intact. The mosaic floors of these noblemen’s villas are considered among the finest in the Eastern Mediterranean. They mainly depict scenes from Greek mythology.

Nearby, the stone pillar where St Paul according to tradition was bound and beaten for preaching Christianity. The Chrysorrogiatissa Monastery was founded in the 12th century and is dedicated to Our Lady of the Golden Pomegranate. The neighboring monastery of Agios Neofytos contains some of the world’s finest Byzantine frescoes and icons as well as an interesting Byzantine museum.

The Tombs of the Kings, in Kato Paphos, is a monumental structure carved out of solid rock with some tombs decorated with Doric pillars. Spread over a vast area, these impressive underground tombs date back to the 4th century BC. High officials rather than kings were buried here, but the magnificence of the tombs gave the locality its name.

Palaipaphos (Old Paphos) was one of the most celebrated pilgrimage centers of the ancient Greek world, and once the city-kingdom of Cyprus. Here stood the famous elaborate sanctuary of Aphrodite, the most ancient remains of which date back to the 12th century BC. It is the most significant of a dozen such consecrated sites in Cyprus The glorious days of the sanctuary lasted until the 3rd-4th centuries AD. Amphoras and ceremonial bowls from here, many of which are on display in the Cyprus Museum in Lefkosia, depict exquisitely costumed priestesses as well as erotic scenes from the sacred gardens that once surrounded the temple.

Originally a Byzantine fort built to protect the harbour; it was rebuilt by the Lusignans in the 13th century, dismantled by the Venetians in 1570, and rebuilt by the Ottomans after they captured the island in the 16th century.

The time I saved visiting Choirokoitia was more than used visiting Paphos.

The archaeological park a Paphos is the ruins of an entire city which was once an extremely important port in the Mediterranean. Today has some of the best-preserved floor murals dating back to the Roman era.

The archaeology park is located near the coast and requires driving through the entire city to reach it.

The entrance fee is €4.50, which is very reasonable for the size of the attraction. Expect to spend about 2 hours there and you should probably bring water and a hat as almost everything is out in the open and Cyprus can be quite hot and sunny.

In addition to the archaeology park, there are also several other attractions which are part of the world heritage site which you can visit if you have time.

Paphos is a cultural UNESCO World Heritage Site in Cyprus. It is a coastal city located in the southwestern region of Cyprus. During the antiquity period, there are two cities called Paphos. The Old Paphos is now known as Kouklia. The other one is called New Paphos.

The spectacular value of the ancient remains at the site is one of the reasons why it is considered as a UNESCO site. In fact, Paphos was named as the European Capital of Culture for 2017. It is part of the larger Paphos Archaeological Park, which covers one of the most important ancient Greek and Roman cities.

Paphos is an important ancient Roman and Greek city in the southwestern portion of Cyprus. It is recognized as part of the Paphos Archaeological Park in the same region. This park is still largely being excavated today, particularly the coastal section of the city. However, there are already plenty of remains that are considered culturally valuable that had been excavated from the site.

The monuments and sites that are recognized as part of the UNESCO site Paphos were dated back to the prehistoric times. There are also several ruins that had been traced to the Middle Ages. There are a few key significant monuments that were excavated at Paphos such as the elaborate and large Roman villas – there are four of them! These villas are as follows:

This villa is exceptionally rich and expansive. It measures a total of 200 square meters in land area and is known for its mosaic floors. These mosaic depict hunting scenes, vintage, and mythological creatures. This Roman villa was reportedly constructed around 2nd century AD. It consists of a central courtyard and the rooms are arranged around that central atrium.

Only three rooms had been successfully excavated from this ancient Roman villa. The mosaic floor on this villa is where you will find the most exceptional works of Roman art during ancient times. It is also the one that is highly discussed by scholars. The wall of this villa had collapsed and was restored.

This large villa served as the home of the Roman governor and is split into numerous rooms that served official functions and for private use. The name of the villa is from the beautiful mosaic of Theseus that was found within it. This villa was built during the second half of the 2nd c. AD.

This theater is located on the northeastern part of the ancient city of Paphos. It was dated to have been built around the end of the 4th century BC. It was excavated in 1995.

Aside from these Roman villas, there is also a necropolis that has been dubbed “Tombs of the Kings” found at the site. There are more outstanding ancient remains that were excavated on the site that added to its universal cultural and historical value.

According to archaeologists, the city of Paphos was probably built by Nicocles during the end of the 4th c. BC. He was the last king of Paphos.