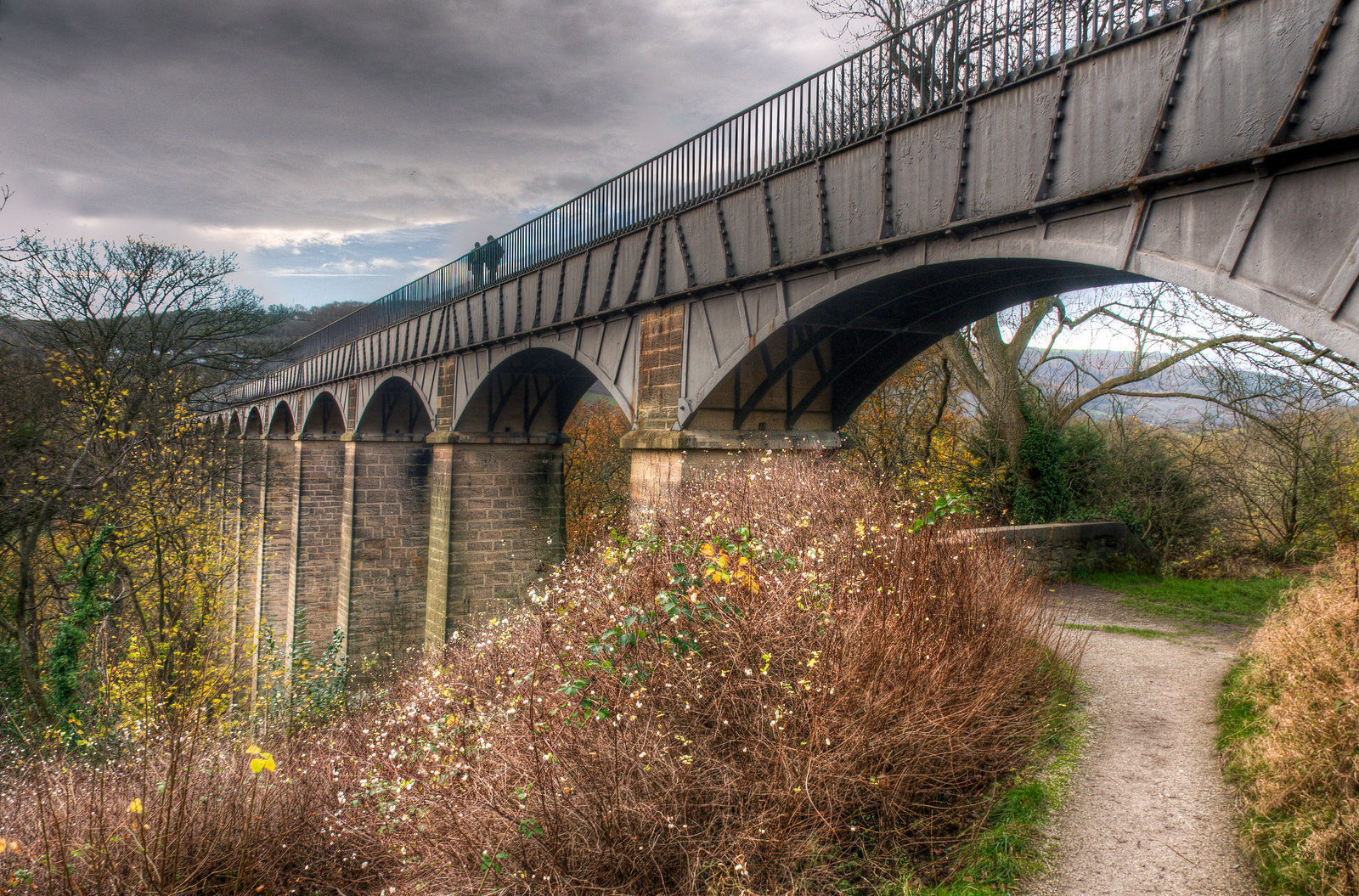 From the Pontcysyllte Aqueduct and Canal World Heritage inscription:

The Pontcysyllte Canal is a remarkable example of the construction of a human-engineered waterway in a difficult geographical environment, at the end of the 18th century and the start of the 19th century. It required extensive and boldly conceived civil engineering works. The Pontcysyllte Aqueduct is a pioneering masterpiece of engineering and monumental architecture by the famous civil engineer Thomas Telford. It was constructed using metal arches supported by tall, slender masonry piers. The Pontcysyllte Aqueduct and Canal are early and outstanding examples of the innovations brought about by the Industrial Revolution in Britain, where they made decisive development in transport capacities possible. They bear witness to very substantial international interchanges and influences in the fields of inland waterways, civil engineering, land-use planning, and the application of iron in structural design.

Of the many world heritage sites I’ve visited, I’ve had the biggest surprises visiting the industrial-themed sites. They don’t get the same amount of attention as the ancient sites do, but they are just as important to the development of the modern world.

The Pontcysyllte Aqueduct doesn’t look like much at first, but at the time it was constructed in 1805, it was truly a wonder of the world. The aqueduct carries water traffic 126 ft (38.4m) above the valley which it crosses. It is considered perhaps the greatest engineering achievement of the great 19th Century engineer, Thomas Telford.

The aqueduct can be cross on foot or by canal barge. During the summer, there are many barges that carry passengers across the aqueduct.

The Pontcysyllte Aqueduct and Canal is a cultural site added to the list of UNESCO World Heritage Sites in Wales in 2009. It is a navigable aqueduct that transports the Llangollen Canal through the Welsh River Dee. The stone and cast iron structure was officially opened in 1805 and took 10 years to build. It is comprised of 18 arches with a total length of 307 meters and a height of 38 meters. The structure was designed by Thomas Telford.

It is one of the Grade I listed building that was included in the UNESCO World Heritage Sites. A Grade I building is something that is considered of special architectural style, or historical and cultural significance.

About Pontcysyllte Aqueduct and Canal

The Pontcysyllte Aqueduct and Canal is recognized by UNESCO for its natural beauty and industrial design. Aside from Thomas Telford, architect William Jessop also collaborated on building this cast-iron aqueduct on the Welsh-English border. After two centuries, it remains standing and is a landmark that earned its spot in the World Heritage Site list.

The aqueduct also played a critical role in the central section of the Ellesmere Canal. This industrial waterway served as a commercial link for the River Mersey and River Severn. This project was not completed, however as the contractors realized that it would cost beyond their capacity to complete the project. Any other work was ceased until the aqueduct was completed in 1805. Eventually, a cheaper construction course was explored.

Below are some interesting facts you might want to know about Pontcysyllte Aqueduct and Canal:

2 thoughts on “Pontcysyllte Aqueduct and Canal”