Skip to content
This leg of the trip I’m on was never intended to be much more than an opportunity to see some of Europe that I hadn’t seen, before I head off on a cruise from Venice. My three days in Prague was nowhere near enough time to really explore the city, especially when you factor in a day of recovering from the flight over. Thankfully I should be back here in November for TBEX Europe where I can see some of the things I missed.

Here are some of my thoughts from the few days I’ve spent here:

English is a Germanic language with heavy French influence. In most Western European countries I can figure out what signs say even if I don’t know the language because there is some English word which is similar. In the Czech Republic, that is totally out the window. (Excuse the pun) They use the same western alphabet but trying to decipher it is impossible just using the knowledge I have of romance and Germanic languages. It sort of feels like I did when I was in Vietnam. They too use western characters, but you can’t derive pronunciation or meaning from what you know. (Yes, I am well aware that Vietnamese and Czech have nothing in common).

For some reason, I had the impression Prague was a rather cheap city to visit. That is not the case at all. It isn’t the most expensive city in Europe, but it is also not the cheapest. I’d guess 10 or 20 years ago it was a real deal to travel here, but now it is just like visiting any other major European city. Czech Tourism arranged for me to have a guide for an afternoon to walk around the city. The guide they picked, Milos, couldn’t have been better. He was probably in his 50’s or 60’s and seen first hand all the changes which had happened to his country. He would show me a spot that was relevant hundreds of years ago, and then show me where Vaclav Havel goes to have a beer. Almost every time I’ve had a local guide show me around a city, it has been a great experience and they point out things I would otherwise never have noticed. 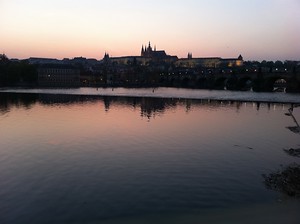 I was last in Europe about a year ago and I got used to routine of walking around a city with my camera. Most European cities are very walkable and I got used to walking everywhere I went. Since then I’ve done most of my traveling in North America, the Caribbean, and Asia where I got out of the habit of walking around with my camera and bag. I’ve been doing it again the last few days and my entire body is sore. I also made it a point of getting up at 5 am today to take sunrise photos on the Charles Bridge. At that hour, the only people I saw were other photographers. I guess that I normally walk at least 5 miles a day when I’m out taking photos, all of that with my camera bag and tripod. This is my first trip to the former Soviet block. Growing up during the Cold War I have this mental image of drab concrete buildings. I have seen none of that during my time in Prague. My hotel in Prague was the Jalta Hotel. My guide Milos told me that it was one of the best examples of socialist realism architecture in the city, and had he not told me I would never have guessed. The renovations on the inside made it look rather modern and not drab at all. I never even would have guessed it from the facade. The one thing the hotel did have which was fascinating was a cold war era bomb shelter. The hotel manager told me it was designed to house Warsaw Pact generals in the event of a war.

Much of the Czech food had wheat in it so I wasn’t able to have any. What I did have struck me as being very similar to German food, which makes sense given its location. Lots of pork, chicken, cabbage, and potatoes. When I explained to Milos that I couldn’t drink beer I don’t think I’ve ever seen someone look so sorry for me before.

Tomorrow I head to the town of Budweis where I’ll be taking photos of two nearby UNESCO World Heritage Sites: The Historic Centre of ?eský Krumlov and Holašovice Historical Village Reservation. Then I’m off to Vienna for two days before heading to Bratislava and Ljubenja.