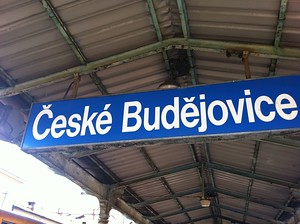 Over the course of the last four years, only a small fraction of the things which happen to me end up on my website. Most either don’t merit a mention or sometimes I forget to write about it.

Today something happened that I didn’t think twice about when it occurred. They were simple enough events but are the sort of things that petrify some people and keeps them from traveling.

My goal today was very simple: I was going to get on the train in the Czech city of Ceské Budejovice (Budwise) and go to Vienna. I would have to make one train switch near the border, but that was it. It should be pretty easy considering there is no border control you have to pass through.

The first problem occurred at the Ceské Budejovice train station. I went to purchase a ticket to Vienna but the woman at the window said I had to go to the international ticket window. Problem was, no one was at the window. In fact, there was a curtain covering the window. I waited and waited until it was almost time for the train to leave.

Not wanting to miss the train, I purchased a ticket to Ceské Velenice which is the border city where I had to switch trains. The schedule showed a 10 minute window where I could run in and buy my ticket to Venice before the next train left.

Either way, buying my ticket didn’t seem in the cards. Eventually someone told me to go to platform 2 to get on the Vienna train. I told them I didn’t have a ticket, but they either didn’t understand nor care.

Once on the train the conductor told me I could just buy a ticket there, but there were two problems: 1) He couldn’t accept credit cards, and 2) I didn’t have any Euros.

So there I was on the train, in a foreign country with no ticket and no means of paying for a ticket.

This is the type of scenario that scares many out of traveling. In the course of 90 minutes I had to deal with language issues, money issues and booking issues.

I’ve spoken with many people who can rattle off a long littany of fears they have about traveling:

These are all valid concerns, but none of them should be deal breakers. Things like this happen all the time and they can be dealt with easily. The thing is, you don’t know how you will deal with it until you actually have to confront the problem.

When the ticket window was closed for me, I just got a ticket to a closer city.

How did I pay for the train ticket to Vienna? When we got into the station, I went with the conductor to the ticket machine and purchased a ticket for the same route going to opposite way. I handed him the ticket and everyone was happy. (Of course, this could have been avoided if I just had some Euros on me before I left.)

I’ve often said that the ability to adapt is more important than the ability to plan when traveling. The things I experienced today happen all the time to me. So much so that I usually don’t even bother to mention it.

Just the day before when I arrived in Ceské Budejovice, I had no idea where my room was in relation to the train station. I relied on my wits and experience and went to nearest McDonald’s where I knew I’d find an open wifi connection. I pulled up a map on my iPhone and got a walking route. If there wasn’t an open wifi connection, I would have had several other options including getting a taxi at the train station.

When confronted with unexpected obstacles, you will figure out how to get around them. Everyone does.

Don’t let fear of the unknown stop you from exploring the world.

19 thoughts on “Dealing With The Unexpected While Traveling”