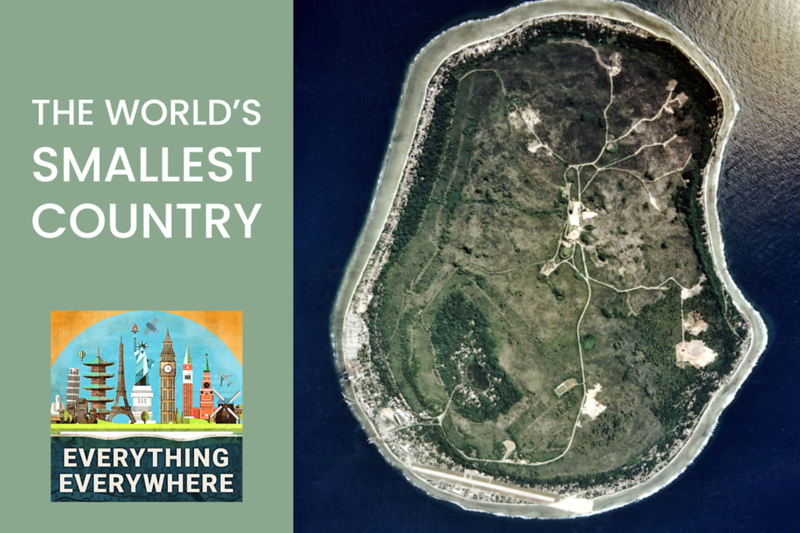 How small can a country be and still be a country?

There is one country that has managed to remain an independent republic for over 50 years with a population of only about 10,000 people.

Learn more about Nauru, the smallest country in the world, on this episode of Everything Everywhere Daily.

I’ll start by addressing the question that many of you are probably asking?

It is basically a legal creation for political purposes. It has a fascinating story, and I will be doing a future episode on it, but I’m going to put it aside for the moment.

So, if we look at countries with an actual self-sustaining population, the smallest country would be the nation of Nauru.

The best current estimate of the population of Nauru is 10,670 people.

The entire country has the same population as a small town, and barely so as many people define the cutoff limit for a town as 10,000 people.

Nauru is located in the middle of the Pacific Ocean, about halfway between Hawaii and Australia, lying just south of the Equator.

Unlike most other countries in the Pacific, Nauru is not an archipelago of islands. It is one single island that sits by itself in the ocean. Its land area is 21 km2 or 8.1 mi2.

So why is such a small island an independent country? Why isn’t it part of some larger nation with other islands in the region?

The story of Nauru is fascinating and its history is unlike any other country in the world.

It is estimated that humans have been on Nauru for at least 3,000 years. Early inhabitants of the island survived on a diet of fish, coconut, and pandanus fruit. They also developed a system of aquaculture where they raised fish in their lagoon.

Water was always a challenge, as the only source of freshwater was rainwater.

Eventually, 12 tribes developed on the island. They would frequently fight with each other and there wasn’t a unified government on the island. Today, the 12 tribes and recognized in the 12 pointed star on the Nauruan flag.

Given how remote Nauru is, it was one of the last places on Earth to have contact with European explorers. It happened in 1798 when the British trading ship Hunter, saw the island. It was dubbed Plesant Island by the sailors.

Nauru wasn’t a regular stop for sailors and the island didn’t have regular contact with Europeans.

By 1828, regular contact had developed and the islanders began trading for firearms and alcohol. The firearms were used in a devastating civil war that lasted from 1878 to 1888. The war reduced the population of the island from 1400 to about 900.

It was in 1886 that the Germans took over the island from an agreement with the British. In 1888 they landed, marched around the island, rounded up all the chiefs, and ended the civil war.

The German occupation lasted until WWI when it was taken over by Australia, who then ceded control to the British in 1920.

It was in 1900, during the German occupation that the thing which changed the course of Nauru’s fate was discovered: phosphate.

Nauru was a phosphate island.

Basically, for thousands of years, birds landed on Nauru in the course of their migrations. As such, the island had thousands and thousands of years of bird poop that had accumulated. All of that guano was incredibly rich in phosphate, which is used as a fertilizer.

World War II was very hard on Nauru. It was one of the only places in the world attacked by both the Germans and the Japanese. In 1940 it was bombarded by a German Cruiser. In August 1942, it was occupied by the Japanese.

The Nauruans were used in forced labor and were subject to frequent punishments and executions. Of the 1,800 people on the island at the time of the Japanese invasion, 1200 were sent to the island of Chuuk as laborers and only 737 returned. Of the 600 who remained on the island, only 400 survived.

After the war, Nauru found itself like many British colonies: looking for independence.

By the time they achieved self-governance in 1966, much of the phosphate on the island had been mined. Guano is a very limited resource. Birds only pooped so much.

In 1967 Nauru purchased the assets of the British phosphate mining on the island, and in 1968 they became independent.

Nauru was entering its golden era.

While much of the phosphate had been mined, there was still a lot left.

In the 1970s, with all of the phosphate money staying in the country, the per capita income in Nauru was close to the highest in the world. It had reached $50,000 per person.

However, this wasn’t going to last very long.

They invested in an airline that covered much of the Pacific, but most of the flights were under 20% capacity.

They invested in overseas real estate, all of which ended up being sold.

Most famously, they invested in Leonardo the Musical, which was a musical that was released on London’s West End. It was a flop.

With the very finite phosphate reserves having run down to just a dribble, and their trust fund having been squandered, it was hard times for Nauru.

The low point was when the only airplane in the airline which was owned by the country, and which connected the entire country to the rest of the world, was repossessed in 2005 for lack of payment.

Nauru’s problems weren’t just financial. The phosphate mining was surface strip mining. The inner 80% of the island was rendered into an uninhabitable moonscape.

The island has become dependent on importing everything from the outside world, including, and especially food.

Most islands in the Pacific suffer from high rates of obesity and diabetes. Nauru has the highest rates in the entire world. In terms of Body Mass Index, 97% of men and 93% of women are overweight or obese. They also have the world’s highest rates of type 2 diabetes.

Outside of a very dwindling supply of phosphates, one of Nauru’s biggest assets is in fact its sovereignty. Even though it only has 10,000 people, it is still an independent country, and as such, its recognition has some value.

It is one of only a few countries that recognize Taiwan instead of the People’s Republic of China. In exchange, they get aid from Taiwan. In fact, when their plane got repossessed, it was Taiwan that got them a new one.

One of their biggest moneymakers over the last 15 years has been hosting a detainment facility for refugees who tried to get into Australia. When refugees show up in Australia, they are shipped off to Nauru, where they are out of sight and out of mind. Nauru makes money and Australia gets to export a problem.

You would think that a tropical island would get tons of tourism, but the reality it is one of the least visited countries in the world. It isn’t easy to get to, there isn’t much to do when you get there, and they have a visa policy that is the most restrictive in the Pacific. No matter what country you are from, it is probably easier to visit almost any other country in the region.

The country is unique in that there really is no capital city. There really aren’t any cities at all. If you look up the capital of Nauru it will say Yaren, but in reality, that is just the name of one of the districts the island is divided into. It isn’t a capital city per se.

Nauru has a unique holiday called Angam Day. It celebrates the day the population of the island passed 1500 people back in 1932, which is believed the be the minimum size of the population necessary for survival on the island.

The most popular sport in Nauru is Australian Rules Football, making it one of the only countries outside of Australia which actively plays the game.

One sport where they really perform well internationally is weightlifting. They have had several weightlifters who have competed at the highest levels of international competition, which is remarkable for a country that is so small.

So, what is the future for Nauru?

The Australian detention facility it runs probably isn’t going to be around forever. It has garnered a great deal of controversy in Australia regarding the conditions in the facility. When that is closed, a significant part of Nauru’s GDP will disappear.

They are scrapping phosphate leftovers now, and even that isn’t going to last much longer.

80% of the island is inhospitable and mostly devoid of vegetation.

No matter what happens, Nauru has a tough road ahead.

Today’s five-star reviews come from listener LearnedLesson over on Apple Podcasts in the United States. They write:

As a fellow Green Bay Packer shareholder, I found that episode to be very informative and extremely enjoyable (and I am still chucking over the post-credit item). I have also shared that episode with other NFL fans. Generally, I get both considerable information and personal enjoyment out of your podcast. Discovering Everything Everywhere last year, made 2020 a little less depressing. Thank you.

Thank you LearnedLesson. The season this year didn’t end as we hoped, but I’m quite confident that next year will be championship number 14.