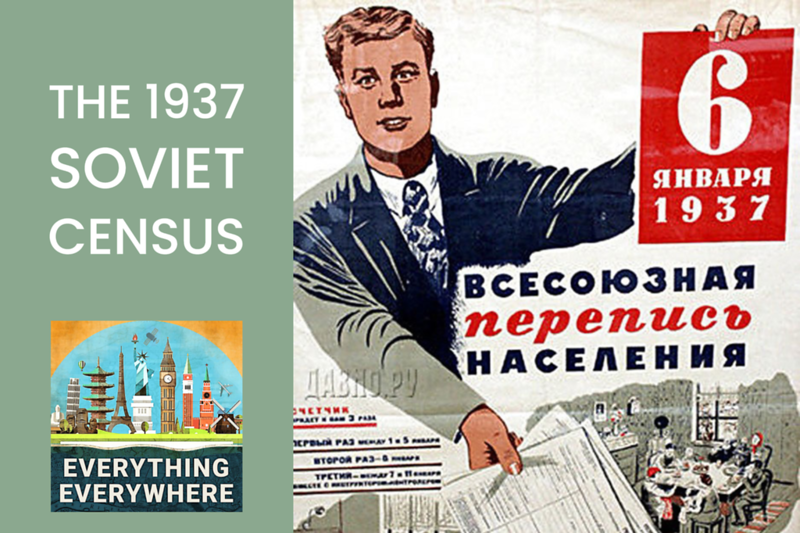 In 1936, Soviet leader Joseph Stalin determined it was time for the Soviet Union to have another census.

They hadn’t conducted one since 1926 and he wanted some actual numbers to show the world the success of the Soviet system.

Needless to say, the numbers were not what Stalin had expected….and promised.

Learn more about the 1937 Soviet Census, the census that exposed Stalin, on this episode of Everything Everywhere Daily.

Today’s audiobook recommendation is Stalin: New Biography of a Dictator by Oleg Khlevniuk

Josef Stalin exercised supreme power in the Soviet Union from 1929 until his death in 1953. During that quarter-century, he caused the imprisonment and execution of no fewer than a million Soviet citizens per year. Millions more were victims of famine directly resulting from Stalin’s policies. What drove him toward such ruthlessness?

This essential biography, by the author most deeply familiar with the vast archives of the Soviet era, offers an unprecedented, fine-grained portrait of Stalin, the man, and the dictator.

The history of the late tsarist era/early soviet era censuses isn’t great. The country had undergone an incredible amount of turmoil over the last several decades, and gathering data during that period was difficult, to say the least.

The previous proper census occurred way back in 1897 by Tsar Nicholas II. Even then, when things were relatively peaceful, taking a census in Russia was a difficult proposition. Russia is big. Really big.

Back in 1897, it wasn’t very developed so there were a lot of communities that were very difficult to reach.

After 1897, censuses were attempted during WWI and the Russian Civil War, but for obvious reasons, the chaos of the times made an accurate count next to impossible.

By the time the 30s rolled around, Stalin was in power and he wanted to show to the rest of the world, and to the rest of the Soviet Union just how great things were.  In a meeting with party leaders in 1935, he said the following:

Everybody says that the material situation of workers has dramatically improved, that life has become better and more fun. It is of course true. But this has led the population to breed much faster than in the old days. The birth rate is higher, the death rate is lower and the pure population growth is far stronger. It is of course good and we welcome it. Now every year we have a population growth of three million souls. It means that every year we grow as much as the whole of Finland.

Stalin viewed population growth as a proxy for economic and societal success.

The entire census was scheduled to take place on a single day: January 6, 1937.

The census questions were professionally done, but Stalin had to stick his fingers in it. The questions which made it to the census were pretty open ended and open to interpretation.

In particular, there was a question on religion which many people took to be a trick question to get them in trouble with the officially atheist government.

When the big day arrived, people were counted all over the country. By doing it in one day, it wouldn’t be affected by changes in population which take place during a longer census.

When the final count was tallied, the results……were not what Stalin expected.

For starters, 56.7%  of the country identified themselves as being religious. This didn’t really look good when you had a communist government that was officially atheist.

The big thing, however, was the population numbers.

The population wasn’t 180 million people like Stalin insinuated. The final count was about 162 million people, about 7 million more than the last census. Population growth for sure, but nothing like what Stalin had promised.

So what did Stalin do?

He did exactly what you’d expect Stalin would do.

..and then of course the executions started.

The problem was that the people running the census tried to actually do their jobs. They did a count of the population as best as they could given the circumstances.

Stalin, however, didn’t care about getting accurate data. He wanted propaganda.

Given that every single person in the country literally took part in the census, it wasn’t something they could just pretend never happened.

In September in an article in the Soviet newspaper Pravda, explaining why the census data couldn’t be released.. It noted that “enemies of the people gave the census counters invalid instructions that led to the gross under-counting of the population, but the brave NKVD under the leadership of Nikolai Yezhov destroyed the snake’s nest in the statistical bodies”

Spoiler, Nikolai Yezhov ended up getting arrested and executed himself in 1940.

Another census was held in 1939, and this time the results were more to Stalin’s liking. In fact, given what happened to the people running the census in 1937, everyone got the gist of what was expected this time.

In the 1939 census, the results were exactly what Stalin announced back in 1935.

The Soviets never conducted another census for 20 years, until Stalin was dead and no longer in power.

The results of the 1937 census were buried for over 50 years, and it wasn’t until the fall of the Soviet union that researchers were able to uncover what had been covered up by Stalin.