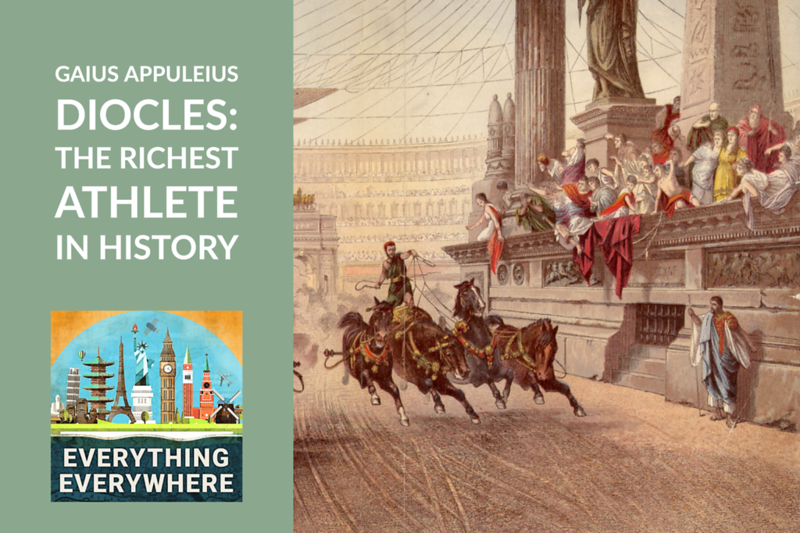 Who do you think what the wealthiest athlete in history? Maybe Michael Jordan. Perhaps Tiger Woods or Roger Federer. Or maybe Lionel Messi or LeBron James?

Well, historically speaking, if you added up the fortunes of all of those people, they probably couldn’t compare to one man who competed in ancient Rome. A man who put his life at risk far more than any golfer or tennis player.

Learn more about Gaius Appuleius Diocles, the richest athlete in history, on this episode of Everything Everywhere Daily.

This episode is sponsored by the Out Travel the System podcast.

I know you love to hear the story behind the story – so let me tell you why I think you might want to listen to the Expedia podcast Out Travel the System.

In this season alone, the show talks to someone on a mission to visit every country in the world (in case you were wondering, the tally stands at 194 out of 197 countries).

There’s the man who has visited and stayed at literally thousands of hotels, who shares some of his favorite unique accommodations and experiences.

Or how about the woman who has reached some deep philosophical conclusions about travel and privilege, in no small part because of the pandemic?

Get all of this and more when you tune into the show, including larger insights about the future of travel, as well as tips and tricks to maximize your savings for your next trip – whenever you feel ready to head into the world again. You can find Out Travel the System on your podcast platform of choice.

If you are a top-tier modern professional athlete, you can make an astonishing amount of money.

The money comes not just from their salary or from competitive winnings, but also from endorsement deals.

Determining the net worth of athletes is notoriously difficult as they are under no obligation to disclose their financial status, and no one has any clue what they spend or the status of their investments.

Nonetheless, using the best estimates available, there is one bonafide billionaire athlete, and that is Michael Jordan. He made the vast majority of his money off of endorsement deals, primarily with Nike, and via investments, primarily his ownership of the Charlotte Hornets.

Almost all of the names I listed are either active or were competitive in the last 20 years.

Ultra-rich athletes may seem like a very recent phenomenon.

Compare that to Lionel Messi who in 2017 signed a contract worth almost $675 million dollars for four years.

However, if we go back far enough, really far, we can actually find a period that also had ultra-wealthy athletes: Ancient Rome.

The biggest sport in ancient Rome wasn’t gladiatorial games, despite the fact that they are what get most of the attention in movies. They were popular to be sure, but the number of spectators that could sit in an amphitheater was limited, and given the nature of the activity, you couldn’t really do it all the time.

The big sport was chariot racing.

Chariot racing was huge and in Rome itself, the primary venue for racing was the Circus Maximus, which could hold a quarter of a million people.

You can still see where the Circus Maximus was located today and you can see the outline of the track.

When the poet Juvenal spoke of appeasing the masses with “bread and circuses”, chariot racing was what he was talking about.

In an earlier episode, I talked about the Nika Riots in Constantapole which took place in the year 523.

Just to give an overview, the common people, and many aristocrats were fanatical about chariot racing.

The chariots were divided up into teams: the red, the white, the green, and the blue. Each team would usually have three chariots in each race.

On race day, there would have been 24 races consisting of 7 laps each, and the majority of races were with quadrigas, which are teams of four horses.

There were on average 66 days a year that had races. They would usually be organized by aediles, which was an elected position. An aedile that did a good job organizing games would have their name known by the public and it would help them eventually achieve higher offices such as consul.

Individual charioteers were recruited by the teams and would win prizes based on their performance. Only charioteers placing in the top 3 would earn prize money.

This finally brings us to the subject of this episode.  The man who was probably the most famous and successful charioteer in history: Gaius Appuleius Diocles.

Diocles was born in the Roman province of Lusitania in what is now Lamego, Portugal, in the year 104.

He began chariot racing when he was 18 in what is today Lleida, in Catalonia, Spain.

He won some of his first races and was recruited by the white team to race in Rome.

The whites weren’t one of the top teams, and they often recruited charioteers from the lower classes of society and from the provinces to compensate.

After some early success, he was recruited a few years later at the age of 24 to race for the Green Team. The greens were the premier team in Rome. They would have been the equivalent of the Green Bay Packers in both success and team colors.

So, why did Diocles make so much money?

For starters, Diocles was good. Really good. He was the winner or runner-up in 75% of the races in his career, and remember you only got paid if you were in the top 3.

However, he had something else going for him. Showmanship.

What is often did is let himself get behind on the last lap so he could then overtake the leader in a dramatic finish. He would do this all the time and became quite good at it.

The crowds would go nuts, which drew more people, which resulted in larger purses.

Because there were 24 races in a day, he could easily bring in as much money in a single day as a Roman procurator could make in a year.

The other secret to his success was longevity…and I mean this in the most literal sense.

The life expectancy of a charioteer was very short. One famous charioteer named Scorpus won over 2,000 races, more than Diocles. However, he died at the age of 27 during an in-race collision.

If you want an idea of how dangerous chariot racing was, just watch the race scenes from any of the three versions of Ben Hur, preferably the 1959 version. The chariot racers literally had their wrists tied to the reins of the horses. If there was a crash, they could be dragged around the track by their team.

Diocles managed to have a 24 year without any major accidents.

He actually left the Green Team at the age of 27 for the less successful Red Team. The speculation is that he did so, so he could be the undisputed best on the red team, whereas there were probably riders comparable in talent to him on the Greens.

Most fans only followed teams, but when he switched to the Reds, many people still supported him because he was so beloved.

Trying to make comparisons in wealth from ancient periods to today is extremely difficult to near impossible. Populations were different, productivity has improved exponentially, and what you could buy with your money was different.

However, we do know that Diocles was unquestionably one of the richest people in Rome when he retired. His wealth was only surpassed by a few senators and the emperor himself.

He had enough money to feed all of Rome for a year or pay for the entire Roman military for several months.

Using these purchasing power comparisons, it is estimated that his fortune would be worth around $15 billion dollars today.

When he retired at the age of 42 he purchased a villa in the Italian countryside and retired. From there, he vanished from history.

The only reason we know as much about Diocles as we do was because of his fame and success on the track.

So the next time you hear of some athlete making an obscene amount of money, just remember that they still can’t hold a candle to the richest athlete of all time: Gaius Appuleius Diocles.