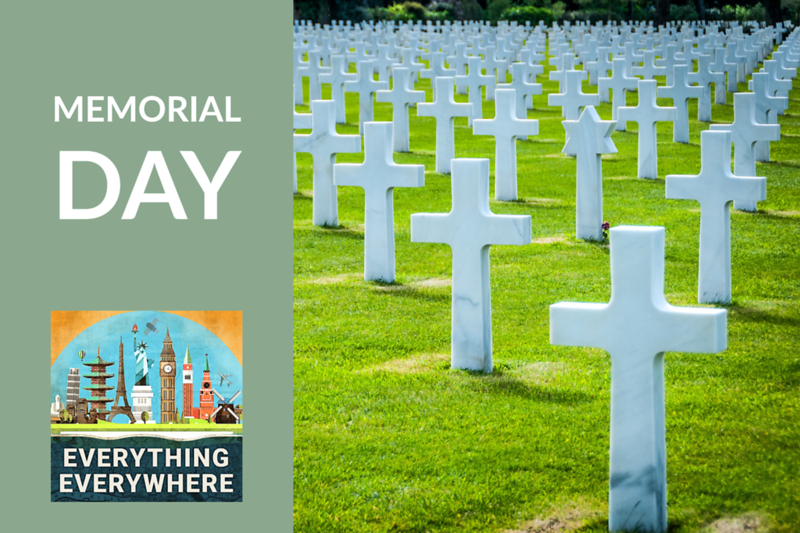 Every year, on the last Monday in May, the United States honors its war dead. It is often celebrated with parades, cookouts, and ceremonies at military cemeteries.

While many people just think of it as a three-day weekend and the beginning of summer, it is a tradition that extends back over 160 years.

Learn more about Memorial Day, how it got started, and how it is celebrated, on this episode of Everything Everywhere Daily.

My audiobook recommendation today is On Hallowed Ground: The Story of Arlington National Cemetery by Robert M. Poole.

More than just a fascinating account of how Arlington came into being at the end of the Civil War, On Hallowed Ground also tells the story of America as reflected in her greatest national cemetery. The history of the land on which the cemetery is built is as varied as our nation’s, evolving from its earliest days as Robert E. Lee’s ancestral home to a Union headquarters, a haven for freedmen, and finally a burial ground. Robert Poole also shows how the landscape of Arlington changed along with our democracy.

The holiday of Memorial Day is a uniquely American holiday. While most countries have a day that honors their war dead, having such a day at the end of May is unique to the United States.

Not surprisingly, the roots of Memorial Day go back to the US Civil War.

It began with decorating the graves of fallen soldiers. This is certainly not an American practice. It has been done for hundreds if not thousands of years all around the world.

The practice of grave decoration was being done in the South even before the war had ended. Women would festoon headstones of fallen relatives and loved ones with flowers.

What organization for grave decoration that existed was mostly done at the local level. A town would organize a ceremony to honor their war dead.

After the civil war, the tradition took hold in the North. Many historians believe that the practice of decorating soldier’s graves with flowers really took hold after the assassination of Abraham Lincoln.

In the wake of the Civil War, with so many dead and injured, veterans organizations began to spring up all over the country. These veterans groups provided a focal point for memorial efforts for the war dead.

Just three years after the end of the war, former Union General John Logan was the head of the newly formed Grand Army of the Republic or the GAR. The GAR was a fraternal organization of Union Veterans of the Civil War.

On May 5, 1868, he issued a deceleration calling for the creation of a Decoration Day to be observed nationally and annually on May 30th. The selection of May 30th simply had to do with the fact that by the end of May, flowers should be in bloom everywhere in the country.

Decoration Day caught on quickly. In 1868 there were 183 celebrations in 27 states, and the next year there were 336.

At this point, the day was still unofficial. It was mostly organized by veterans groups.

In 1871, Michigan became the first state to formally recognize Decoration Day as an official holiday, and every Northern state followed suit over the next 20 years.

The holiday began to change during the administration of Woodrow Wilson.

Wilson was the first southerner elected to President since the end of the Civil War. By his administration, the number of Civil War veterans had dwindled, and more importantly, the number of US War Dead had grown after the Spanish American War and of course World War I.

There was a movement to expand the scope of Decoration Day beyond just the fallen from the Civil War.

Annual gatherings of Civil War veterans were a common occurrence. In 1913, a “Blue-Gray Reunion” was held in Washington DC for veterans from both the Union and the Confederacy. This reflected a decrease in the bad feelings which had existed since the end of the war and started a movement towards merging all the national celebrations for fallen soldiers.

With the conclusion of World War I, the day began honoring all fallen American soldiers, and this of course increased even further with World War II.

As the scope of the day expanded, the name of the day began changing as well. Memorial Day began to be used in place of Decoration Day over the years.

Memorial Day was moved from May 30th to the last Monday in May to allow for a three-day weekend. Labor Day, Washington’s Birthday, and Columbus Day were also all moved to a Monday for the same reason.

There is often confusion about Memorial Day and Veterans Day.

Veterans Day in the United States is on November 11, which was the date on which the armistice ending World War I was signed. In other countries, it is known as Remembrance Day or Armistice Day, and the day often serves the same function as Memorial Day serves in the United States.

The tradition of wearing poppies which many other countries observe on Remembrance Day is usually done on Memorial Day in the United States.

Because Memorial Day floats, the earliest it can occur is May 25th and the latest is May 31st.

Because Memorial Day is a Federal Holiday and it is an annual three-day weekend, there are many traditions surrounding the holiday which have nothing to do with honoring the war dead.

Memorial Day has become the unofficial start of summer in the United States. Because the weather is usually good, it usually means cookouts and picnics.

According to fashion tradition, you aren’t supposed to wear a white suit or white dress before Memorial Day. This started in the 1930s when wealthy people would often dress in white during the summer.

So, whether you are having a cookout or just watching sports on the TV, take a moment to recognize the real meaning of Memorial Day and the men and women who made the ultimate sacrifice.