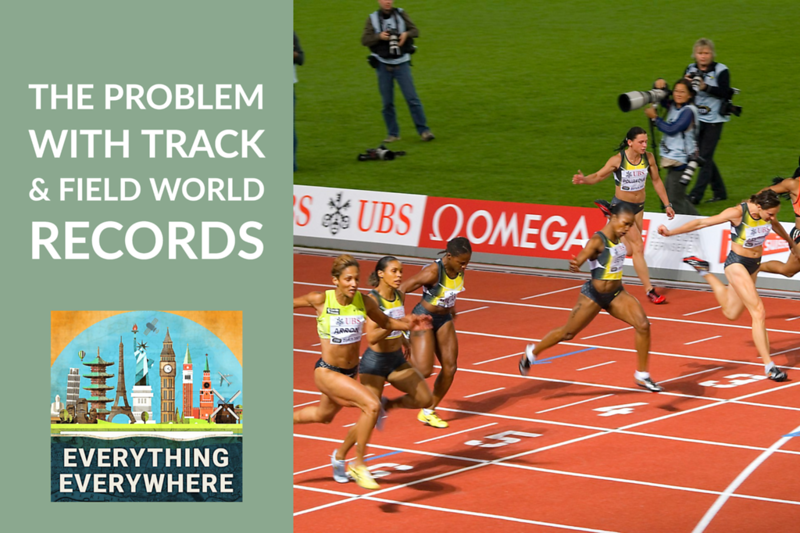 One of the unique things about track and field is that you don’t just compete against your immediate competitors, but you are also competing against the clock or the tape measure.

That means you can compare achievements with people in the past, and that means world records.

You would expect world records to fall over time, but there are a small number of records that haven’t been broken in decades and no one has even come close to breaking them.

Learn more about track and field’s unbreakable world records and why this might be a problem, on this episode of Everything Everywhere Daily.

While almost every olympian is faster and stronger than the rest of us, some elite athletes are the fastest and strongest. They are world record holders.

Even if you never win an Olympic medal or a world championship, if you can hold a world record, it is something that will stay with you forever, even if someone later breaks it.

The reason I’m focusing on track and field is that it is very simple and very easy to compare records and competitors over time. Football, either kind, is not.

So what goes into a world record? Obviously, it has to be an incredible performance. Everything has to come together just right. They don’t happen that often.

When Bob Beamon broke the world’s record in the long jump in 1968, see my previous episode about that, the conditions were perfect. He had the maximum allowable tailwind, it was at a high altitude in Mexico City, he had perfect form, and he put together his best jump ever at just the perfect time.

Since the advent of competitive athletics in the early 20th century, the International Association of Athletics Federations has been keeping world records.

In every event, there has been a progression of world records as people have incrementally bested previous records.

Each event has had a very different progression in how frequent and how recent world records get set.

And this gets into what the real heart of what I want to talk about.

You should expect to see world records being broken at a slower and slower rate over time. As humans approach the limit of human performance it should become harder and harder to break records. Records will require more luck and more people who have the perfect physiques at the very peak of their careers.

This isn’t quite what happened.

In some events, there hasn’t been a new world record set in over 30 years.

Jürgen Schult set the world record in the men’s discus in 1986 at 74.08 meters. To put that in perspective, the gold medalist at the 2019 world championships had a distance of 67.59 meters, a full 6.5 meters or 21 feet short of the world record.

The oldest existing world’s record is in the women 800 meters. Jarmila Kratochvílová of Czechoslovakia set a world’s record finishing the 800 in 1:53.28 seconds. That is almost five seconds faster than the 2019 world champion.

You might notice something that all of these really old records have in common. They are all held by athletes from former communist countries.

If you are thinking that these records might be tainted by performance-enhancing drugs, you aren’t alone.

The fact is, the IAAF and the Olympics didn’t do a very good job of testing for performance-enhancing drugs in the 1980s, and there was rampant doping.  Countries behind the Iron Curtain had official state-sponsored doping programs to give their athletes a competitive edge.

The athletes in these programs really didn’t have any choice in the matter. If they wanted to compete, and to get the perks that came along with being an elite athlete in a communist country, you had to go along with the program.

None of these athletes failed a drug test when the record was set, but all of them have been implicated after the end of the Cold War by people inside sports organizations.

Lest you think this was only a problem in communist countries, the men’s shot put record was set in 1990 by Randy Barnes of the United States. The same Randy Barnes, who was subsequently banned for life for taking performance-enhancing drugs.

Likewise, the women’s 100-meter and 200-meter records were set by American Florence Griffith Joyner in 1988. She suddenly saw a massing improvement in her times in a single season, smashed every world record, then retired suddenly, passing away early at the age of 38.

Her training partner has subsequently confessed that FloJo was taking a cocktail of drugs in 1988 to improve her performance.

These are only the high-profile records. There are many others that were set during the same time period are also highly suspect.

These decades-old records were set at levels that have been unobtainable for athletes since. No woman has even come close to the 800 meters world record. In almost 40 years, the closest anyone has come is 0.7, an enormous difference in elite track and field.

The records have remained out of research despite improvements in training, nutrition, physiology, shoes, and other technology.

So many of these records are so suspect that it has been proposed to simply wipe away every world record which was set before 2005. This was the year that the IAAF began storing blood and urine samples for future testing.

If this rule were implemented, over half of the current world records would be wiped from the books.

There is however a problem with this. Not all of the old world records are tainted.

The world long jump record was set in 1991 by Mike Powell. He broke the legendary record set by Bob Beamon. There have never been accusations of doping around Mike Powell, or Bob Beamon for that matter.

He set the record in an era where the long jump was a much more important and prestigious event. Top sprinters like Carl Lewis and Jessie Owens would compete in the long jump when amateur rules were still strictly enforced.

As track became big money, elite sprinters no long saw a reason to compete in the long jump. Usain Bolt could have been one of the world’s greatest long jumpers, but the money was in sprinting, so he never bothered.

Most, but not all, of the recent records have been in long-distance events, especially the marathon. This is mostly because these races have been less affected by technological changes like rubberized tracks and because the money involved in marathon running has dramatically increased.

Good athletes who might otherwise have competed in the 10,000 meters are now pursuing the marathon because that is where the money is. Incentives matter.

The world’s greatest marathon runner, Eliud Kipchoge of Kenya, was a 5000-meter runner until he turned his attention to the marathon.

So what is the answer? There are clearly old records that are so tainted that they probably should be removed from the record books. Athletes who competed for countries with documented state-sponsored doping programs, and athletes like Randy Barnes who were caught doping, later on, are the most obvious targets.

However, there are some records that were achieved legitimately. The problem is, it is difficult to prove innocence when they were achieved in an era with so much cheating.

If any records are purged from the books, there were certainly be controversy and probably lawsuits. Nonetheless, it might be better for the sport if there were records in place which were at least in the realm of possibility.

Removing a record isn’t the same as overturning the results of a race. There are many would-be records that have never been recorded because they were wind-aided. Removing these records needn’t be any more controversial than disallowing a record with a 3 meter per second wind at your back.

As of right now, many records are so far out of reach they might as well be considered impossible.