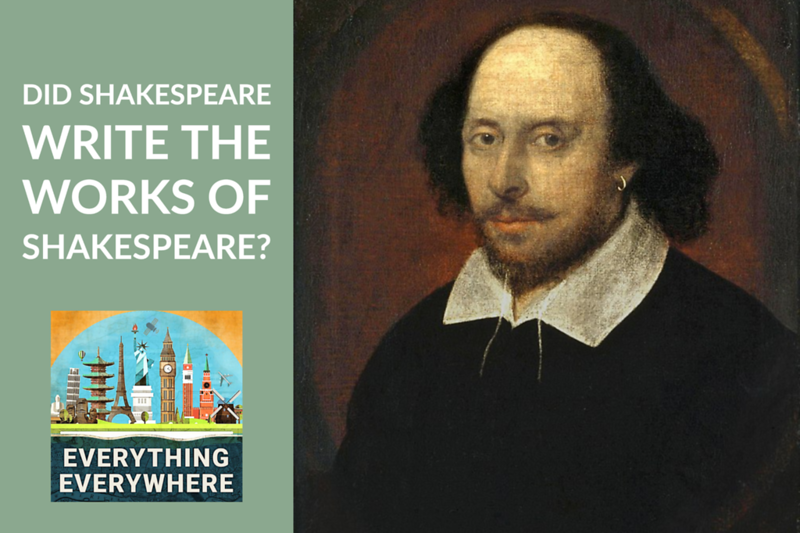 William Shakespeare is widely considered to be one of the greatest poets and playwrights in the history of the English language.

However, over the last two centuries many people have begun to wonder if William Shakespeare of Stratford-on-Avon, England was indeed the person who wrote the works which have been attributed to him.

If you look at the evidence or the lack thereof, they aren’t necessarily crazy for thinking it.

Learn more about if William Shakespeare did in fact write the works of Shakespeare on this episode of Everything Everywhere Daily.

If you are interested in the subject of today’s episode, I’d recommend The Shakespear Enigma. It is a documentary shot on location, with expert interviews discussing the question of Shakespeare’s authorship.

Curiosity Stream is celebrating their 6th anniversary. Now through April 21st, annual plans have been discounted by 40%!

That means a full year of high definition programming can now be had for only $11.99!! That’s one dollar a month!

To take advantage of this limited-time offer, go to Everything-Everywhere.com/CuriosityStream or click on the link in the show notes.

If you haven’t heard it before, the idea that Shakespeare didn’t write the works attributed to him might seem sort of crazy. After all, we have paintings of him and you can go visit his home in the town Stratford, so surely he had to have created the works that have his name attached, right?

That would be like saying Lewis Caroll, George Elliott, Mark Twain, or George Orwell didn’t exist.

…except that none of those people did exist. They were all just pen names.

So the idea that someone might write something under another name isn’t at all a crazy idea.

So where did this idea originate? Why would someone think that Shakespeare might not be the writer behind the works we attribute to him?

For a hundred and fifty years after Shakespeare’s death, he wasn’t considered the greatest English playwright. It wasn’t until the late 18th and really the 19th century that he developed this reputation.

Of his contemporaries, John Fletcher and Ben Jonson were usually rated as better dramatists than him.

As his stature grew, people began to pay more attention and did more research into the life of Shakespeare.

What they found, or what they didn’t find, was troubling.

His father was a glover, meaning that he made gloves. Nothing wrong with that.

However, in legal documents that he signed, he did so with a mark, not with a signature. That is almost always an indication that someone is illiterate.

This in and of itself isn’t proof of anything. Certainly, someone could rise from modest beginnings, even if it was odd that one of the greatest writers came from illiterate parents.

However, Shakespeare had three daughters. One of his daughters used a mark and the other used a signature which appears to be more drawn than written. That indicated that his children were either illiterate or functionally illiterate. Very odd for such a great writer.

If Shakespeare did indeed write his works, then his family’s generations went: illiterate, greatest writer in history, illiterate.

Then there is the issue of Shakespeare’s education.

There is no evidence whatsoever of him attending any school at any level. This isn’t to say that he didn’t attend school, but if he did it was probably no more than a local grammar school. It is almost certain he never attended university.

Yet, he never left England, and there is no evidence that ever was anywhere other than Stratford and London.

Likewise, many of his plays dealt with life at a royal court, something which he would have had no knowledge of.

What about the actual documents? He was a writer, so we could use his actual writings to establish some sort of provenance, right?

Well, there are literally no documents of any sort which were written by Shakespeare that exist. No poems. No plays. No correspondences. No shopping lists. No receipts. Nothing.

In fact, the only samples of Shakespeare’s handwriting that exists are six signatures he left on legal documents and contracts. All six are written in a very shaky hand, and each uses a different spelling of his name. Compared to other 17th century signatures, it lacks the flowing lines and confidence of someone who is literate and well-practiced in writing.

What about his business? Did he make claims about his works and money from it?

In Shakespeare’s will, there is nothing about any writings or written works whatsoever. While 16 of his plays were published after his death, there was nothing in his will which even mentioned them. His children also never made any claims about rights or money from his writing.

His will, which was a catalog of his assets, also didn’t include a single book.

When he died, there were no eulogies or other odes written to him, or even mentions of his death.

I’ll confess that there is no smoking gun here. In fact, unless some 400-year-old document were to be discovered, there probably never will be.

The list actually is much much longer, but the point is, these aren’t crackpots.

His will did leave a fair amount of money to his children and made enough to be buried inside the church at Stratford. The funerary monument inside the church in Stratford today shows him holding a quill and paper, but the original monument, of which there are drawings, only had his hands over what looks like a bag of wool.

The big question then is if Shakespeare didn’t write the works attributed to him, who did?

There have no fewer than 80 different people identified as possible authors, including Queen Elizabeth I herself.

However, there really are only three names that have been given serious attention.

The first is Sir Roger Bacon. He was one of the developers of the scientific method. He was the Lord Chancellor of England and served at court. He was clearly smart and educated enough to be a candidate.

The second is Christopher Marlowe who was a noted dramatist and author in his own right. However, for this theory to hold any water, it involves him faking his death in 1593.

The candidate with the most support, by far, is the 17th Earl of Oxford, Edward de Vere. The group which supports de Vere as the author is known as Oxfordians.

The arguments for Edward de Vere being the author are the flip side to why so many people are skeptical of Shakespeare. All the facts about his life just check all of the boxes.

De Vere was a highly educated aristocrat. He was a regular feature at the court of Queen Elizabeth giving him in-depth knowledge of court intrigue.

He was raised in a house that had its own theater company. He patronized acting companies and was part owner in London’s Blackfriar theater.

He traveled extensively, including spending time in Italy, where many of Shakespeare’s plays are located.

Moreover, surviving writings from members of Elizabeth’s court praised him as both a poet and a playwright….even though none of his plays survive under his name.

So on one hand you have someone with all the pedigree, education, and travel that would be required to write the works of Shakespeare, and was an acclaimed writer, but for whom there are few surviving works.

And on the other hand, you have someone whose name is attached to the works but has almost nothing else which would make sense for him being an author.

Given the circles that the two traveled in, in the theater community in London, they almost certainly knew each other.

At the time, publishing plays and poems were considered low-brow for someone in aristocracy. Moreover, many of the subjects broached in Shakespear’s plays dealt with contemporary issues in a historical context. There would have been concerns about charges of treason or sedition if they could be traced back to someone at court.

Moreover, having an actual person would throw people off the scent of the real author more than a fictitious pen name would.

In this theory, William Shakespeare of Stratford was just a front man or a theatrical broker for de Vere.

Of course, there are those who deny all of this. They are known as Stratfordians. They insist that William Shakespeare did in fact write all of the works attributed to him, and it can all be explained by the fact that he was just a genius.

This entire exercise in the attribution of the works of Shakespeare is ultimately one of circumstantial evidence.

What little we know of William Shakespeare’s life, and we really don’t know very much, doesn’t fit the profile of a great writer. However, there is no hard evidence for anyone else having been the author either.

It is just a lot of tangential facts and coincidences.

Regardless of who wrote the many plays and sonnets attributed to William Shakespeare, the fact remains that they are some of the greatest literary works in the history of the English language.