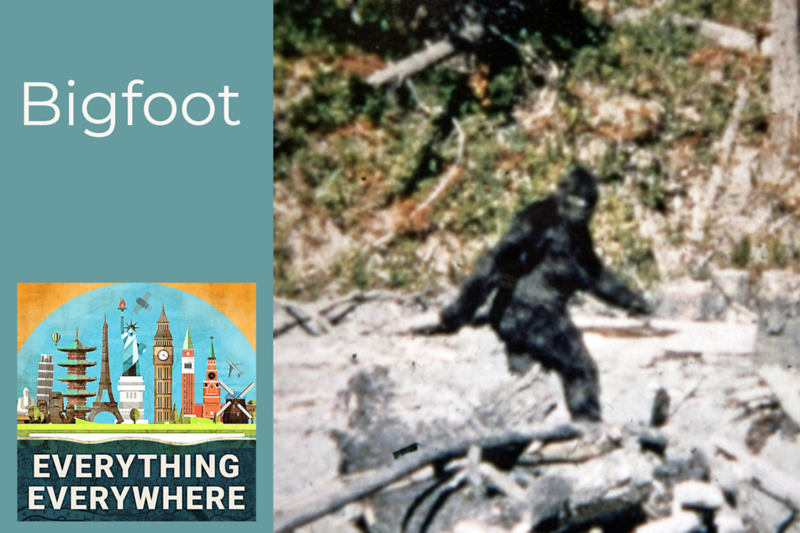 Long before Europeans arrived in North America, native people told stories of large hairy men who lived in the woods.

For the last several centuries, periodic reports of such creatures have appeared all over the United States and Canada.

In the late 60s and early 70s, photos and movies started to appear, which seemed to provide evidence of these creatures…..seemed.

Learn more about the legend of Sasquatch, aka Bigfoot, on this episode of Everything Everywhere Daily.

Long before landing a leading role in Harry and the Henderson’s,  becoming a leading spokesperson for beef jerky, and having a supporting role on the Six Million Dollar Man, stories of bigfoot or sasquatch were circulating amongst the people of North America.

The legend of what we know today as bigfoot existed in many different indigenous North American cultures.

The word sasquatch is actually an anglicization of the world sasq’ets, which comes from the Halkomelem language of British Columbia.

According to the Sts’Ailes (sh’hayles) , sasq’ets was a shapeshifting creature who protected the forest. The name sasq’ets translates to “hairy man.”

The Sts’Ailes were far from the only native people who had a similar legend.

There are petroglyphs in the Tule River Reservation in California, which depict what appears to be a family of large hairy creatures.

In parts of the southeastern United States, there are tales of a creature which is known as “skunk man.”

The Lummi people of the Pacific Northwest talked of a creature known as Ts’emekwes.

The Iroquois people of the northeast United States and Southern Ontario and Quebec had a legend known as Genoskwa, the stone giant.

These aren’t the only legends told by native people. There were many different stories that had similarities: a large humanoid creature with lots of hair and often smelled really bad.

When Europeans began arriving in North America, they shared some of the same stories.

Spanish missionaries in the 16th century told tales of Los Vigilantes Oscuros, or “the dark watchers.”

As Europeans spread across the continent throughout the 19th century, they would often adopt these stories to explain strange noises and events.

Going into the 20th century, tales about this creature were on par with telling your children about the boogeyman. There weren’t cryptozoologists trying to prove the existence of this creature.

In the 1920s, these stories were popularized by one J. W. Burns, who was an Indian Agent and teacher in British Columbia. He retold the stories he heard and popularized the term sasquatch.

What changed everything was an event which occurred in 1958 in Humbolt County, California.  A logger by the name of Jerry Crew discovered a large set of footprints in the Six Rivers National Forest.

He mentioned the footprints to his coworkers, who also recalled seeing similar footprints as well as other unexplained events, such as large objects being moved. The loggers began calling this unknown creature that left the footprints “bigfoot.”

More on this story in a bit.

They eventually contacted a reporter for the Humbolt Times newspaper, Andrew Genzoli, who wrote a story about the footprints and was the first to use the word “bigfoot” in print.

The story made it out onto the newswires and was republished in papers all around the United States, including the New York and Los Angeles Times.

Bigfoot had now become a thing.

Other articles began appearing about bigfoot in the years after the Humbolt Times article. With this article, there began to be bigfoot believers and bigfoot enthusiasts.

One, in particular, was a man by the name of Roger Patterson.

Patterson became a bigfoot believer after he read an article in True magazine in 1959.

In 1966 he published the book Do Abominable Snowmen of America Really Exist? The book was described as “little more than a collection of newspaper clippings laced together with Patterson’s circus-poster style prose.”

In 1967, he began working on a docudrama about cowboys looking for bigfoot. One of the men he worked with on the film was named Bob Gimlin.

In October 1967, the two men claimed to have taken video footage of a bigfoot.

If you have ever seen a video clip of a bigfoot walking sort of hunched over and walking through a river bottom with trees all around….this is that video.

It was supposedly shot on horseback at Bluff Creek, which is a tributary of the Klamath River, in the Six Rivers National Forest.

The video was 59 seconds long, and the image of the creature was rather grainy and out of focus.

This short clip is the most popular piece of evidence that people point to in support of the existence of sasquatch. It just so happened to be filmed by two men who were filming a fictional movie….about bigfoot.

The release of the Patterson-Gimlin film dramatically increased interest in bigfoot and not surprisingly, led to a massive increase in reported bigfoot sightings in the 1970s.

As the number of sightings skyrocketed, so too did the number of locations of the sightings.  The original 1958 article, and the 1967 film, both occurred in pretty much the same place in Northern California.

The interest in bigfoot also increased interest in other supposed creatures, such as the Loch Ness Monster. It ushered in a new craze for these creatures, which was dubbed cryptozoology.

It has been estimated that there have been over 10,000 reported sightings of a bigfoot creature.

Since the 1970s, the height of bigfoot-mania, sightings have decreased dramatically.

So, is there a species of large hominid or ape that exists in North America?  Is there a kernel of truth to the centuries of stories?

Here is the problem. You can’t prove a negative. An absence of evidence doesn’t imply evidence of absence.  Someone “could” bring forward a bigfoot corpse tomorrow that could put the matter to rest.

However, as of today, despite centuries of stories and legends, there hasn’t been a single bit of physical evidence in support of a bigfoot creature.

There haven’t been any bones, hair, bodies, or fecal matter found from which we could take a DNA sample. Nothing.

If you have ever gone hiking in the woods, you can usually find evidence of animals, even if you don’t see them walking around. There is no such evidence that has been found for bigfoot.

Just given the amount of time and the odds, you’d think one might have been accidentally hit by a car or shot by a hunter, but that has never happened.

Ecologists note that if there were a hidden species of ape, there would need to be enough for a breeding population. They couldn’t remain that hidden for that long and still remain a viable species.

What could explain the thousands of sightings?

One common problem is that people misidentify bears at a distance. Bears can walk on their hind legs for short distances or do so to reach something. Many of them also have black fur, just like bigfoot is claimed to have.

Another possibility is that people have a tendency to find patterns in shapes. It is how you can see faces in clouds. This is known as Pareidolia. In the wood, you might see something of ambiguous shape, but your mind might see something vaguely like a person with legs, arms, and a head.

Another problem is that many of the sightings tended to peak precisely when bigfoot was ascending in popularity. People began seeing bigfoot at the same time everyone began talking about big foot.

Consider that as everyone began carrying around high-quality digital cameras on their smartphones, there hasn’t been an explosion of high-quality images of bigfoot.

The most damning evidence against the existence of bigfoot is the fact that so much of the evidence has been proven to be hoaxes.

Take, for example, the original 1958 footprints found by loggers. In 2002, one of the logging crew members, Ray Wallace, passed away. After his death, his family came forward to announce that their father had created the footprints with carved wooden feet.

They produced the wooden feet, which matched the original plaster casts of the footprints taken in 1958.

In 1998, a man by the name of  Bob Heironimus stepped forward and claimed to have been the man in the suit from the 1967 film. He said he originally didn’t come forward because he was supposed to get a third of the money from the film and later because he was concerned about being accused of fraud.

However, his story has been corroborated by several people. One who he told privately in 1969, and others who saw his gorilla suit.

The man who claims to have sold the suit, Philip Morris, ran a costume shop 1967 in North Carolina. He claims that it was a gorilla suit that he sold to Patterson via mail. He talked about selling the costume since the early 80s, but only to others in the profession, never publically.

Both he and Bob Heironimus claimed that football shoulder pads were worn inside the costume and that the arms were longer than the actual arms.

These aren’t the only hoaxes that have been exposed.

In 2005, a bigfoot researcher by the name of Tom Biscardi announced that he had a captured bigfoot and was going to sell access as a pay-per-view event. He never had a bigfoot.

In 2008, another bigfoot enthusiast by the name of Rick Dyer claimed he had found a bigfoot corpse. The story was covered by major news outlets, and when he delivered the frozen body….it was made out of rubber and fake hair.

In 2014, the same guy claimed that he had shot a bigfoot and had gotten DNA tests done on the body. No samples or test results were ever produced. He later admitted that this, too, was a hoax.

In 2012, one man in Montant was hit by a car and killed while he was dressed in a bigfoot suit trying to perpetrate a hoax.

I think you can see the problem with bigfoot.

There is no physical evidence and lots of evidence of hoaxes. Bigfoot sightings tend to correlate with mentions in popular media, and since more people have cameras with them all the time, there has been no corresponding increase in images.

I think the best way to understand the bigfoot phenomenon comes from the famed primatologist Jane Goodall. She has spent most of her life observing primates in the wild, and she was asked what she thought about bigfoot.

She said, “Well, I’m a romantic, so I always wanted them to exist….You know, why isn’t there a body? I can’t answer that, and maybe they don’t exist, but I want them to.”