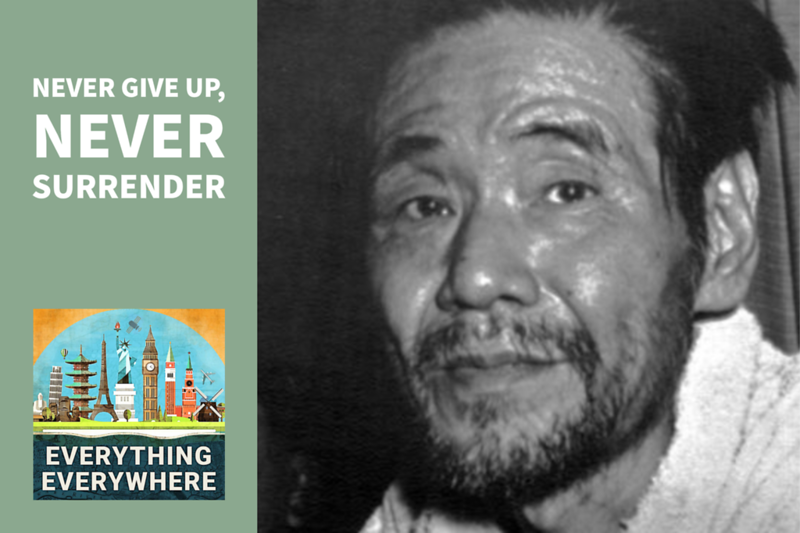 On September 2, 1945, on the deck of the battleship USS Missouri, the Japanese Empire formally and unconditionally surrendered.

With that, the second world war was over and everyone stopped fighting, went home, and lived happily ever after.

There were a surprisingly large number of holdouts who either didn’t know that Japan surrendered, or didn’t believe it.

Learn more about the Japanese soldiers who never surrendered on this episode of Everything Everywhere Daily.

The Japanese Empire, at its height, was pretty big.

In addition to major cities like Manila, Singapore, Hong Kong, and Jakarta this included a large number of small islands and remote areas.

There were thousands of Japanese soldiers who were stationed in these remote outposts.

As the war wore on, the Americans didn’t bother to try and conquer every single outpost and capture every single soldier. They would often bypass islands knowing if they could capture strategic islands, the Japanese they skipped couldn’t be supplied or evacuated.

As the war dragged on, by August 1945, the Americans were on the doorstep of Mainland Japan. The Soviets had entered the war, the British, having finished up against Germany were on the way, as were potentially hundreds of thousands of troops from Europe.

With all of this and the detonation of two atomic bombs, the Japanese Emperor Hirohito decided to surrender unconditionally. On August 15, he addressed the Japanese people by radio, for the first time in history.

It was the first time anyone outside of the Emperor’s inner circle had ever heard his voice.

When the final surrender document was signed in September 1945, everyone assumed that that was it. The Japanese system was very hierarchical and when the Emperor said it was over, then it was over.

For the most part, it was over. 99.9% of all Japanese soldiers laid down their weapons and were done. There was certainly a great deal of disappointment among the military and the populace in general. After all, surrendering to a foreign enemy and having them occupy their country is something no one really wants.

The problem was many of the remote outposts had been cut off from contact with the rest of the Japanese military. In several cases, soldiers were instructed to go into the jungle to survive and harass the enemy, and not to stop unless explicitly order to stop by their commanding officers.

For some, they just didn’t know the war was over. For others, they had heard the war was over, but they simply didn’t believe it. Yet others had bought into the bushido spirit of never surrendering, and simply refused to surrender.

The majority of holdouts didn’t last very long. In the initial weeks and months after the surrender, most of those who didn’t surrender came in from the cold when they finally realized that the war was in fact over.

Captain Sakae ?ba lead a group of 46 soldiers and about 200 civilians on the island of Saipan after the battle of Saipan for 16 months before surrendering on November 27, 1945.

Lieutenant Ei Yamaguchi led 33 men on the island of Peleliu, constantly attacking American soldiers on the island until a Japanese admiral came to the island to tell them that the war was over. They finally surrendered in April 1947.

On January 6, 1949, Yamakage Kufuku and Matsudo Linsoki, three and a half years after the end of the war, finally turned themselves in on the island of Iwo Jima.

However, a bunch of soldiers who stubbornly spent a few months or even years in a jungle isn’t what this episode is about.

This is about the really really hardcore holdouts.

For years, Japanese soldiers kept coming out of the jungle and turning themselves in….and when I say years, I mean years.

In June 1951, almost six years after the end of the war and seven years since the Americans invaded, a Japanese petty officer surrendered on the island of Anatahan in the Marianas Islands.  He indicated that there were still 18 men on the island who thought that the war was still going on.

The men had lived on fish, coconuts, and wild lizards for years. In 1945, an American bomber crashed on the island and they were able to salvage enough from the plane to create shelter, clothing, and other tools.

Eventually, a ship was sent to the island and all the men gave themselves up after a surrender ceremony on the beach.

This incident was the basis of the 1953 movie Anatahan.

Murata Susumu came out of hiding on the island of Tinian later in 1953.

Sh?ichi Shimada was killed fighting Filipino soldiers in May 1954.

In November 1955, Noboru Kinoshita was captured in the forests of the island of Luzon in the Philippines. He later committed suicide rather than deal with the indignity of capture.

In 1956, nine soldiers were found and surrendered on the Indonesian island of Morotai.

Also that year, four men came out of hiding on the island of Mindoro in the Philippines.

In 1960, two soldiers, Private Bunz? Minagawa and Sergeant Masashi It?, came out of hiding on the isle of Guam.

These guys were living in survival conditions for over 15 years….and we haven’t even gotten to the really interesting stuff yet.

On January 24, 1972, 27 years after the end of the war, perhaps the best-known example of a Japanese holdout came out of hiding in Guam, Shoichi Yokoi.

Yokoi was originally one of 10 men which went into hiding in Guam. By 1964, there were only three left, and two of the three were killed in a flood.

Yokoi survived by hunting at night when no one could see him. He made his own clothes and lived in a cave.

Eventually, he was caught by two fishermen fishing in a river. He thought they were going to attack him, so he attacked first, and the two men subdued him.

He was shocked that they gave him warm food and eventually went with him to the authorities on the island.

It turns out he knew the war had been over since 1952, but he thought that a Japanese soldier should never surrender.

He ended up returning to Japan to a hero’s welcome. He became a regular on Japanese television and was the subject of a documentary film.

He made a trip to the imperial palace and said for the cameras, “Your Majesties, I have returned home … I deeply regret that I could not serve you well. The world has certainly changed, but my determination to serve you will never change.”

However, Yokoi wasn’t the last Japanese soldier who was still in hiding.

Later that year Kinshichi Kozuka was killed in a shootout with Filipino police.

Two years later in March 1974, Hiroo Onoda, who was actually in hiding with Kozuka, surrendered. However, he refused to surrender until his commanding officer from the war flew to the Philippines to formally relieve him of duty.

The very last Japanese soldier, Teruo Nakamura, was found by the Indonesian airforce on December 18, 1974. 29 years and 3 months after the surrender of the Japanese. He actually didn’t come forward to surrender voluntarily, he was found by a search plane and then arrested by soldiers.

Nakamura was Taiwanese and not Japanese and didn’t even speak Japanese or Chinese. When he was sent home, he went directly to Taiwan instead of Japan and never received the hero’s reception that other holdouts did.

None of the last holdouts came out of hiding voluntarily. They were all found or captured somehow.

This then raises the very reasonable question, were there other holdouts who were never discovered? Could there have been Japanese soldiers who never surrendered and lived the rest of their lives in hiding?

The answer is that there probably were.

A Japanese newspaper reported that Captain Fumio Nakahara was still holding out as late as 1980. He was reportedly hiding near Mount Halcon on the island of Mindoro in the Philippines.

A search team was sent there and they supposedly found his hut, but they did find him or any evidence that he was alive.

There were sporadic rumors at late as the early 90s of Japanese holdouts in the Philippines and the Solomon Islands, but no substantial evidence was ever found.

The phenomenon of soldiers from a war going decades without surrendering was unique to the Japanese army in World War II. If you remember back to the episode I did on the last Germans to surrender, they were just a forgotten team of weather observers on a remote island, and they only were there a few months.

I can’t think of any other war where so many soldiers refused to surrender for so long.

In a way, you sort of have to respect them. They said they would never surrender….and they didn’t. For years they were willing to live in primitive survival conditions in order to keep the oath that they took, even though their cause was ultimately a failure.

I have some more boostagrams today. I’ve gotten a lot of them this past week, and I’ll be reading more of them in future episodes.

Today’s come from Dave Jones. He sent 2112 sats for the episode on Horses in North America and wrote “An episode on Kaliningrad Oblast would be great if you get a chance one day.”

Kaliningrad has an interesting history. Today it is an exclave of Russia, but it used to a part of Germany and it was called Koenigsberg.

I have put it on my mega list of future episodes.

Dave also sent another 2112 sat boost for the episode on tornadoes. He writes, We’ve had multiple outbreaks and single F5 tornados in Alabama. The most destructive one I ever witnessed was in 2011 near me in a place called Shoal Creek. An entire nursing home was literally ripped out of the ground. Even the concrete footers were gone.

An F5 is a very very nasty thing if you are ever caught up in one. Thankfully they are rather rare. If you look at the list of F5 tornadoes in history, they usually only occur several years apart.

However, in 2011 there were six, three of which were in Alabama. There hasn’t been a tornado with an official F5 rating since 2013.  The distribution