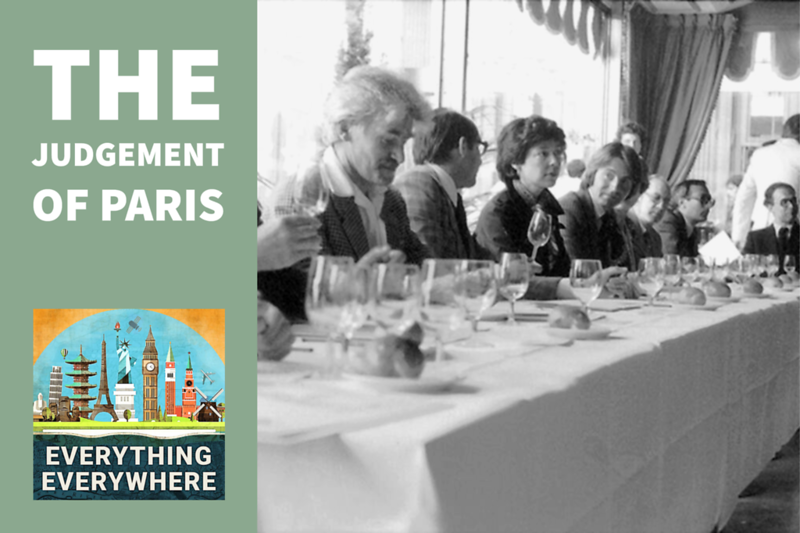 Before 1976, the California wine industry wasn’t on anyone’s radar. Most Americans didn’t even know that wine was produced in California.

Everyone in the knew, without any doubt, that the greatest wines in the world were all produced in France. In particular, from regions such as Bordeaux and Burgundy.

However, in just one day, the wine world’s attitudes towards French and California wines were completely and irrevocably altered.

Learn more about the Judgement of Paris and how, in a single day, the world took California wines seriously on this episode of Everything Everywhere Daily.

I’ve mentioned the history of wine several times in previous episodes. Basically, it was most probably invented somewhere along the coast of the eastern Mediterranean Sea and then spread throughout the entire Mediterranean basin.

The region around the Mediterranean was well suited to grape production, so wine was a natural product to create.

Wine thousands of years ago wasn’t quite the same as what is consumed today.  Much of it was probably pretty bad by modern standards, which was why the Romans would usually water it down and add flavoring to it in the form of honey or spices.

For centuries, wine was still a very utilitarian product. Certainly, some wines were better than others, but for the most part, winemakers were making a beverage to be consumed, not something which was considered an art form.

Over time, innovations in bottles and corks, as well as a better scientific understanding of the fermentation process and a better biological understanding of how grapes grew, led to improvements in the quality of wine.

As wine quality improved and bottles were created that could be stored in a cellar almost indefinitely, a high-end culture began to develop around wine.

There was one fairly unanimous opinion that most wine enthusiasts had going well into the 20th century: The world’s greatest wines all came from France.

This wasn’t really even a controversial statement so much as it was just a statement of fact. It would be like saying the world’s best sushi can be found in Japan or that the greatest NFL players come from the United States.

While French wine was considered the best, wine was still produced in many other places, including what was collectively known as the “new world.”

In the world of wine, the “new world” is basically everywhere outside of Europe or the Middle East where grape cultivation wasn’t native. This includes everything, including the United States, Canada, Argentina, Chile, New Zealand, Australia, and South Africa.

These countries weren’t taken seriously by wine enthusiasts, and to be honest, that reputation was probably well-earned for a long time.

The wine region which is the focus of this episode is Napa Valley in California.

In the early 20th century, there was a phylloxera pestilence: small aphid-like bugs that destroyed the grape harvest.

The big thing which really killed the wine industry, of course, was prohibition, which literally made the production of wine illegal.

They could still grow grapes and make grape juice, but it wasn’t the same thing.

The Napa Vally wine industry didn’t really come back to pre-prohibition levels until the 1960s.

Starting in the 1960s, significant amounts of money began being invested in Napa wine production. Producers such as Robert Mondavi created large wineries, increasing the quantity of wine produced, and smaller producers increased the quality of wine in the region.

In fact, they were starting to make some very good wines.

By the mid-1970s, the people in Napa Valley knew they were making world-class wine, but it was hard to get the attention of the rest of the world.

With every bottle of wine comes the history and reputation of the country, region, and even vineyard where it was produced. Once a reputation is established, it is hard to break.

By the same token, developing a reputation is hard to do.

With this background, the story really begins and it begins with a British wine merchant who lived in Paris by the name of Stephen Spurrier.

Spurrier moved to Paris in 1970 and purchased a small wine store. He quickly developed a reputation for being extremely knowledgeable about wine, and his reputation in wine circles grew rapidly. He opened up a wine school next to his wine shop as well.

Spurrier would often rebel against the French wine scene by often providing tastings of wines from outside of France.

In 1975, Patricia Gastaud-Gallagher, an American friend of Spurrier, visited Napa and was impressed with the quality of the wines being produced. She recommended to Spurrier that a tasting of American wines might be something to consider, especially if they did it in 1976 during the American bicentennial.

In early May 1976, Spurrier flew to San Francisco to take a tour of small boutique vineyards in the region. He sampled a bunch of wines and purchase bottles that he thought would be good enough to put in the wine tasting he had scheduled for later that month.

The event he had been planning for six months was scheduled to take place on May 24th at the Intercontinental Hotel.

There were six American wines and four French wines in each competition.

The event was not promoted as USA vs. France because, given the climate at the time, such a competition wouldn’t be considered a fair fight.

Everyone assumed that if an American wine could be placed in the top three in the tasting, it would be a respectable showing for American wines.

There were nine judges in the competition, all of which were French. They included some of the most respected wine journalists, winemakers, sommeliers, and restaurantours in France.

Most importantly, the competition was to be a blind tasting. Each judge would rank each wine on a 20-point scale. No one would know where the wines came from or who made them.

The decision to make it a blind tasting was a last-minute decision. At the time, most wine competitions were not blind tastings, so judges usually knew what was supposed to be best, even before they tasted it.

Only one journalist, George Taber, who wrote for Time Magazine, bothered to attend.

When the tasting began, Taber was given a list of the wines being tasted, so he could observe what the judges were tasting, even though they didn’t know.

He realized quickly that something was amiss. Some judges were making snide comments about how certain wines had to have been California wines because they had no aroma, yet Taber knew they weren’t actually California wines they talking about.

The results were announced when all the wines were tasted and the judges’ scorecards were tallied.

The results shocked everyone.

The Americans did better than a respectable top 3 finish.

That, however, was only half of it.

The 1973 Chardonnay from Chateau Montelena took first place in the white category by an even wider margin. In fact, three of the top four white wines were American.

After the results were announced, several of the judges were visibly upset. Odette Khan, the editor of France’s top wine magazine, wanted her scorecard back so her reputation wouldn’t be tarnished. She criticized the event for years.

Word of the results spread quickly around the wine world. Taber’s article was published in Time Magazine, which introduced many Americans to the fact that there even was such a thing as an American wine industry.

It wasn’t just a victory for American wines, however. By dispelling the myth of French wine superiority, it opened the door to accepting wines from all over the world.

Some French wine apologists came up with excuses like that French wines would age better over time, so another tasting was held with the exact same wines two years later. This time, it was held in San Francisco.

The results were a little different but even more lopsided for the Americans. This time, American wines took the top three spots in both red and white.

In 1986, on the 10-year anniversary of the competition, another duplicate tasting was held again, this time by the French Culinary Institute, with the exact same wines and vintages.

It only tasted the red wines because, at this point, it was believed the whites had passed their peak. Once again, the American wines took the top two spots.

That same year Wine Spectator Magazine did their own replication of the contest, again with the exact same wines. This time, the American wines took the top 5 spots.

In 2006, Steven Spurrier organized a 30th-anniversary replication of the event, this time with some of the original judges from 1976. In this event, American wines took the top 5 spots.

The Judgement of Paris was dramatized in the 2008 film Bottle Shock, with Alan Rickman playing Steve Spurrier.

The Smithsonian Institution has on permanent display bottles of the ‘73 Chateau Montelena and the ‘73 Stag’s Leap Cellars that both took first place.

If you go into a shop and find a wide selection of wines from around the world, it is due, in no small part, to events that took place in a Paris hotel ballroom almost 45 years ago.

Today’s review comes from listener LadyLuv69 over at Apple Podcasts in the United States. They write,

My husband sent me this podcast one day, and now we are going back through every episode that he’s ever done. Who needs an encyclopedia when you have this podcast?

Thanks, LadyLuv! The real reason why you don’t need an encyclopedia probably has more to do with the global network of interconnected computers that can access all the world’s information at almost the speed of light….but I still take the compliment in the spirit with which it was given.