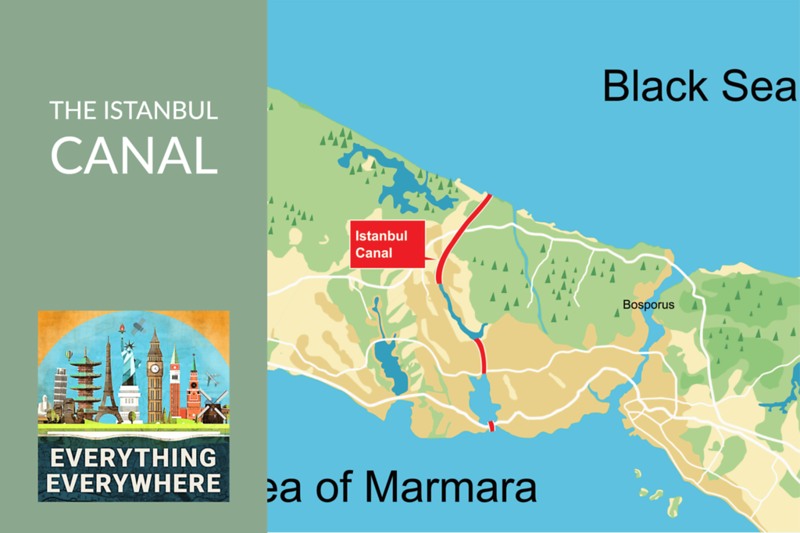 For centuries, humans have built canals to facilitate the transportation of people and goods.

Usually, they are built to dramatically save time, like how the Panama and Suez canals can help avoid a trip around an entire continent.

However, there is currently a canal being built that is designed to replicate a natural feature that already exists.

Learn more about the Istanbul Canal and why it is being built, on this episode of Everything Everywhere Daily.

As I noted in the introduction, canals have been built for centuries, and they are almost always built to reduce time or simplify transportation. Unless you need locks to raise or lower boats, they are pretty simple if sometimes larger projects.

What all these canals have in common is that they allowed for routes that didn’t exist before.

Technically, it connects the Black Sea and the Sea of Marmara, which is a small body of water between the Bosporus and the Dardanelles.

This means that every country on the Black Sea (Bulgaria, Romania, Ukraine, Georgia, and Russia) all have to sail through Turkish territorial waters to get anywhere else in the world.

So given that there is a natural connection between the Black Sea and the Mediterranean, it would seem that the problem has been solved. Nature has created its own canal.

However, Turkey has begun construction of a canal to connect the Black Sea and the Sea of Marmara, the exact same route as the Bosporus. In fact, the canal is being constructed only about 30 kilometers away from the Bosporus.

The canal, dubbed the Istanbul Canal, will be a total of 45 kilometers or 28 miles long, it will vary in width between 1 kilometer and 250 meters, and it will have a depth of about 21 meters or 69 feet.

So, if there is already a water channel that does the exact same thing, not far away, why is this canal being built?  This is totally unlike almost every other canal in the world which was created to do something that doesn’t exist in nature.

Believe it or not, there are actually some pretty good reasons why a canal would be built that does the exact same thing.

The idea of a canal that runs parallel to the Bosporus actually goes back a long time.

The idea was first hatched by Suleiman the Magnificent in the 16th century. He actually had his head engineer create plans for the canal that was never actualized.

No fewer than four other Ottoman Sultans brought up the idea of creating the canal, but nothing ever came of it.

In modern times, the idea was resurrected in the 80s and 90s, but again, the size of the project was overwhelming and nothing happened.

While nothing was being done, traffic in the Bosporus kept increasing. As global trade boomed, more and more ships kept going through the strait.

Currently, it is not uncommon for ships to have to wait up to 14 hours on either end to enter the Bosporus. Moreover, the wait is getting longer as the number of ships is increasing.

So, a new canal would certainly help facilitate shipping and reduce wait times.

However, what incentive does Turkey really have to do this? Most of the ships don’t originate in Turkey and they aren’t shipping to Turkey. They just happen to be the country that the waterway happens to pass through.

The real reason why the canal is being built has to do with international law.

In particular, the 1936 Montreux Convention.

The Montreux Convention was signed at the Montreux Palace in Switzerland and it dealt with the question of the Turkish Straits.

The right of navigation in the straights of the Bosporus and the Dardanelles has been an issue for centuries. It was a strategic chokepoint and whoever controlled it could control the trade for the entire region.

It was the very reason why the location was selected for Constantinople, and ultimately why the Ottoman Empire chose to use it as their capital as well.

The Bosporus was so important that it that for centuries Russia coveted control of the straits because, without control of it, none of their warm-water ports on the Black Sea mattered.

The Montreux Convention established the rules for international travel through the straits.

One of the principles of the Montreux Convention is that it allows complete freedom of passage for all commercial shipping during peacetime.

Article 2 states, “In time of peace, merchant vessels shall enjoy complete freedom of passage and navigation in the Straits, by day and by night, under any flag with any kind of cargo”.

So, for the countries on the Black Sea, it put their minds at ease that they couldn’t have their shipping closed down.

However, the catch is that Turkey makes absolutely nothing on any of this shipping. Unlike Egypt or Panama which makes money off of their canals, Turkey can’t make a dime off of their natural canal.

So when I asked before what incentive did Turkey have to alleviate the wait times in the Bosporus, it was a very serious question.

The other part of the Montreaux Convention has to do with military vessels.

Furthermore, no military vessel can be more than 10,000 tons.

The Soviets used to mess with this during the cold war by parking a ship in the strait, preventing other ships from entering due to the tonnage restrictions.

Turkey is a member of NATO, and that means that many NATO ships can’t enter the Bosporus and into the Black Sea, even if Turkey wanted them to.

There are further restrictions on submarines and other military vessels, and on top of everything, Turkey does retain the right to block ships if they happen to be at war with a country.

Long story short, the Montreux Convention places restrictions on what Turkey can and cannot do with the Bosporus.

So, if Turkey were to build a canal that connected the Black Sea and the Marmara Sea, unlike the Bosporus, they could have complete control over the route.

Moreover, just like with the Panama and Suez Canals, they can make money off of ships that transit through it.

Not only that, but they could let whatever military vessel they want to pass through without restriction.

That is why the Istanbul Canal is being built. It provides an alternative route in and out of the Black Sea that doesn’t have any of the restrictions of the Montreux Convention.

What this will in effect do, it turn the European side of Istanbul into an island as it will become totally surrounded by water.

Moreover, because the Bosporus is so narrow and passes right through the middle of Istanbul, by creating an alternative route, ships that are carrying dangerous materials can take the alternate route which would be much safer for the city.

If you are wondering just how dangerous a ship can be, I’ll just refer you to the 2020 explosion of a ship carrying fertilizer in Beruit.

The Istanbul Canal sort of began construction in June of 2021 with the start of a bridge that will supposedly cross the canal. However, not much work beyond that has been done yet.

The project is estimated to cost between $10 to $15 billion US dollars, and it will include much more than just the canal. It will also include a port, artificial islands, bridges, and other infrastructure projects.

Official government projections are that it will bring in $8 billion per year in revenue.

However, there is a lot of controversy surrounding the project. One concern is that the route of the canal would eliminate the largest sources of freshwater for Istanbul.

Another is that the revenue projections are unrealistic. If this were the only route into and out of the Black Sea, they might make sense, but given that there is a free alternative just a few kilometers away, saving 14 hours just might not be worth it for most shipping companies.

Also, many people are concerned about the militarization of the Black Sea if more and larger military vessels are allowed to enter.

The biggest problem for the project at this point is simply financing.

From a strictly engineering perspective, however, it is a fascinating project. If completed, it will be one of the world’s biggest engineering projects of the decade and one of the only canals in the world that replicates something that already exists.

I have some more Boostagrams to share with you. All of today’s Boostagrams come from listener Dave Jones.

He sent 2112 sats from the episode on The History of the Tank. He wrote: Such a great episode. Especially the part about tanks now being phased out because of cheap antitank weapons. It makes a lot of sense now why Russia has lost so many tanks in Ukraine. I’m sure they have lots of NATO supplied antitank munitions.

That, I believe is definitely the case. As I mentioned in the episode, there is always an ebb and flow between offense and defense. I think we are now seeing cheap electronics swing things back towards defense.

I was actually thinking about this today, how many of the “cheap” anti-tank weapons which run into the tens of thousands of dollars could probably be produced for 1/10th that amount if they weren’t manufactured by military contractors.

He also sent another 2112 sat boost from the episode on Stephanie St Claire. He wrote” I wonder why a large cash of money is referred to as a “fortune “. ?

That one is easy, and I can tell you off the top of my head (although I did also check to verify if I was correct). It comes from the Latin word “fortuna” which means luck or chance. If someone was “fortunate” they would have a “fortune”.