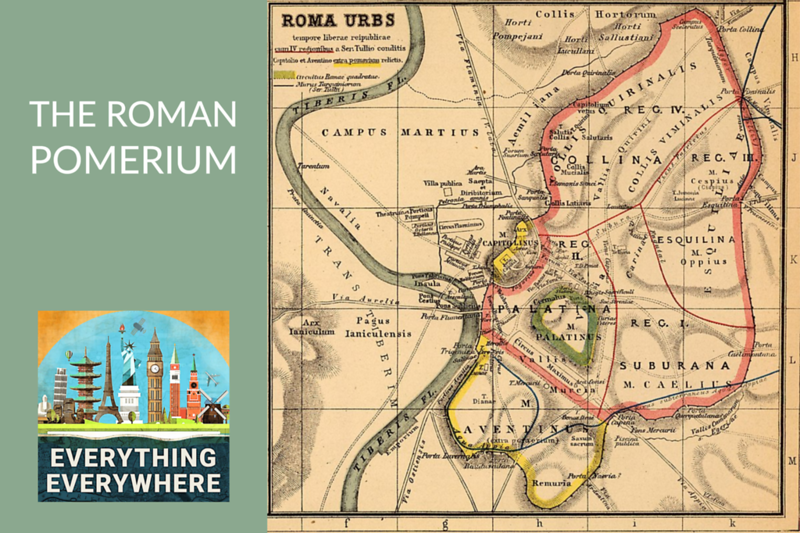 Ancient Rome had an enormous number of customs and traditions. Some of them have been passed down to us in the names of our months, or the letters in the Latin alphabet.

However, they also had a lot of very customs which to us seem very strange.

One of the strangest, and most powerful to the Romans, were the traditions surrounding the Roman city limits, aka the pomerium.

Learn more about the Roman pomerium, and how seriously the Romans took it, on this episode of Everything Everywhere Daily.

To understand what the Roman pomerium was and why it was so important, we have to go back to the very founding of the city of Rome….or at least the legends of its founding.

When he founded the city, he took a plow and with it created the boundaries of the city. That line he plowed which defined the city limits, became the pomerium. The date that he plowed this trench, April 21, is still celebrated today as the founding of Rome.

The word pomerium is a contraction of the Latin words post moerium, which means beyond the walls.

Supposedly, this was an ancient Etruscan tradition and it would have been something that many cities and towns in the Italian peninsula might have had.

The pomerium, however, wasn’t really the city limits of Rome. It served only as the legal and religious boundary of Rome.

Ancient Rome was an enormous city. You often hear of people talking about the seven hills of Rome. In average everyday use, this sprawling metropolis was Rome, or at least the area inside the city walls.

However, the pomerium was much smaller. It didn’t encompass all seven hills as the Aventine hill, for example, was outside of the pomerium.

So, the pomerium served more as a legal and religious boundary, rather than a practical boundary of an urban area.

So, why was this line so special?

When Romulus took his plow to create the pomerium he didn’t create a continuous trench. At several points he picked up the plow, only to start the trench again a few meters later. These points became the gates of the city.

Because the pomerium was the legal boundaries of the city, there was a rule that one could not cross the pomerium. For most of the pomerium, there wasn’t a wall. There were just stones that delineated where it was located.

You had to pass through the gates, and if you didn’t the penalty was death. Crossing the pomerium was considered a symbolic invasion of the city.

This was taken very very seriously by everyone, as I’ll get to in a moment.

There were a host of rules for what could and couldn’t be done inside the pomerium.

For starters, no one was allowed to be buried inside of the pomerium. This is why the Vatican was originally outside of the city limits of Rome. It was a cemetery.

The tombs of Augustus and Hadrian, which you can still visit today, were also outside of the pomerium, as are many catacombs and monuments erected along the Apian Way.

The assassination of Julius Caesar took place outside of the pomerium, so the senators who killed him couldn’t be charged with sacrilege for having weapons.

Likewise, generals couldn’t enter the pomerium lest they lose their position. In the event that a special session of the senate was needed which required the attendance of generals, tents would be erected outside the city on the fields of Mars.

This restriction on the military inside of the city extended to the magistrates themselves. Certain elected positions such as consul, proconsul, aediles, and quaestors, were allowed to have personal bodyguards called lictors. The lictors would carry a long bundle of wooden rods known as a fasces which were a symbol of their authority.  How many lictors you had depended on your position.

By the way, the word fasces is the basis for the word fascist, and there are many examples of fasces in architecture in many government buildings in countries.

There was one exception to the rule of weapons and soldiers being allowed inside the pomerium. That was during a Roman Triumph.

If a Roman general was awarded a triumph, he and his men were not allowed inside the pomerium until the start of the triumph. The general and the soldiers then would enter the gates of the pomerium and would be allowed to proceed through the city in a procession.

However, even this still had its limits.

There was one famous story about the triumph given to General Pompeius Magnus. He had several elephants which were to be a part of his triumph, but he couldn’t get them through the gate to enter the city.

The gates also were a major problem when it came to annual elections. The elections would be held each year on the plains of Mars outside of the pomerium. Everyone in the city who wanted to vote had to go outside the pomerium, and they had to do so through the gates.

This would make a walk which would otherwise be reasonably short, take hours as there were massive crowds of people trying to get through the gates both leaving and entering the pomerium.

Wealthy Romans could get around this by staying in their villas outside of the city, but everyone else had to either put up with the long wait times or not bother to vote.

Perhaps the biggest rule regarding the pomerium applied to proconsuls and regional governors.

This was coupled with the fact that if you wanted to run for an office, you had to be physically present inside the pomerium to declare your candidacy.

This fact was pretty much the entire reason behind the Roman civil war with Julius Caesar.

He had legal immunity as proconsul of Gaul so long as he was outside of the pomerium. However, his position was expiring and he wanted to run for consul again so he could continue having legal immunity. However, to be consul, he had to cross the pomerium and lose his immunity, which made him subject to legal action.

The Senate wouldn’t budge and make an exception, so the end result was war.

Despite the importance which was given to the pomerium, the boundary was actually expanded several times in history.

The first expansion occurred during the rule of the Dictator Sulla in the year 80BC. It probably took someone with dictatorial powers to redraw the pomerium because the tradition behind it was so strong, it would have been difficult to get the senate to do it.

Likewise, Augustus expanded the pomerium three times in 27, 18, and 8 B.C.

The emperor Claudius expanded and included the Aventine Hill in the year 49. He created a series of white marker stones, known as a cippius, which delineated the location of the pomerium.

These stone cippi which were set up under Claudius are still being found today.

The most recent discovery of a Claudian cippius was made in 2021. It is the 10th such stone discovered.

The closest thing we have today to a pomerium might be national borders, some of which are very closely watched. If you should cross a national border, you are under a completely different set of rules. Just like in Rome, there can be major consequences to crossing such a line.

The traditions surrounding the Roman pomerium might seem very odd to us, but they did serve a purpose at the time. It was a very clear diving line for where responsibilities and powers began and ended.

Today’s review comes from listener Raul Rostan from Apple Podcasts in the United States. He writes (in Italian)

Wow, thanks Raul. In the words of the great fake version of Nicholas Cage…..that’s high praise.