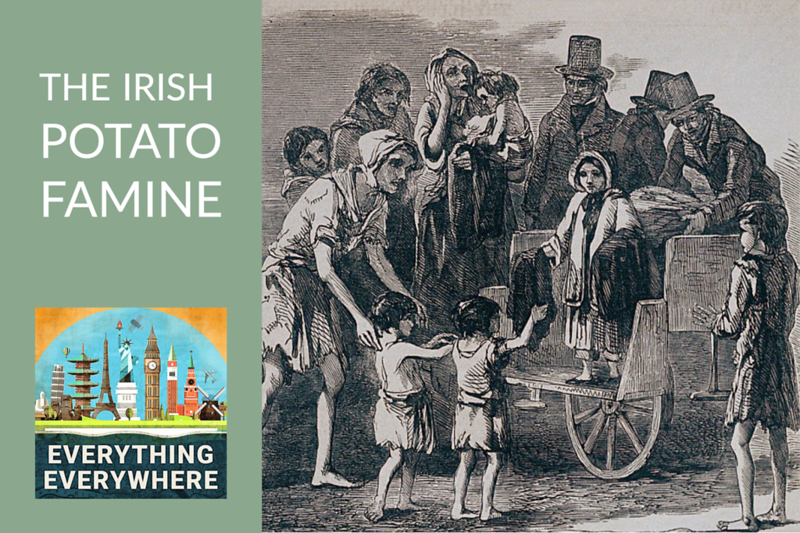 In 1845, farmers around Europe suffered from a blight that devastated the potato crop.

This lasted for several years, but nowhere was it more pronounced than it was on the island of Ireland, where it resulted in death and mass migration.

The effects of this potato blight can still be witnessed in the world today.

Learn more about the Great Irish Famine, also known as the Irish Potato Famine, on this episode of Everything Everywhere Daily.

To understand how and why the Irish Potato Famine occurred, there are a few things we need to understand first.

The most important was the economic and political situation in Ireland at the time.

Despite the fact that Ireland was supposedly fully integrated into the United Kingdom, it was in reality, a colony. Having been conquered by England, almost all major landowners in Ireland were English or Anglo-Irish.

In theory, they had representation in parliament in both the House of Commons and the House of Lords, but almost all of those people were also wealthy English.

Many of the landowners in Ireland also didn’t even live there. They had no connection to the land or the people who worked on the land. It was simply an investment. Almost all of the land was confiscated by force by aristocratic English starting back in the 17th century.

Irish Catholics were, for all practical purposes, second-class citizens in their own country.

The way the absentee landowners would make money was by renting their land out to peasants who would grow crops for export. This was all conducted via a system known as the “middleman system.” Agents would be hired who lived in Ireland and collected the rents.

These agents held great power and could and did abuse this power on a regular basis. Their bosses weren’t there and quite frankly didn’t really care, so long as their rents were paid. Almost all of the money made in Ireland was sent out of the country.

This system resulted in Ireland being the poorest country in Europe in the mid-19th century.

The parliament conducted many inquiries into the problems in Ireland. One such report, which the Earl of Devon oversaw, reported:

It would be impossible adequately to describe the privations which they [the Irish laborer and his family] habitually and silently endure … in many districts their only food is the potato, their only beverage water … their cabins are seldom a protection against the weather … a bed or a blanket is a rare luxury … and nearly in all their pig and a manure heap constitute their only property.

On top of this, Ireland also had the highest population density of any country in Europe at the time, and it had a population of about 8,750,000 people.

I should also note that at this time, much of the native population in Ireland didn’t even speak English. They spoke Gaelic.

A poor, large population resulted in high rents for very small plots of land, which were the only things that peasants had to grow their own food.

This then brings me to the subject of the potato.

If you remember back, I did an entire episode on potatoes. Potatoes were actually a miracle crop for Europe once they opened up to it. Potatoes provided far more calories and nutrients than any other crop which could be grown. If the amount of land you had was limited, then the smart option was to grow potatoes.

For poor Irish Catholics, potatoes were the foundation of their diet. They would literally eat potatoes in almost every form, for every meal. They might occasionally have some butter and onions with them, but that was about it.

Not only did people eat potatoes, but so did the livestock.

It turns out that Ireland was also very well suited for potato production. They grew well, and Ireland was one of the first countries in Europe to adopt the potato.

The potato was really the food that made life in Ireland even possible in the mid-19th century.

Then something happened around 1842 to 1844. In the Toluca Valley in Mexico, a pathogen began to spread in potatoes. It was a fungus that could wipe out entire crops and make the products inedible.

The blight spread north into the United States, but the impact wasn’t that severe because the Americans weren’t reliant on potatoes. They had a wide variety of foods that were grown, and without potatoes, they had plenty of substitutes.

From the US, the blight spread by ship to Europe.

Here I should note that the potato blight didn’t only occur in Ireland. The Irish Potato Famine was just a subset of what was known as the European Potato Failure, which affected most of Europe where potatoes were grown.

In fact, many countries suffered worse potato harvests than Ireland did. What magnified the problems in Ireland were poverty, land ownership, and the overreliance on a single crop.

When the blight arrived in Ireland in late 1845, no one was sure what caused it. It was a bad year for the weather. The worst that anyone of any age could remember.  It was first reported on the Isle of Wight in mid-August, and it was spreading through Ireland like wildfire in September.

It became clear that Ireland was going to have big problems. Estimates are that the potato crop in 1845 was down by ? to ½.

A failed crop is bad, but if a single year’s crop goes bad, it is usually something that you can survive. This happened before in Ireland, and it wasn’t an unfamiliar occurrence in all agricultural societies.

What made this so bad was that the blight didn’t go away.

What was just widespread hardship had turned into an actual famine.

The government’s reaction to this was totally out of the hands of the Irish, who really didn’t control anything.

All around Europe, governments did two things immediately. First, they removed tariffs on food imports so more food could come into the country from unaffected areas. Second, they usually banned food exports, so more food was available to people in the country.

This is exactly what Ireland did back in 1782-83 when Ireland faced a food shortage.

The British parliament did the first. They removed what was known as the Corn Laws, which were high tariffs on grain. However, they never did anything about exports.

During the entire time of the famine, Ireland was exporting food out of the country. Food that was owned by English aristocrats who didn’t live in Ireland.

The person who the British sent to Ireland to head up relief efforts was Sir Charles Trevelyan. The problem was, Trevelyan pretty much hated the Irish.

He didn’t view the famine as a problem of food or even land ownership. He viewed the famine as the result of a moral failure of the Irish. He thought that this was the judgment of God on the Catholics and said, “The real evil with which we have to contend is not the physical evil of the Famine, but the moral evil of the selfish, perverse and turbulent character of the [Irish] people”.

1847 was probably the worst year of the famine. Parliament passed the Poor Law Amendment Act, which modified the 1838 Irish Poor Law.

This law mandated that anyone who owned at least a ¼ acre of land was ineligible for any aid or assistance. That meant that someone who had sold off everything to pay their rent now would receive nothing until the land reverted back to the landowner.

This resulted in massive evictions, which began and 1847 but increased all the way through 1850.

Also, because of the hunger deaths which began in 1846, there were few seed potatoes available for 1847, which just made matters worse. An estimated 50,000 families were evicted from their land between 1847 and 1850.

The total number of deaths from 1845 to 1851 is unknown, but the estimates are around usually given around 1 million and as high as 1.5 million. This includes deaths from starvation and from disease.

In addition to the deaths, the famine also resulted in a massive wave of immigration out of Ireland. There was a peak of 250,000 people who immigrated to the United States in just 1847, with another 100,000 who left for Canada.

The immigrants brought diseases with them, which ravaged the ships as they crossed the Atlantic, and they were responsible for a large outbreak of typhus in the United States in 1847.

Many immigrants were sent away by their landlords in exchange for their land.

Most of the immigrants to North America were young people, predominantly from western counties in Ireland.

Many people also migrated to England. Liverpool became a quarter Irish by 1851.

Aid and donations were sent to Ireland from around the world. The most interesting donation came from the Choctaw Nation of Oklahoma, who had been forced to live there via the Trail of Tears just a few years earlier. They raised $170 dollars, which was a fair amount of money in 1847, and a whole lot of money for a mid-19th-century tribe that had lost its land.

The Great Famine set off a spark that resulted in massive changes to Ireland. It really could be said to have kicked off the Irish nationalist movement, which eventually resulted in Irish independence. The biggest example of this was the Young Ireland Rebellion of 1848.

The immigration from Ireland never stopped once the famine was over. Ireland saw a decrease in population every decade until the early 1960s when the population bottomed out at around 2.1 million people.

Even today, in the 21st century, the population of Ireland, both Northern Ireland and the Republic of Ireland, is less than what it was in 1841.

As for the blight itself, it was eventually identified as the fungus Phytophthora infestans, which still can infect potato and tomato crops today. In fact, there was another potato blight that occurred in Ireland in 1879, but it did not result in mass deaths.

So, why did crop failures before and after the Great Famine not result in the same things? Why did the same potato blight in other European countries not result in famine when it did in Ireland?

The overwhelming historical consensus is that it was due to the British response and their rule over Ireland.

The land confiscation, absentee landlords, the middleman system, the evictions, and failure to stop food exports all contributed to turning a bad situation into a disaster.

John Mitchel, one of the leaders of the Young Ireland Rebellion in 1848, wrote one of the first academic accounts of the famine in 1860. He wrote:

The Almighty, indeed, sent the potato blight, but the English created the famine.

Today there are many commemorations of the Great Irish Famine.

There is an unofficial National Famine Commemoration Day in Ireland which is celebrated on the third Sunday in May.

In 2015, a sculpture titled Kindred Sprits was installed in County Cork which honors the donation of the Choctaw People.

There is an Irish Hunger Memorial located near Battery Park in New York, and the National Famine Museum is located in Strokestown Park, County Roscommon, Ireland.

The Great Famine remains probably the singular most influential event in the history of modern Ireland. It has directly or indirectly shaped the history and demographics of the island of Ireland for over 175 years.

What an incredible podcast! From the Black Sox scandal to the history of the chicken. What more could you ask for???

Thanks, P1BK! I know what more you could ask for……more episodes.