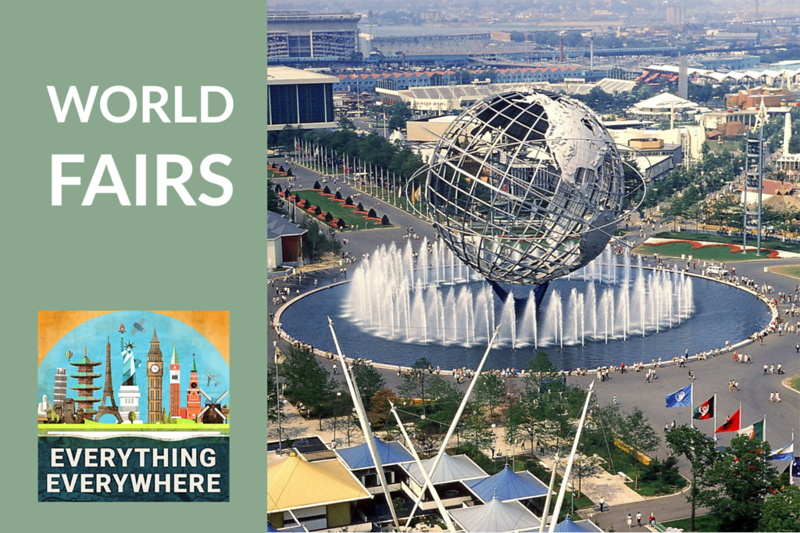 A world’s fair used to be a very big deal. They would draw tens of millions of visitors and they would showcase some of the most cutting edge advancements in science and technology. They were also responsible for the creation of some of the most iconic structures in the world.

Learn more about world fairs and how they shaped history on this episode of Everything Everywhere Daily.

So, I figured it was time that world fairs got their own attention.

Prior to the development of mass communications, spreading ideas was difficult and time-consuming. Ideas, especially complicated technical ideas, had to be spread by print. Even then it wasn’t quite the same thing as meeting with someone, watching a demonstration of something, and being able to ask them questions.

The reason why communication was so difficult was that traveling was so difficult. Most people would never travel beyond about 20 miles from where they grew up. If you made a long voyage, like immigrating to another country, it was usually a one-way trip.

It was in this light that world fairs were created.

The term world’s fair is actually more of an American term. Officially, no world’s fair has ever been called a World’s Fair. They go by several names, including International Exhibitions, International Expositions, World Expos, and other names depending on the language of the location where it was held.

For the purposes of this episode, they are all synonymous.

Fairs had always been around. County and civic fairs were traditions in Europe going back centuries. In 1798, after the French Revolution, the French Repbulic inaugurated the L’Exposition Publique des Produits de l’industrie Française, or the Exhibition of Products of French Industry.

It was a rather hastily thrown together event, and all of the exhibitors were from Paris, not even the rest of the country.

This was the first of eleven such exhibitions which were held through 1849. They all were in France and showcased French industries.

Other countries began to copy the french model holding exhibitions including Italy and the UK, but again, these events were limited in scope.

The first true event with an international focus, which is considered the first real world’s fair, was an idea hatched by Prince Albert, the husband of Queen Victoria.

He envisioned a truly global event where every nation on Earth could come and share their cultures as well as the latest advances in science and technology.

It was held in Hyde Park in a massive building known as the Crystal Palace.  The Crystal Palace really was a wonder of the 19th century. It was made out of iron and plate glass. The best way to describe it would be like a massive greenhouse or a giant modern convention center.

There were 13,000 exhibitors from 44 countries. It drew many of the most notable people of the day including Charles Darwin, Samuel Colt. photographer Mathew Brady, Michael Faraday, Karl Marx, Isambard Kingdom Brunel, and many others.

The exhibits allowed attendees to see what other cultures were like, as well as witness some of the technical innovations of the era.

Over 6 million people visited the event, and it actually turned a profit of £186,000.

The Great Exhibition was a massive hit and the international aspect of it provided a forum for people from all over the world to come together to share ideas and culture.

…and of course, it was also a way for the host country to show off.

The number of exhibitions that were hosted during the rest of the 19th century was staggering. There were well over 100 events held all over the world in dozens of countries. Sixteen were held in 1883 alone.

However, of the over 100 expos held in the second half of the 19th century, only some of them have been retroactively recognized as actual full-blown International Exhibitions by the Bureau International des Expositions,  the organization which organizes world fairs.

Even with that list, there are still too many events to go through individually. These major events were held on average about four years apart, but sometimes just two years apart.

The next major event was Exposition Universelle in Paris in 1855. They

Basically wanted to upstage what the British had done four years before.

The 1855 event actually ended up being a bit smaller than the Great Exhibition in London in attendance and exhibitors.

There was another exhibition in London in 1862, but the 1867 exhibition in Paris was the largest event so far in terms of the size of the event and attendance. The grounds were over four times larger than any previous event, and the attendance was double than anything before.

The first world’s fair outside of Europe was held in Philadelphia in 1876, known as the Centennial Exposition, celebrating the 100th anniversary of the United States. The arm and torch of the Statue of Liberty were on display as was the debut of the telephone and the first commercial ketchup.

In 1880, Australia hosted the Melbourne International Exhibition which was the first to be hosted in the Southern Hemisphere. Not surprisingly, it was the least attended world’s fair given its location. However, the structure building for the event, the Royal Exhibition Building, is still standing today and it is a UNESCO World Heritage Site.

The 1889 Exposition in Paris was the largest to date. It was the centennial of the French Revolution. Over 32 million people attended and there were over 61,000 exhibitors.  This saw the unveiling of the Eiffel Tower and it was the first of what I’d call the mega world fairs.

The 1893 Columbian Exposition was held in Chicago to commemorate the 400th anniversary of Columbus discovering the Americas. By area, it was the largest world’s fair ever, covering 690 acres. 46 countries were represented and 27.5 million people attended.

It had the world’s first Ferris wheel, and perhaps more importantly, it was electrified. The entire fairground was lit up by Westinghouse as a demonstration of their alternating current. There was an entire pavilion of electrical devices including the inventions of Nikoli Tesla.

The Midway area of Chicago where the University of Chicago is now located was the site of the fair.

The 1900 Paris Exposition Universelle set an attendance record with 50 million attendees. They built the Grand Palais as the signature building for the event, and the building is still a landmark in Paris today. The 1900 world’s fair saw the first motion pictures to be displayed at a world’s fair, the first escalator, as well as co-hosting the Olympics.

In 1904 Saint Louis hosted the Louisiana Purchase Exposition as well as, again, the Olympics.

The next five fairs were in Belgium and Italy, and they were relatively small affairs in comparison to the previous fairs.

After the first world war, there was a change in world fairs. Specialized fairs began to be hosted which were smaller and focused on a single industry, like aviation, housing, or sports.

In 1939, there were actually two world’s fairs held simultaneously in the United States, one in San Francisco and One in New York City. The New York City world fair was the last major fair before the start of the second world war. The New York World’s Fair was the first to focus on a theme, “The World of Tomorrow”, instead of just showcasing new technology.

There were obviously no world fairs held during the war, and even after the war things slowed down dramatically. From 1850 up through the second world war, there were dozens of minor world fairs every decade. After the war, you never saw anything close to the same number of events again.

The first big fair after the war was in Brussels, known as Expo 58. The Atomium, which is a giant metallic model of an atom, and one of the major landmarks in Brussels, was built for the fair. They saw over 50 million people attend.

Seattle hosted the 1962 Century 21 Exposition. The Seattle Space Needle and monorail were built for the fair and they are both still there today, as the signature landmarks of the city.

There were no major world fairs for the rest of the 70s and 80s, only specialized world fairs. The ones that were hosted in Vancouver, Knoxville, and Brisbane were all smaller fairs, even though they had ok attendance in the millions.

The only major world fair for 30 years was Expo 92 in Seville. It had a really good turnout of 40 million attendees, but it really didn’t capture the imagination of people like earlier fairs did.

Expo 2000 and 2005 were held in Hannover, Germany, and Aichi, Japan, and most people probably didn’t even know they happened.

Expo 2010 held in Shanghai, the first and only world’s fair ever held in China, was actually had the biggest attendance in history, with 70 million people. Most of them were domestic Chinese visitors.

World fairs do still get visitors, but getting exhibitors is harder as world fairs are no longer necessary to highlight cultures or to showcase new technology.

The Expo 2020 is currently going on in Dubai as I am recording this. It was postponed due to COVID, but it opened on October 1, 2021, and will go through March 21, 2022. Honestly, if I wasn’t doing this episode, I probably would have totally missed that it was happening.

Going forward, there aren’t really many world fairs scheduled. There is a specialized one in Buenos Aires in 2023 and a major fair in Osaka in 2025, and that’s it so far.

As with hosting the Olympics, not many cities are lining up to host world fairs anymore. It requires an enormous amount of land, and many countries are not willing to pay for elaborate pavilions anymore. The cost of the 2010 Shanghai Expo cost an estimated 5.2 billion dollars.

The internet and cheap airfare have made it such that you don’t need a world’s fair anymore to learn about other cultures or new technology.

If you want the world fair experience, probably the best place you could go is EPCOT Center in Disney World, which was basically designed to be a permanent world’s fair. They have the cultural and technical pavilions just like a world’s fair as well as a signature building in Spaceship Earth.

Nonetheless, for a period of time in the late 19th and early 20th centuries, attending a world’s fair was probably one of the greatest experiences you could have. If I could travel back in time, it would be one of the things that I’d love to see.