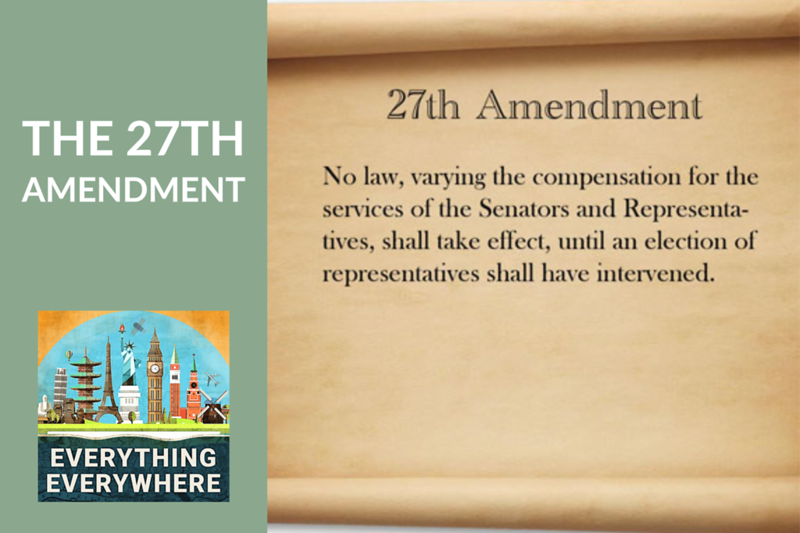 The American constitution was written in 1787, but there was a mechanism built in to amend and change the document.

The most recent amendment, however, had a path to ratification which was far different than any other of the 26 before it.

Learn more about the 27th amendment and the very circuitous route it took to ratification, on this episode of Everything Everywhere Daily.

The 27th amendment is pretty short, so I’ll just read it in its entirety.

No law, varying the compensation for the services of the Senators and Representatives, shall take effect, until an election of Representatives shall have intervened.

Basically, congress can’t give itself a pay raise, until there has been an election.

It became part of the constitution on May 18, 1992, when the Archivist of the United States approved that ¾ of the states had approved the amendment.

Seven states went through the process of formally ratifying the amendment after it became part of the constitution, most recently Nebraska in 2016.

And just as a refresher, for an amendment to become ratified, it has to be approved by Congress by ? of both houses, and then it must be approved by ¾ of the state legislatures.

It is a high bar to cross, but that’s the point. For something to become part of the constitution, it needs to have overwhelming support.

If you remember back to my episode on unratified amendments, there are a few amendments that have been stuck in limbo. They were approved by Congress, but they were never approved by the states.

What we call the 27th Amendment was once an unratified amendment. From the time it was passed by congress to the time it was ratified by the last state took a whopping 204 years!

How in the world did this amendment take so long to pass, and what eventually revived it from the dead?

Believe it or not, the Congressional Pay Amendment was actually part of a collection of 12 amendments which today we call the Bill of Rights.  Only 10 of the 12 amendments originally passed back in the 18th century.

Actually, if you want to get technical, James Madison had originally come up with 20 amendments, which was then whittled down to 17 when it was debated in the house, and then the Senate brought it down to 12 which were approved by Congress.

In case you are wondering, the 12th amendment which never was ratified dealt with Congressional apportionment. It was probably a good thing that it never passed because it just wouldn’t work in a country with 330 million people. Also, that unratified amendment was originally slated to be the first amendment on the original list of 12.

The Congressional Pay amendment came very close to passing when it was first released.

When Congress sent the 12 amendments to the states on September 24, 1789, the Congressional Pay amendment was listed second.

Then Vermont joined the union in 1791, and they then ratified it later in the year, followed by Virginia.

Kentucky joined in 1792, and they ratified it within a month of becoming a state.

…and this is where it stood for 81 years.

Nine states had ratified the amendment, but the number of states required for passage grew as more states were admitted to the Union.

In 1873, Ohio approved the amendment in protest of the Salary Grab Act which doubled the salary of the president and supreme court justices.

Likewise, 105 years later in 1978, Wyoming approved the amendment in protest of a congressional pay raise.

…and this is where things stood in 1982 when the story takes a completely unexpected turn.

19-year-old Gregory Watson was an undergraduate at the University of Texas, Austin.

For an assignment in a Political Science class, he had to write a paper about some governmental process. He researched the process for the approval of constitutional amendments.

During his research, he came across a chapter of a book on the subject of unratified amendments. The Congressional Pay amendment jumped out at him.

His paper was on the amendment and how he believed that despite being initially proposed almost 200 years earlier, it was still alive and it could still be ratified.

He turned in his paper to his teaching assistant and received……a C.

He appealed the grade to the professor for the course, Sharon Waite.

She recalled the encounter by saying “I kind of glanced at it, but I didn’t see anything that was particularly outstanding about it and I thought the C was probably fine,”

According to Watson,  “So I thought right then and there, ‘I’m going to get that thing ratified.’ “

He set about to ratify a constitutional amendment just to spite his professor.

He began writing members of congress to see if anyone would know someone back in their home state that would be interested in introducing a ratification bill.

He got a few negative replies, but mostly it was silence. No one really cared.

Then he got a positive reply from a Senator from Maine, William Cohen. The same William Cohen who would later serve as Secretary of Defense under Bill Clinton.

He had actually gotten one state to go along with his campaign.

From there, things started picking up steam.

Entering into 1992, there were three more states needed for ratification.

On May 5, both Missouri and Alabama both passed it. Then on May 7, Michigan ratified the amendment, and it becomes part of the constitution.

It only took 204 years and one disgruntled student to get the amendment passed.

According to Watson, “I wanted to demonstrate that one extremely dedicated, extremely vocal energetic person could push this through…I think I demonstrated that.”

He actually continued on this path. He realized that Mississippi never ratified the 13th Amendment which abolished slavery, and he got them to finally ratify it….even if it was just ceremonial.

As an epilogue to the story, after having driven a successful campaign to get a constitutional amendment passed, this was brought to the attention of his college professor who gave him a C.

She was blown away.

She said, “Many people have said you never know what kind of effect you’re going to have on other people and on the world. And now I’m in my 70s, I’ve come to believe that’s very, very true. And this is when it really hit me because I thought to myself, ‘You have, just by making this fellow a grade he didn’t like, affected the U.S. Constitution more than any of your fellow professors ever thought about it, and how ironic is that?'”

In 2017, 35 years after issuing the grade, Sharon Waite filed the paperwork to change Gregory Watson’s grade from a C, to an A.

Today’s review comes from listener Dean Laffan over on Podchaser. He writes….

This is easily one of the best pods on the planet and one of my top 5 GOAT In about 10 minutes, Gary delivers all you need to know on the most incredibly peripatetic topics. Here’s a fact: Even the topics you look at in your pod app and think “Ahhh … this one might not be for me ….” Bzzzzzzzz. Wrong. When you listen, you love it. I listen to a LOT of pods, and there are only a few that when I see their icon in my updated feed list, it gives me a little jolt of excitement. This is definitely one of those. Plus you get to sound really smart at cocktail parties and BBQs … “Oh The Halifax Explosion of 1917? Did you know that …..”

Thanks, Dean. I have to say your review is probably the GOAT of reviews. I’m probably going to use excerpts from it for my media kit.

Remember, if you leave a review or send in a question, you too might get it read on the show.