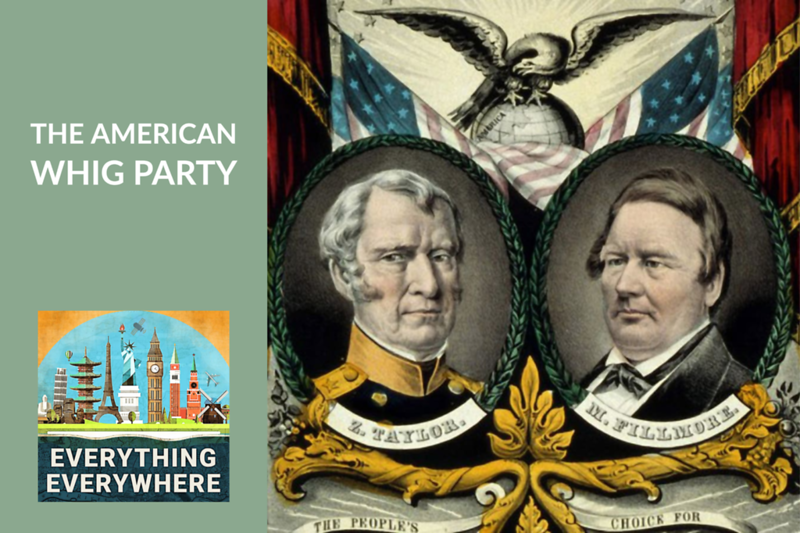 American politics has been called a two-party system. While there are two major parties today, and those two parties have been around a long time, they weren’t always the only two parties.

In fact, there was a political party in the US that, took its name from a British political party, had four US presidents, and even held control of Congress for several years.

Today, however, they are all but unknown to most people.

Learn more about the Whig party, their rise, and fall, on this episode of Everything Everywhere Daily.

My audiobook recommendation today is The Whigs’ America: Middle-Class Political Thought in the Age of Jackson and Clay by By: Joseph W. Pearson.

From 1834 to 1856, the Whigs battled their opponents, the Jacksonian Democrats, for offices, prestige, and power. The partisan expression of America’s rising middle class, the Whigs boasted such famous members as Henry Clay, Daniel Webster, and William Henry Seward, and the party supported tariffs, banks, internal improvements, moral reform, and public education.

In The Whigs’ America, Joseph W. Pearson explores a variety of topics, including the Whigs’ understanding of the role of the individual in American politics, their perceptions of political power and the rule of law, and their impressions of the past and what should be learned from history. Long dismissed as a party bereft of ideas, Pearson provides a counterbalance to this trend through an attentive examination of writings from party leaders, contemporaneous newspapers, and other sources.

By the time of the 1820 election, the Federalist Party had completely fallen apart. President James Monore literally ran unopposed.

In 1824, all four of the candidates for president who received electoral votes came from the same party: the Democratic-Republican Party.

After this election, the Democratic-Republican Party too fell apart, and they were replaced by the Democratic Party which was led by Andrew Jackson. This is the direct descendent of the modern-day political party with the same name.

In 1828 the incumbent president was John Qunicy Adams and he ran against Jackson but the party he was associated with wasn’t really an organized party. It was alternatively called the National Republican Party, the Anti-Jacksonian Party, and the Republican Party, although this was not related to the modern-day party with this name.

Andrew Jackson dominated the political landscape during this era. From 1828 to 1836 he was president, and even after his presidency, he cast a long shadow over American politics.

The opponents of Jackson were at first known simply as anti-Jacksonians. They were unified in their opposition to Jackson.

It wouldn’t be correct to say that the anti-Jacksonians were simply a revival of the Federalist Party. By this time, there had been a complete realignment in the American political system. Some Democratic-Republicans went on to form the new Democratic Party, but some also became anti-Jacksonians.

The beginning of the Whig party began with the Nullification Crisis. Congress had passed a series of tariffs in 1828 and 1832 which dramatically increased the taxes on imported goods. This was vehemently objected to in the south which called it the “Tariff of Abominations” as the South was highly dependent on agricultural exports.

In 1832, the South Carolina state legislature passed a bill that nullified the federal tariff. They claimed that a state could nullify any federal law which affected them.

Around the country, anti-Jacksonian groups began to form and they created small Whig Parties.

Calling their groups Whig Parties was a joke and a jab at Jackson, but it is a joke which is completely over the heads of most modern-day people, so it requires explaining.

The Whig Party was actually a political party in Great Britain that formed in the late 17th century and lasted through the mid 19th century. Ironically enough, they dissolved around the same time as the American Whig party did.

The British Whigs were pro-parliament and supported a constitutional monarchy rather than an absolute monarchy. Their positions changed somewhat over the course of almost 200 years, but for our purposes, we can say that they were less supportive of the monarchy.

The joke was in the American context that it made Andrew Jackson out to be a king, hence, the opposition groups called themselves whigs.

Here I also might explain the origin of the name, but it does sound really weird.

Whig is spelled with an “h” and it has nothing to do with wigs that you wear on your head. Whig is short for whiggamor, which is a term for a cattle driver. It came from Scottish cattle drivers who would say Chuig an bothar which then got morphed into whiggamor by the English.

Whiggamor became the name of a group of Scottish rebels in the English Civil War and later was used to describe those who blocked Charles II’s son James from ascending to the throne because he was Catholic.

However, for our purposes, it was simply used to mean opposition to authority.

The birth of the American Whig party is often given as 1833 when the anti-Jacksonians took control of the Senate.

The core of the early party consisted of National Republicans such a Henry Clay and Daniel Webster, defectors from the Democratic Party, as well as Anti-Masonic party members, and yes that was a thing and it will be the subject of a future episode.

The party wasn’t very organized at this point. It still had opposition to Jackson at its core.

In the 1836 election, they ended up having two candidates which received electoral votes. It wouldn’t have made a difference as combined they didn’t beat Martin van Buren, but it was still disorganization.

In 1840, they nominated a hero of the War of 1812, William Henry Harrison who was from the north. They picked as his running made a southerner, John Tyler.

Harrison won the election quite handily. Van Buren had the bad luck of being president during the Panic of 1837, which was probably the biggest economic downturn before the Great Depression.

Harrison, on the other hand, had the bad luck of dying just 31 days after becoming president.

Tyler wasn’t much of a Whig as president. He appointed Democrats to his cabinet, and he wasn’t very popular. The Whig party dropped him as their candidate in 1844. Instead, they ran Henry Clay from Kentucky, who lost to James Polk.

Polk promised and vowed to only serve one term, and he did just that.

The Whigs ran General Zachary Tayler who had just come off success in the Mexican-American War.

He won the presidency in 1848, becoming the second Whig to win the White House, but he too died in office 2 years into his term. He was replaced by his running mate, Millard Fillmore.

By the time the 1850s rolled around, the Whig issues of a national bank, infrastructure improvements, and opposition to tariffs took a backseat to the issue which completely dominated American life: slavery.

The Whig party had members in both the north and the south, with two of their four presidents coming from each.

However, the north-south divisions in the party couldn’t withstand the growing debate about slavery.

In the 1852 election, for the second time, the Whigs didn’t nominate their incumbent president. This time they selected General Winfield Scott, who was soundly defeated.

By 1856, they didn’t even have their own candidate for president. They supported Millard Fillmore who ran as the candidate from the Know Nothing Party. They received significantly fewer votes than the new Republican party, which had positioned itself as a staunchly anti-slavery party.

By 1856, American politics had once again realigned and there was no future for the Whig party.

In 1860, a former Whig Party member did win the presidency, however: Abraham Lincoln.

The Whigs have been considered by historians to be a party that had no real ideas. They were formed out of opposition to Andrew Jackson, not out of support of anything in particular. The moment a real divisive issue came to the forefront of politics, aka slavery, the Whig party couldn’t survive.

While I don’t think that is entirely true, I also don’t think it is totally false either.

Believe it or not, there was an attempt to revive the Whig party in 2008 as a centrist political party. It was formed by a group of veterans who were sick of watching people bicker about politics on TV in the mess hall. The animal they picked to represent them was the owl.

They never got very far but in Philadelphia, a man by the name of Robert Bucholz actually won a local election for the position of judge of elections running under the Whig Party Banner.

He was the first Whig to win an election in the United States in over 150 years.

The Associate producer of Everything Everywhere Daily is Thor Thomson.

I’ve become addicted to this short, educational podcast. I’m a history and travel buff and love hearing about interesting facts in a quick digestible way. I’ve listened to every episode and just sometimes wish I was patient enough to wait a few days so I can queue them up and listen longer. But it’s not just me. I’ve listened to the founding of Bell Labs episode with my husband who worked there and the Great Molasses Flood with my son who learned about it in school. Thanks for all you do!

Thank you very much aroundtheworldwi. (Actually I’m not sure if your user name got cut off). By the way, if you love travel, I might have something for you that you might enjoy in a few months. Just a small tease….