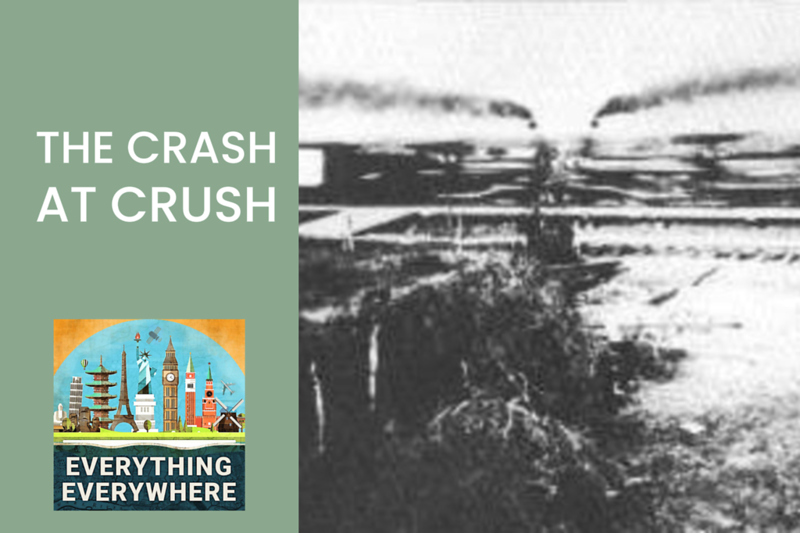 In 1896, the United States was experiencing what we now call a recession. The Panic of 1896 had made life tough on everyone, and many of the companies in the highly competitive railroad business were looking for new ways to make money.

One man, William George Crush, came up with a smashing idea.

His idea was so popular that it drew enough people to create the second-largest city in Texas for a single day, and then subsequently got him fired.

Learn more about the Crash at Crush on this episode of Everything Everywhere Daily.

My audiobook recommendation today is Nothing Like It in the World: The Men Who Built the Transcontinental Railroad 1863-1869 by Stephen Ambrose.

This is the story of the men who built the transcontinental railroad. In Ambrose’s hands, this enterprise comes to life. The U.S. government pitted two companies – the Union Pacific and the Central Pacific railroads – against each other in a race for funding, encouraging speed over caution.

At its peak, the workforce approached the size of Civil War armies, with as many as 15,000 workers on each line.

Marketing and promotion are not unique to the modern world. Ever since people had money, other people have figured out ways to get them to part with it.

A case in point is one William George Crush. Crush was a passenger agent for the Missouri-Kansas-Texas Railroad. It was known as the Katy Railroad due to its initials, K and T.

The Katy Railroad had just extended their line from Dallas to Houston. As part of the line extension, the railroad also upgraded its fleet of engines from 30-ton engines to larger 60-ton engines. The larger engines being able to pull more cars and carry more freight and passengers.

The extension of the line and the purchase of the new engines came at a very bad time. The Panic of 1896 had set in and the economy had gotten soft.

The company needed to think of ideas to get more passengers.

William Crush had just such an idea.

What Crush proposed was to take two of the old 30-ton steam engines, put them four miles apart from each other, build up steam, get them traveling at full speed, and then have them smash into each other in a spectacular head-on collision.

I should note that Crush was a friend of P.T. Barnum.

This had been done before. Just a few months earlier the Columbus and Hocking Valley Railroad in Ohio staged a train collision at Buckeye Park, which was an amusement park owned by the Railroad. Over 20,000 people showed up to watch the spectacle.

It was a financial success as almost all of the 20,000 people had purchased train tickets to get there, as well as buying food and souvenirs at the event.

Crush wanted to do something similar. He pitched the idea to the upper management, and they agreed. They would crash two of their trains together on September 15, 1896.

The railroad wouldn’t sell tickets to the event per se, but they would have a special rate for anyone in the state of Texas who wanted to buy a train ticket to come and see. The price was $2 roundtrip, which is the equivalent of $62 today.

They borrowed a circus tent from the Ringling Brothers circus. They had a restaurant serving meals, a midway,  souvenirs were for sale, and there were medicine shows. It had all the atmosphere of a carnival or a fair.

The grounds of the event were located about 10 miles north of Waco, Texas. There was a big sign welcoming everyone to the pop-up city of Crush, Texas, named in honor of George Crush, the originator of the event.

They selected two steam engines for the collision. One was painted green with red stripes, and one was painted red with green stripes. Each engine pulled six cars, which was used to display advertising. Each of the cars was filled with wooden railroad ties to add to the weight.

A special four-mile track was laid alongside the main track, as to not ruin the main railway. Each end of the track was on a small hill so the trains could get a bit of a downhill head start. They would meet together in a small valley in the middle.

The day before the event, each train was tested to estimate the speed and the point at which they would meet.

One thing you have to know about steam engines is that even if you aren’t crashing them into each other, they can still be dangerous. They run on compressed steam, and the high pressures in the steam boiler could on occasion explode.

Crush and his team got the opinions of engineers who assured them that this was safe. The boilers wouldn’t explode even if they were involved in a collision.

They had hoped that 20,000 people would show up. They got way more. Somewhere between 40,000 and 60,000 people ended up attending, and an exact count was impossible because there were no tickets to enter the event, and not everyone arrived by train.

The pop-up city of Crush was, for one day, the second-largest city in Texas.

At 5 pm, the event commenced.

The two trains slowly came together in the middle for photos. The two conductors came out to shake hands between the trains.

The trains then backed up to prepare for their sprint to the middle.

Each conductor had instructions for exactly when they would start the train, and what the exact settings would be.

At the appointed time, each conductor started the engine, tied down the whistle, and after four turns of the wheel, jumped out.

The public was held back 200 yards from the track for safety, although the police were having a hard time keeping the crowds back that far. They hadn’t expected crowds this large.

The approach of the trains was described by the Dallas Morning News. They said,

The rumble of the two trains, faint and far off at first, but growing nearer and more distinct with each fleeting second, was like the gathering force of a cyclone. Nearer and nearer they came, the whistles of each blowing repeatedly and the torpedoes which had been placed on the track exploding in almost a continuous round like the rattle of musketry… They rolled down at a frightful rate of speed to within a quarter of a mile of each other. Nearer and nearer as they approached the fatal meeting place the rumbling increased, the roaring grew louder…

The trains hit an estimated top speed of 45 miles per hour or 72 kilometers per hour.

When the trains hit each other, it did not go as the engineers told them it would.

The boilers in both trains exploded immediately on impact.

The 200-yard distance was designed to protect the spectators from the collision of the train, not from two boilers exploding.

Two men and a girl were killed from the debris. Several people were seriously injured including the official photographer for the event, who lost an eye.

After the crash and the explosion, thousands of people rushed to the crash site to pick up pieces of the wreckage to keep as souvenirs.

News of the even spread around the world. The next day, George Crush was fired.

What the Katy Railroad thought would happen in the aftermath of the deaths and injuries didn’t happen.

Everyone who was in attendance went home and told their friends. Most people weren’t even aware that anyone died, and if they did it was a mention they heard about after the event.

In fact, there was almost no negative publicity.

The railroad quickly settled with the families of everyone who was killed or injured.

The Great Crash at Crush actually began a trend in the United States which would last for 30 years of staging train crashes. One man, Joe Connolly, destroyed 146 trains between 1896 and 1932, mostly at State Fairs and other festivals.

Connolly upped the ante by strapping dynamite to trains or covering them in gasoline so they would be on fire when they crashed.

The last staged train crash for the public occurred in 1935. After that, there wasn’t as much interest, and trains just got too expensive.

Even though it hasn’t been done in 85 years, I have to admit if they were to stage a train crash again and they put it on Disney+ or something, I’d probably subscribe just to see it.