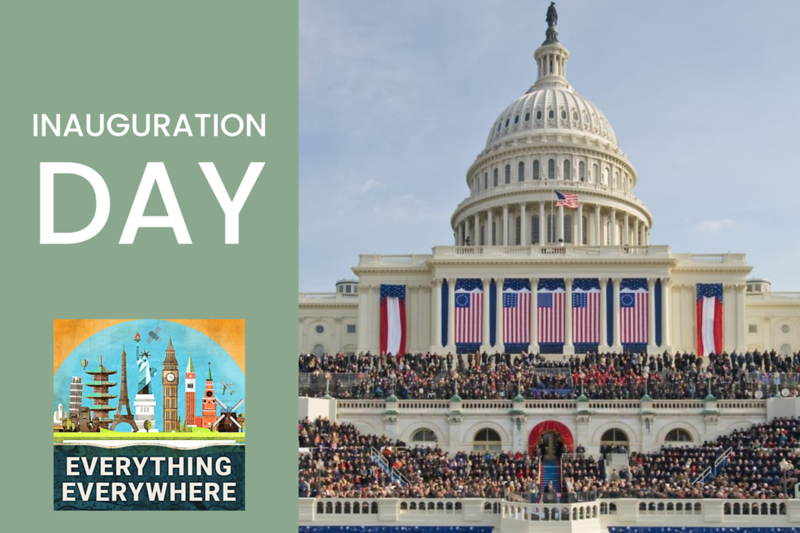 Why do we use January 20th as the date, and how did many of these traditions get started?

Learn more about the history and traditions of the Presidential Inauguration on this episode of Everything Everywhere Daily.

If you are a student of American history or presidential history, you’ll find plenty to watch on CuriosityStream. They have shows on the War of 1812, the Cold War, the Great Depression, the Civil War, and many of the cultural transformations in American Society.

CuriosityStream is currently running a special where you can get a full year for 40% off, or only $11.99. That’s only $1 a month for some of the best educational programs.

Inauguration Day is the day the president of the United States takes the oath of office and begins a new presidential term.

Because it is so short, I’ll read the oath of office here:

Inauguration Day wasn’t always on January 20th. In fact, for most of American history, the day fell on March 4th.

When the constitution was first written, one of the issues which had to be dealt with was the time it took to get information and people from the various states to Washington.

Everything was done by horseback and as the nation grew westward, the length of time it took to get to Washington increased. California was admitted to the Union in 1850, 12 years before the transcontinental railroad was completed.

Likewise, the nation didn’t always vote on the same date. For the first presidential elections, there was no popular vote. State legislatures selected electors, and they often voted as early as September.

So the March 4th date was to give ample time between the electoral college voting, and for the incoming president to assemble a cabinet and get everyone to Washington.

The first presidential inauguration didn’t actually take place on March 4. Due to a bad winter, Washington’s first inauguration took place on April 30, 1789, in New York City. It was held on the balcony of Federal Hall on Wall Street. You can visit Federal Hall National Monument today, however, it isn’t the same building, and there is no balcony.

There are several traditions that started with George Washington.

First, was putting his hand on a bible when taking the oath of office. The bible which was used was taken from the St. John’s Lodge No. 1 of the Ancient York Masons.

The bible was randomly opened to Genesis 47, which says, “Zebulun shall dwell at the haven of the sea; and he shall be for a haven of ships, and his border shall be unto Zidon”. The passage was totally random and had absolutely no meaning whatsoever.

The same Washington Bible has been used in the inaugurations of several other presidents: Warren Harding, Dwight Eisenhower, Jimmy Carter, and George H. W. Bush.

There is no requirement about the use of a bible. It is just tradition. Some presidents haven’t used a bible at all. John Quincy Adams and Franklin Pierce put their hands on a book of law. Theodore Roosevelt, having taken the oath after the death of William McKinley, didn’t put his hand on anything.  Lyndon Johnson put his hand on a Catholic missal, because they couldn’t find a bible on Air Force One, and didn’t want to waste time looking for one.

Franklin Pierce was also the only president to use the words “affirm” rather than “swear” in the presidential oath.

Washington also ad-libbed the phrase “…so help me God” and the end of the Oath, and then kissed the bible, both of which have been done by subsequent presidents.

There have been several cases of presidents flubbing the oath. In 1909 William Howard Taft repeated the oath incorrectly as given by the Chief Justice.

Eisenhower inserted the word “the” in front of “President”, and Lyndon Johson was prompted to say “presidency” by Chief Justice Earl Warren.

Chief Justice John Roberts moved the word “faithfully”, and President Obama, after pausing, followed his lead. He retook the oath again the next day just to be safe.

Washington also gave the first inaugural address. He didn’t give it to the public which had gathered for the inauguration, however. Rather, he went inside and gave it to Congress.

His second inaugural address was the shortest in history at only 135 words. This time he took the oath in Philadelphia.

The longest inaugural address in history was given by William Henry Harrison, who gave a marathon 1-hour 45-minute speech which was 8,445 words long. To put that in perspective, the scripts I create for this podcast are usually between 1,000 to 2,500 words long.

No president who ascendent to the office at the death of a predecessor had given an inaugural address, but they all have addressed congress soon after.

John Adams became the first president to have the oath administered by the Chief Justice of the Supreme Court. This too is not required by law, and technically anyone can administer the oath of office.

There have been several oaths that have been administered since then by someone other than the Chief Justice. Usually, upon the death of a president, they try to get anyone who is a judge. In the case of Calvin Coolidge, when Warren Harding died, the oath was administered by his father who was a notary public.

The change in the inauguration date occurred with the 20th amendment, which was known as the lame-duck amendment. Prior to this, both the congress and the president were inaugurated on the same date, March 4th.

The first president to be inaugurated on January 20th was Franklin Roosevelt during his second inauguration in 1937.  Needless to say, inaugurations suddenly got a lot colder.

There have been other traditions that have started in the 20th century. In 1921 Warren Harding traveled to the capitol in an automobile.

The first televised inauguration was Harry Truman in 1949.

Since 1953 Congress has hosted a luncheon for the incoming president.

In 1965, Lady Bird Johnson held the bible, becoming the first First Lady to have an active role in the inauguration.

An interfaith prayer service was started in 1985.

One tradition which never got off the ground was adopted by Andrew Jackson. He invited the public to the White House and over 20,000 people showed up. There were so many people, Jackson had to flee the White House through a window.

To date, there have been 59 presidential inaugurations over a period of 232 years.

Every inauguration is different, but they all share common traditions that have tied them together throughout American history.