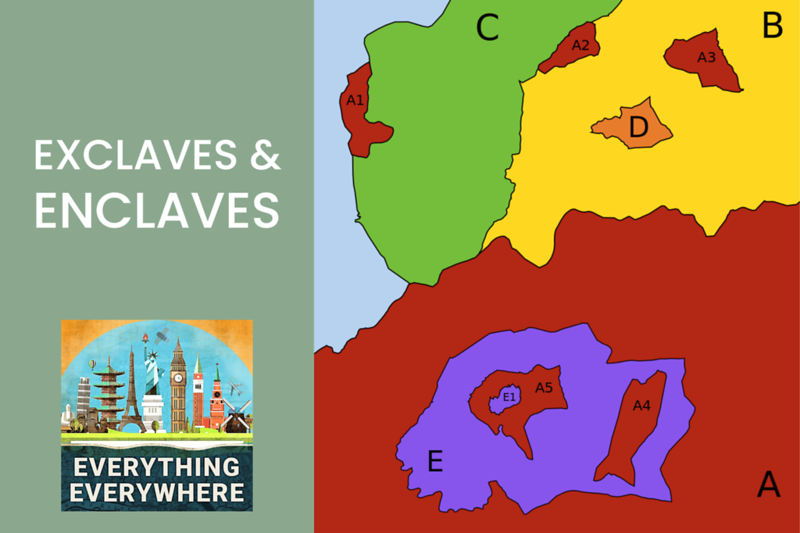 Normally, if a foreign country has you totally surrounded, that isn’t a good thing. However, in some parts of the world, it is a normal, everyday occurrence.

Due to historical quirks in drawing maps, there are parts of some countries which are separate from the mainland and are totally surrounded by another country.

Learn more about exclaves and enclaves on this episode of Everything Everywhere Daily.

My audiobook recommendation today is Prisoners of Geography: Ten Maps That Explain Everything About the World by Tim Marshall.

All leaders of nations are constrained by geography. In this audiobook journalist Tim Marshall examines countries around the world to see how their weather, seas, mountains, rivers, deserts, and borders provide a context often missing from our political reportage: how the physical characteristics of these countries affect their strengths, weaknesses, and the decisions made by their leaders.

We should probably start this discussion with some definitions.

An enclave is just the opposite. It is “a territory (or a part of one) that is entirely surrounded by the territory of one other state.”

For the most part, one country’s exclave is another countries enclave. However, this isn’t always the case.

Likewise, Vatican City and San Marino are both enclaves of Italy.

However, none of these examples are exclaves as the entire country is surrounded and there isn’t a part that is separate from the main part of the country.

One example of an exception the other way around is the Nakhchivan region of Azerbaijan. It is totally, physically separated from the rest of the country, however, it is sandwiched between Armenia and Turkey, so it isn’t an enclave of either country.

True enclaves and exclaves are not uncommon, but they are usually pretty small, with small populations, and aren’t that well known outside of geography enthusiasts.

Despite being part of Italy, they use the Swiss Franc instead of the Euro, even though the Euro is technically the legal tender. They use Swiss tax rates for their value-added tax. The gambling laws are less strict than in Italy, which is why the dominant building is a giant casino.

Campione d’Italia isn’t the only enclave that Switzerland had. In the north, there is the German exclave of Büsingen.

As with Campione d’Italia, Büsingen isn’t far from the German border. It’s only 680m at its closest point.

In 1918 the citizens of Büsingen voted overwhelming to become part of Switzerland, but it never happened because the Swiss would have to offer Germany something in return, and they didn’t have anything they would part with.

Here too they mostly use Swiss Francs. Their electricity and water are provided by Switzerland, and their local football club plays in Swiss leagues.

Germany also has another set of exclaves, and these are really odd. They are only separated from the rest of Germany by a few meters. These are the five exclaves that were created by the Vennbahn.

The Vennbahn was a train track that went through Germany. After WWI, one of the terms of the Treaty of Versailles was that the track would be ceded to Belgium….but just the track. It was a narrow ribbon of land only a few meters wide that contained the track.

This left several parts of Germany west of the train track physically separated by a few meters.

In WWII, Germany took back the train tracks, but it was given back to Belgium after the war.

Today, the train no longer runs and it is now a bicycle path. There was talk of it going back to Germany now that it is no longer a train track, but Germany agreed that Belgium could keep it. And why not? It is basically a bike path in Germany, mostly used by Germans, that Belgium has to pay for.

The unique border came about from the 1843 Treaty of Maastricht. The border literally goes through several buildings. The rule was that whatever country had the front door was the country that the building was considered in.

People who had a house that straddled the border would often change the location of the front door when the taxes would be beneficial.

Moreover, within some of those islands of Belgium surrounded by the Netherlands, have within them exclaves of the Netherlands!  These are called second-order enclaves.

There is another second-order enclave in the Middle East.

Within the borders of the United Arab Emirates is a part of Oman known as Nahwa. Inside Nahwa is more territory of the UAE known as Madha. Thankfully, the UAE and Oman don’t bother with border controls in this particular area.

This sheer number of these enclaves was horrible for anyone who lived there. There were a total of 50,000 people living within the 198 enclaves between the two countries.

India and Bangladesh require passports and a visa to cross borders. Anyone who lived in one of these enclaves was effectively trapped because they couldn’t leave get a visa because they would have to cross a border to get the visa.

While the treaty was undoubtedly necessary, it did leave many people on both sides of the border who were suddenly in the wrong country.

Within the United States, there aren’t many true exclaves. The Kentucky Bend is the westernmost point in the state of Kentucky and it is totally surrounded by Missouri and Tennessee. It was created by a bend in the Mississippi River caused by the 1812 New Madrid Earthquake.

It is a peninsula that is surrounded by the river, which belongs to Missouri, and a land border with Tennessee. According to the last census, Kentucky Bend has a population of 18.

Ellis Island and Liberty Islands in New York Harbor are technically part of New York State, but they are totally surrounded by the waters of New Jersey, making them exclaves of New York.

Things such as embassies are not counted as enclaves, because that involved extraterritoriality, and that is a subject for another episode.

A pene-enclave is a territory that can only be reached by land by going through another country, but it isn’t totally surrounded.

All of Alaska is a pene-enclave because you have to drive through Canada to get there.

Likewise, Point Roberts, Washington, and the Northwest Angle in Minnesota are also pene-enclaves. They are connected to the US by water, but to go there by land, you have to cross into Canada.

There are also such things as practical enclaves, where it might be contiguous with the territory of a country, but realistically you have to go through another country to get there. These are usually mountain valleys where the mouth of the valley is in another country.

The Spanish village of Os de Civís is fully within Spain, however, the only way to get there by road is to drive through Andorra.

I’ve really only scratched the surface when it comes to geographical oddities. There are dozens more enclaves, pene-enclaves, practical enclaves, and cultural enclaves around the world. All of which have a unique story as to how they wound up being a country inside of a country.