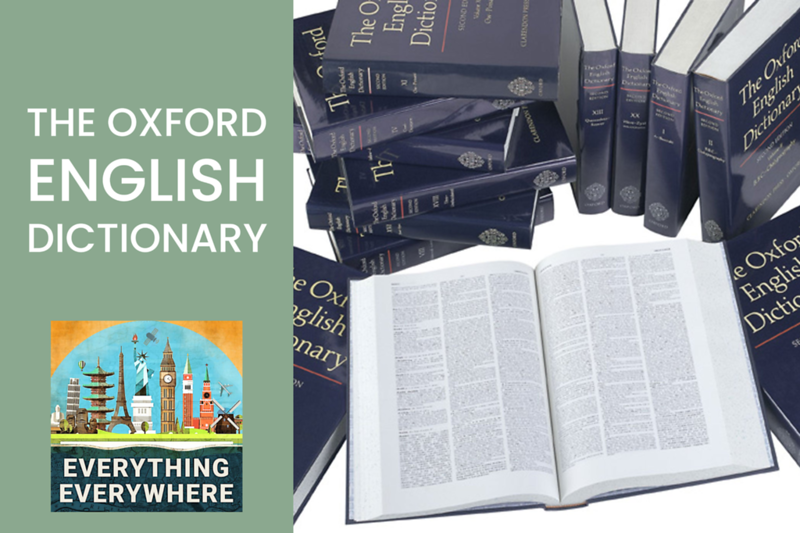 In 1844, the Philological Society of London began investigating the creation of a new English dictionary. This initial foray would lead to a dictionary that would be unlike any other dictionary ever created.

It would not just give the definition and spelling of a word, but a complete history of each word and where it came from. It would be one of the most ambitious literary projects in history.

Learn more about the Oxford English Dictionary on this episode of Everything Everywhere Daily.

My audiobook recommendation today is The Professor and the Madman by Simon Winchester.

Professor James Murray was the distinguished editor of the OED project. Dr. William Chester Minor, an American surgeon who had served in the Civil War, was one of the most prolific contributors to the dictionary, sending thousands of neat, hand-written quotations from his home.

After numerous refusals from Minor to visit his home in Oxford, Murray set out to find him. It was then that Murray would finally learn the truth about Minor – that, in addition to being a masterly wordsmith, he was also an insane murderer locked up in Broadmoor, England’s harshest asylum for criminal lunatics.

The London Philological Society is the oldest organization in Great Britain dedicated to the study of language.

Formed in 1842, one of their first objectives was to create a list of the deficiencies of the English language. By 1844, they had hatched the idea of creating a new dictionary that would solve the problems they saw in current dictionaries.

The process was incredibly slow.

It took until 1857, to establish a committee to create a list of Unregistered Words. These were words that weren’t in current dictionaries or were poorly defined.

If this had been the extent of what the Philological Society had done, I wouldn’t be doing an episode about this.

The man who headed up the committee was Richard Chenevix Trench. Trench wasn’t interested in just coming up with a list of unregistered words. His ambition was much greater.

The report he produced was something else entirely. His report was titled On Some Deficiencies in our English Dictionaries. It detailed all of the problems with current English language dictionaries.

He noted problems with a lack of coverage of obsolete words, history of words, synonyms of words, and poor examples and illustrations of words.

This would be a massive massive undertaking.

In 1858, the Philological Society formally called for the creation of a new dictionary which they called A New English Dictionary on Historical Principles.

The first order of business was hiring someone to be the editor. Trench wasn’t able to take on the assignment as he was appointed the Dean of Westminster Abbey.

The job fell to Herbert Coleridge.

Coleridge was only 29 when he was appointed in 1860. He created the outline and strategy for the project. He began the system to categorize the hundreds of thousands of quotes that would be required.

Unfortunately, in 1861 he died of tuberculosis at the age of 30.

The editor’s job then fell to Frederick James Furnivall, one of the founders of the Philological Society.

Furnivall was an excellent scholar, had great enthusiasm for the project, and was a horrible administrator.

All of the quotation cards, and the system which Coleridge developed, was put into total disarray. All the words beginning with “Pa” were lost for over 12 years before they showed up in Ireland.

His underlings couldn’t stand working for him. He has subeditors for individual letters of the alphabet, and the subeditors for A, I, J, N, O, P, and W all quit on him.

He eventually stepped down and in 1878 he handed off the mess to one James Murray. The transfer was part of the deal for the dictionary finally getting a publisher. 20 years after the project started, the Oxford University Press agreed to publish the massive project.

Murray had previously applied for the job back in 1861. In the letter he sent to the board, he said he had ‘intimate acquaintance’ with Italian, French, Catalan, Spanish and Latin, and ‘to a lesser degree’ Portuguese, Vaudois, Provençal & various dialects’. In addition, he was ‘tolerably familiar’ with Dutch, German and Danish. His studies of Anglo-Saxon and Mœso-Gothic had been ‘much closer’, he knew ‘a little of the Celtic’ and was at the time ‘engaged with the Slavonic, having obtained a useful knowledge of the Russian’. He had ‘sufficient knowledge of Hebrew and Syriac to read at sight the Old Testament and Peshito’ and to a lesser degree he knew Aramaic, Arabic, Coptic and Phoenician.

Unfortunately, his knowledge and skill didn’t get him the job in 1861 because he didn’t have a university degree.

It was under James Murray that the dictionary really began to take shape. Murray in addition to being a Scottish polymath who knew many languages and had a deep love of word etymology, was also very organized.

From the beginning, the project was so overwhelmingly large that they needed volunteers to do much of the research. In this respect, it was the original Wikipedia.

However, under Furnivall, much of what was sent in was unorganized and wasn’t well edited. This improved greatly under Murray.

The original plan after Oxford University Press gained oversight of the project was to publish the complete work in 10 years.

Despite two decades of work, the volume of information they had to plow through was so great, that that deadline proved impossible.

At its peak over 1,000 quotation slips from members of the public arrived daily and by 1880 they had over 2.5 million of them, all of which had to be organized.

The most significant contributor, both in terms of quality and quantity was one, Dr. William Minor. He would send his contributions from the Broadmoor Asylum for the Criminally Insane in Berkshire, England.

It was assumed that he worked at the facility given the high quality of the submissions he provided and the fact that he was a doctor. James Murry eventually discovered that he was in fact a patient. He was an American Civil War veteran who came to London, and in a paranoid fit, killed a man.

Despite his condition, Murry and Minor later became friends.

Murray eventually published the first volume of the dictionary in 1884. It was 324 pages long and covered A to Ant. It was at this time that Murry hired his primary assistant Henry Bradley.

Eventually, Oxford University Press demanded that Murray move to Oxford and that they hire more people to speed up the development of the dictionary.

Murray remained the editor of the project until his death in 1915.

The last volume of the dictionary was published on April 19, 1928. Seventy years after the project was conceived by Richard Trench. There were 125 individual installments released over 44 years.

In 1933, a one-volume supplement was released which covered new words and meanings, with an emphasis on the oldest volumes which were released.

All of the releases and the supplement were rebound in a huge 13 volume set in 1933 which finally was under the name “The Oxford English Dictionary”.

The entire dictionary was and is an expensive purchase. In 1971, they issued a 2 volume edition of the book, where each page had 9 pages of the previous edition in extremely tiny type. A magnifying glass was provided so you could actually read the text and it became its best selling version.

After the 1982 supplement was released, the decision was made to create a second edition, 98 years after the first volume of the first edition was released.

The biggest challenge with the second edition would be digitizing everything.

In 1984 they launched the New Oxford English Dictionary Project. Over a period of 5 years, they had to input all 60,000,000 words, and 350,000,000 characters,  which made up all of the definitions and supplements, and well as new additions to the definitions. The project used 120 people doing data entry and 50 proofreaders. The total cost was $13.5 million.

Once it was digitized, however, it wouldn’t have to be done again.

The second edition was mostly digitizing, and condensing all of the supplements into the main dictionary, with some updates and additions.

After the launch of the online version in 2000, work began on the third edition. This would be a complete revision and rewrite of the entire dictionary.

As with the first edition, which released print updates from 1884 to 1928, the third edition is releasing periodic updates on the online version.

The third edition is expected to be complete in 2037. It will approximately double the size of the dictionary.

There are currently 600,000 entries in the Oxford English Dictionary, with new entries being added every year. The most recent round of additions included entries for “assault weapon”, “chicken scratch”, “UFO”, and “weaksauce”.

If you are a word lover or have one in your life, and you want to buy them the ultimate gift, the complete 20 volume set of the Oxford English Dictionary 2nd Edition will only run you about $1,500 brand new or about $950 used on eBay.

In the almost 150 year history of publishing the dictionary, the Oxford University Press has never made a profit.

This is episode 200 of Everything Everywhere Daily!

I just wanted to give a big thank you to everyone who supports the show over on Patreon, who has left reviews online, or who has told their friends and shared the show with others.

The number of people who are listening every day keeps growing, which means there are more and more people who are learning interesting things about the world we live in.

Please share this with someone curious in your life who you think would enjoy it.