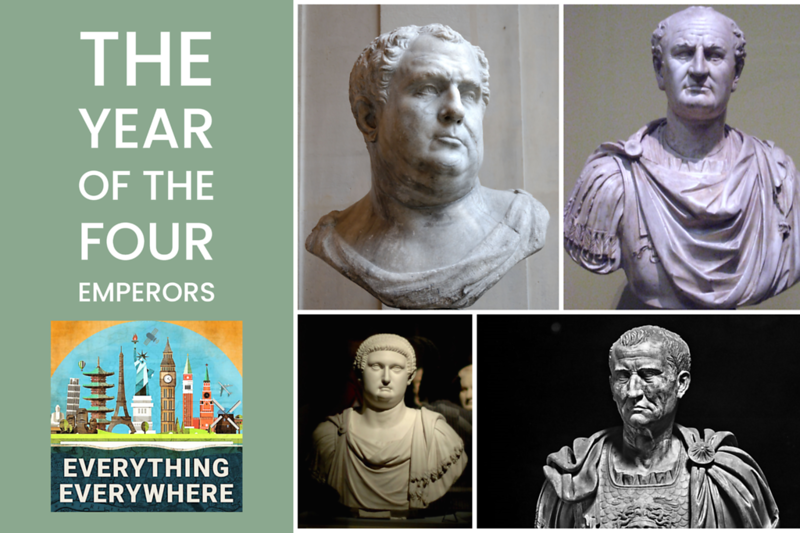 As long as the Roman empire lasted, they never created a set method of choosing successors to emperors. This inability to have an idea of who would be next in line caused numbers problems during the history of the empire.

The first major succession crisis occurred in the year 69. One emperor died, and there was no clear replacement. The result was chaos.

Learn more about the Year of the Four Emperors on this episode of Everything Everywhere Daily.

To understand the event of the year 69 in Rome, we first have to understand what happened the year before in 68, which set the groundwork for this most unusual year.

The year 68 began with Nero as the emperor of Rome.

Many of the stories attributed to Nero, like him playing the fiddle while Rome burned down, are probably apocryphal.

Nonetheless, he was widely considered a horrible emperor. You won’t find many people in history who have had good things to say about Nero.

While he may not have caused the great fire in Rome, he certainly took advantage of it. He built a palace which was the largest building ever built in the ancient world.

He also raised taxes to pay for his extravagance.

A revolt in Gaul took place with the intent of installing Lucius Livius Ocella Sulpicius Galba, the governor of Hispania Tarraconensis, as emperor.

The Gaulic revolt wasn’t successful, and Galba wasn’t even the leader of the revolt. The senate denounced Galba as a public enemy

However, that wasn’t the end of the insurrection. It was just the beginning.

The head of Nero’s Praetorian Guard, Nymphidius Sabinus, led a plot to transfer allegiance from Nero to Galba. Despite being declared a public enemy, support for Galba grew.

Nero fled the city, and while he was away the Senate tried him in absentia. Knowing the end was near, Nero killed himself, or according to legend, he had a servant do it because he was too much of a coward.

Galba then entered Rome with one of his legions and he was proclaimed emperor by the Senate.

This was a pretty significant moment in the history of Rome. Nero was the last of the Julio-Claudian Dynasty. This was the family of Augustus and Julius Caesar. This family was the only ruler that Rome knew for the last 100 years.

With Galba, they were in new territory. Not only was he not a member of the Julio-Claudian family, but he was also old. He was 69 when it became emperor, and he had no children of his own.

Galba was also the first military leader who was proclaimed emperor by his troops. Something which would become the norm later in the history of the Empire.

As we entered the year 69, Galba was emperor, and he was the first of the four emperors that year. As you can guess from the phrase “the year of four emperors”, Galba was not going to be there very long.

On his way to Rome, he increased taxes on towns that wouldn’t recognize him. He overturned many popular reforms of Nero. Most importantly, he didn’t pay the Praetorian Guards the money which was promised them by the leader of the revolt. A lesson which future emperors would pay heed to.

On January 1, he found out that the legions in Germania refused to recognize him as emperor and instead acclaimed their leader, Aulus Vitellius as emperor.

A member of the nobility, Marcus Salvius Otho, wanted to become emperor himself, so he did what Galba wouldn’t. He paid the Praetorian Guard. On January 15, Galba was assassinated by his guard in the forum, and that same day the Senate recognized Otho as Emperor number two for the year.

Otho came to power via bribery and skulduggery. Where Galba was 70 when he died, Otho was only 36 when he came to power. It wouldn’t even have been old enough to have been a consul during the republican period.

Otho wasn’t necessarily a bad guy. During his time in power, he was just, showed mercy, and was relatively popular with the people of Rome.

However, he has one massive problem. Vitellius, the guy that the legions up in Germania declared as emperor, was still claiming to be emperor and was coming to Rome to take it.

Otho went up to meet Vitellius. He offered to marry Vitellius’ daughter and come to a peaceful solution to the matter, but Vitellius, who commanded the best, most experienced legions in the Roman army, wanted to decide the matter on the battlefield.

Otho and Vitellius met at the Battle of Bedriacum, the first battle between Roman forces in over 100 years.

Vitellius won, 40,000 Romans died, and Otho took his own life. This all went down on April 14, and Vitellius was now emperor number three in the year 69.

The senate declared Vitellius emperor, but he was unpopular from the beginning.

He spent money lavishly on useless extravagances. He held three banquets per day for each meal. He held triumphs and games. He was draining the treasury quickly and going into debt. He would summarily execute anyone who questioned his decisions. He would kill anyone who named him in their will.

As everything I’ve described this year had been happening, way over the in the east another general had been acclaimed emperor by his troops. The legions in Africa, Egypt, Judea, and Syria had all thrown their support behind Titus Flavius Vespasianus, known to history as Vespasian.

Vitellius was simply closer to Rome and was able to confront Otho immediately. Vespasian was much farther away and it took more time to get to Rome, but what he controlled was far more important.

The east was where the money was made. Egypt was the breadbasket of the Roman Empire. Without control of the east, Rome would starve and go broke.

Legions from Judea and Syria began the march to Rome. Along the way, more legions who were stationed along the Danube threw their support behind Vespasian. The Danube legions, being much closer, began to march on Rome.

Vespasian himself was in Alexandria, which was the second most important city in the Empire.

His forces, led by Marcus Antonius Primus, met Vitellius’ legions once again at Bedriacum, for the second battle there in the year.

This time, Vespasian’s forces were victorious and Vitellius returned to Rome. The walls were closing in around him. He began frantically throwing around bribes and promotions to win support. It didn’t work. The people were against him.

When Vespasian’s forces entered the city, the populace rained objects down from the windows on Vitellius’ men. According to legend, Vitellius was found hiding, brought to the Gemonian stairs which was a popular spot for executions, and killed by the mob. He was beheaded and his head paraded around the city.

The next day, December 21, Vespasian was declared emperor by the Senate.

There were no further threats to Vespasian’s rule. He remained emperor for the next 10 years and established a dynasty that would last for 27 years.  Vespasian was responsible for the construction of the Colosseum in Rome. Historians have rated him rather favorably as an emperor.

He was succeeded by his eldest son Titus, who was considered an OK emperor, and Titus was then replaced by Vespasian’s younger son Domitian, who is considered one of the worst emperors in history.

While there was always intrigue surrounding the Roman imperial throne, it wouldn’t be for another 124 years until Rome encountered another year like this. That was the year 193, known to history as the Year of the Five Emperors.

Today’s five-star review comes from listener Savio over on Apple Podcasts in Canada. They write:

“This is a fun and fantastic podcast and I have listened to every single episode since its inception. Each of them is only 7-8 minutes long and deals with a wide range of topics. A few fun facts that I learned recently: 1) even though Octo is the prefix for eight, why October is not the 10th month of the year, 2) the history and rituals for the inauguration, 3) why you can’t find McRib on the menu. I recommend this podcast to all my teacher friends because it is a great resource. And if you have an inquisitive mind, you will definitely enjoy it as well.”

Thank you very much, Savio, and thanks to all of you who have left reviews. Remember, if you leave a five-star review, you too can have your review read on the show.