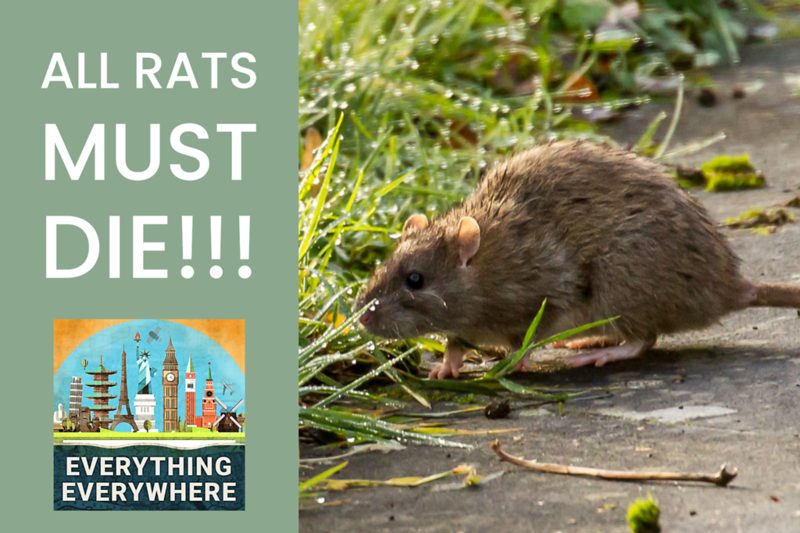 Humans and rats have lived in an uneasy relationship for millennia. Rats have spread diseases like the bubonic plague, destroyed grain harvests, and stolen our pizzas.

In return, rats have given humans……pretty much nothing.

As such, humans have waged a relentless war against rats, which for the most part has gone nowhere. However, there are some fronts where we have had amazing success.

Learn more about humanity’s war on rats on this episode of Everything Everywhere Daily.

It’s the new year and that means new year’s resolutions. If you are like most people, you might be looking to lose weight or get in shape.

Skillshare has tons of videos to help you improve yourself without leaving your house. They have dozens and dozens of workout, exercise, and fitness videos to let you get in shape without having to go to the gym.

Go to Everything-Everywhere.com/skillshare to get a free 2-Week trial of Skillshare premium.

The history of rats and humans goes back to the beginning of agriculture.

The rats which most people are familiar with are the black rat, or the ship rat, which probably came from India, and the brown rat, or the Norwegian rat, which, oddly enough, didn’t come from Norway.

Prior to the rise of agriculture, there was nothing special about the rat/human relationship. Rats were like other rodents that lived in the wild. They were opportunistic eaters and were preyed upon by larger carnivorous mammals and birds.

Rats are omnivorous, which means they can eat almost anything. Grain, fruit, meat, insects, and other rats are all on the menu.

Almost immediately, this caused problems for humans. Many early farmers had their entire crops wiped out due to infestations of rats. It is widely believed that the rat’s attraction to human settlements was one of the major reasons for the domestication of cats. As rats came for our food, the cats came for the rats….but that is a topic for another episode.

Even today, an estimated 1% of all cereal crops in the world are destroyed by rats and as much as 5% in some developing countries.

Rats were widely thought to be the transmission mechanism for the bubonic plague which was behind the Black Death and the Plague of Justinian, see my previous episode about that.

As humans spread across the globe, rats came with them every step of the way.

This was also true when humans started going on long ocean voyages. Rats would board the ship where they would survive by eating food stores, and then they would leave the ship once it arrived in port.

…and this gets to the subject of this episode.

Ships spread rats all over the world. In the old world, rats were annoying and were pests, but they didn’t overload the ecosystem.

However, many of the islands that rats wound up on had no defenses against them. They were nesting areas for numerous sea birds and had no natural predators.

Because the islands were protected and didn’t have any predators, birds would set up nests on the ground and in large numbers.

These birds, and more importantly, the bird eggs, were easy prey for rats.

Rats have done more to devastate the population of seabirds than anything else.

One island, in particular, has been hit rather hard from rats: South Georgia Island.

If you aren’t familiar with South Georgia Island, I can tell you from first hand experience that it is one of the most incredible places on Earth. Located between South American and Africa, it is a British Territory and one of the largest breeding grounds for penguins and seabirds in the world.

Well, at least it was. In the early 20th century, Norwegian whalers and sealers set up bases on the island, and with them came rats. The rats, facing no natural predators, rats destroyed the native population of albatrosses, skua, terns, and petrels.

It has been estimated that by 2010 the seabird population on South Georgia was probably 10,000,000 less than what it would be if there weren’t rats on the island.

In 2010, the British Government announced their intent to eradicate rats on South Georgia.

South Georgia Island isn’t enormous, but it would be the single largest rat eradication program in the world.

Rats reproduce rapidly. Really rapidly. A female rat can have six litters in a single year, and a rat can reach sexual maturity only 9 weeks after being born.

If you have two rats, absent any predators or food shortages, you can have half a billion rats within three years.

The good thing about South Georgia is that the center of the island is mostly covered in ice. The island is also surrounded by various peninsulas and fjords which meant that different parts of the island were separated from each other by ice. Rats can’t cross over the ice.

The plan was to cover the rat infected parts of the island with a rodenticide called Brodifacoum. The poison is an anticoagulant that causes the rats to bleed internally and die.

The poisoned laced rat pellets were methodically spread by helicopters which carried bins of pellets that spread the pellets below them. They would fly a route that was plotted via GPS to make sure that they got every square inch of the island. If they missed anything, a few rats might survive and the entire project would be for naught.

Now, if you are like me, you might be wondering if spreading all the poison around might not harm the birds? The answer is, yes, but the impact on the birds wouldn’t be nearly as bad as what it would do to the rats, and the impact would be short term. In the long term, the birds would thrive once the rats were gone, and the poison in the rat pellets would decay over time.

This technique had been tested on other islands, where the rats were eradicated and the birds all came back.

The first test was done in 2011. The next season, they laid traps to find evidence of rats and they found nothing.

In total, more than 300 tonnes of rat poison were spread over the island.

You can’t just declare victory when it comes to rats. They set traps and brought rat sniffing dogs to the island in 2016 and 2017 to check to see if any rats had returned.

In 2018, the South Georgia Heritage Trust announced that South Georgia Island was rat-free. It was the largest successful rat eradication program in history.

There has already been a very noticeable increase in the population of South Georgia Pipit, which is the only songbird in the Antarctic and sub-Antarctic region. The sound of the pipits is now said to drown out the sound of the seals.

They have instituted protocols for the ships which visit the island to make sure that no rats ever return. Ships are fumigated and are checked with rat sniffing dogs.

Other islands around the world have looked at the success of rat eradication on South Georgia and are looking to replicate their success.

Hopefully, this will be the start of removing the invasive rats which were brought to many of these islands by humans, and the return of the native birds which lived there.

I love how this podcast sheds light on little-known but fascinating things around the world all condensed into a small, bite-sized package in each episode. Each episode makes me feel like my I.Q. is going up by 5 points and leaves my brain craving for more.

Thank you very much, Sylia. At 5 IQ points per show, eventually, you should achieve a galactic level of intelligence and will be able to transcend time and space. When that happens, please remember us, little people.

Also, remember that if you leave a five-star review, you too can have your review read on the show.