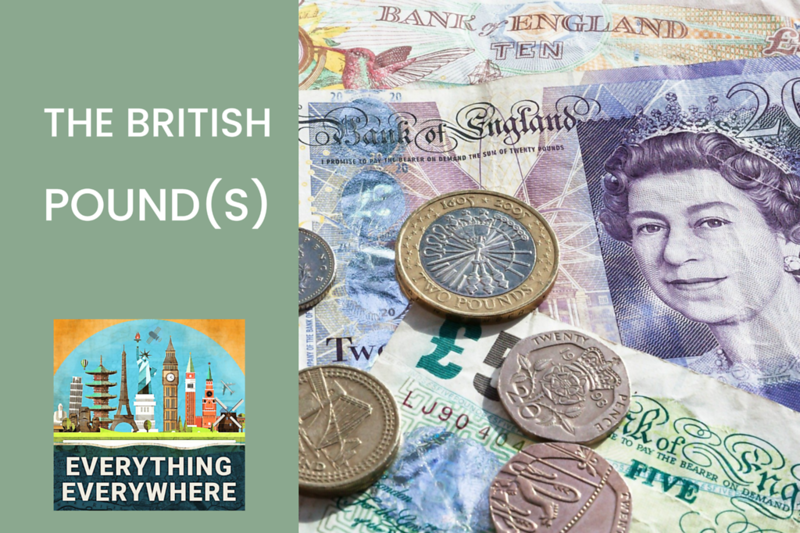 If you visit a different country you might need to get some of the local currency. You might get Ringgit in Malaysia, Pesos in Mexico, Kip in Laos, or Tala in Samoa.

Learn more about the various British Pounds on this episode of Everything Everywhere Daily.

If you are interested in money and economics, then CuriosityStream has programs for you. They have shows like “The History of Money”, “The Ascent of Money”, and also shows on the topic of if money can buy happiness.

CuriosityStream is currently running a special where you can get a full year for 40% off, or only $11.99. That’s only $1 a month for some of the best educational programs.

If you love to learn, and you probably do if you are listening to this podcast, then start your subscription by visiting Everything-Everywhere.com/CuriosityStream or click on the link in the show notes.

The genesis of this episode was an experience I had back in 2011.

I was traveling around the British Isles. I had just been to Northern Ireland and I was on the Isle of Man where I had spent the last few days.

I was going to fly to Glasgow the next day, so before I left I went to an ATM machine to take out £200 to cover me for the next two weeks.

As the money came out of the machine, I put it in my wallet and never bothered to look at it.

A few days later in Glasgow, I went to a theater to see a movie and I took out a £20 note to pay for my ticket.

After I handed it to the woman at the ticket window she said, “Sir, we can’t accept this.”

It wasn’t a normal pound note that I was familiar with. It was an Isle of Man pound note, which, unbeknownst to me, was totally different from the notes I’ve seen around London.

This transaction was my introduction down the rabbit hole of British banknotes.

In this discussion, there will be a whole bunch of subtle distinctions that are required, that you never really had to think about before unless you live in the UK.

For starters, I should note that the United Kingdom only has one currency. The British Pound, also known as the Pound Sterling, is the currency for the country.

As you can probably guess from the name, the Pound Sterling used to be the measure of a pound of sterling silver. The pound symbol, which is a gothic letter “L” comes from the Latin word “Libra” which was a Roman unit of weight, which was later converted into an English pound.

Fast forward several centuries, England merges with Scotland and Northern Ireland, and the United Kingdom keeps the term pound sterling as the name of their currency, even though it has nothing to do with weights or silver.

As money moved from precious metal coins to paper, banks began issuing their own paper money which had the equivalent amount of hard currency in reserve back at the bank.

Both in the UK and in the United States and other countries, private banks often issued their own banknotes.

In 1844 Britain passed the Bank Charter Act which put limits on the ability of banks to issue notes.

Over time, as banks merged to form larger banks, they lost the right to print notes.

Today, the only bank which can issue banknotes in England and Wales is the Bank of England, which is the central bank for the government of the United Kingdom.

The last private bank to issue notes in England was Fox, Fowler, and Company which ended note production in 1921.

However, in Scotland and Northern Ireland, there are still banks that can produce their own pound notes.

In Scotland, three banks have the right to issue pound denominated banknotes.

In Northern Ireland, four banks have the ability to print notes. The Bank of Ireland, Danske Bank, and Ulster Bank. First Trust Bank ceased issuing notes in June 2020 but they will be in legal circulation until June 2022.

So, you have notes from eight different banks floating around the UK for what is, in theory, the exact same thing: British Pounds Sterling.

Here is where you now have to get into the weeds about something which you pretty much never have to worry about unless you live in the UK: Legal Tender.

In most of the world, whatever the currency is, is legal tender in that country.

Here, I’ll just use the definition from the Bank of England website. They say, “Legal tender has a narrow technical meaning which has no use in everyday life. It means that if you offer to fully pay off a debt to someone in legal tender, they can’t sue you for failing to repay.”

So, all of the notes I just listed above are legal currency for British Pound Sterling, but they are not necessarily legal tender all over the UK. That means, no one has to accept it if they don’t want to.

In particular, in England and Wales, legal tender consists of Bank of England notes, and coins from the Royal Mint.

If this sounds a bit nuts…..it is.

That being said, most everyone in the UK will accept Bank of England notes, and most people in Scotland and Northern Ireland will accept notes from banks from their countries.

Most chain stores will also accept any pound notes. It all gets deposited in the bank and gets sorted out there.

However, if you duck into a pub in England and try to pay with a Scottish pound note, it might not be accepted.

If this is all confusing, it gets worse.

As I mentioned at the top, my story started on the Isle of Man. The Isle of Man is not part of the United Kingdom. They are a crown colony. They are in a unilateral currency union with the UK, which means all of the Manx pounds have the same value as British Pounds Sterling and are backed up by Pounds Sterling, but they are not legal currency in the UK.

Likewise, the other crown colonies, Jersey and Guernsey, have their own pounds. The British territories of Gibraltar, St. Helena, and the Falkland Islands also all issue their own pound notes, which have the same value as Bank of England notes, but are not legal currency outside of their territory.

So, what to do if you have pound notes from one jurisdiction and you are in another? Any bank in the UK will accept and convert any pound notes you bring in. That is how I got rid of most of my Isle of Man pound notes when I was in Scotland. It wasn’t a problem and there was no transaction fee.

But, if you do have some odd pound notes and want to have some fun, find a small pub in England and try to pay with them. Just make sure to also have some Bank of England notes with you or else you might get a very hard lesson in the meaning of Legal Tender.