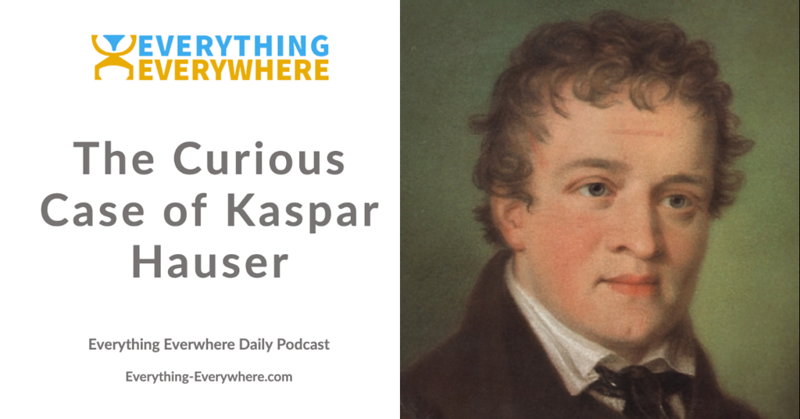 On May 28, 1828, a 16-year-old boy mysteriously appeared in Nuremberg, Bavaria. He had a letter in his hand and could only speak a few words. No one knew where he came from, who his parents were, or why he was there.

Five years later, just as mysteriously as he appeared, he was found murdered.

His tale made him one of the most talked-about celebrities in 19th century Europe.

Learn more about the curious case of Kaspar Hauser on this episode of Everything Everywhere Daily.

The tale of Kaspar Hauser begins in Bavaria in the early 19th century. A boy appeared on the streets of Nuremberg, the second-largest city in the kingdom, with a glazed look on his face holding an envelope.

He is only able to say a few words. In particular, he keeps repeating the following phrase: “I want to be a cavalryman, as my father was”

In the envelope he was holding, there were two anonymous letters. The first letter was written by someone who claimed that he found the boy at his doorstep on October 7, 1812, and that he was kept in his home the entire time and was never allowed to leave. The letter suggested that the boy should become a cavalryman, or if not, “…if he isn’t good for anything [the captain] must either kill him or hang him in the chimney.”

The second letter, written in the same hand, claimed to be from his mother and said that his father was a cavalryman in the 6th regiment and had died.

When the police began to guide his hand to make an X on the police report, the boy was able to write a name, “Kaspar Hauser”.

Thus began one of the most mysterious episodes of the entire 19th century.

Kaspar seemed to have no sense of how to behave in a civilized society. He preferred to eat bread and water over meat and vegetables. He couldn’t speak more than a few words. He could say a few prayers, but it wasn’t sure he knew what they meant. The bottoms of his feet were smooth like a baby who hadn’t grown accustomed to walking.

The police didn’t know what to do with him, so he was arrested for vagrancy and was placed in jail.

In jail, he exhibited even more odd traits. He had a difficult time reacting to most sensory experiences like the smell of cooked food. When shown a mirror, he was very confused as to what was happening or how it worked. He looked for the person in the mirror but couldn’t find them.

Eventually, his jailer, Andreas Hiltel, took him home to live with his family. There he would play with his son, who taught him how to speak. He also received many visitors who wanted to see him, including the Nuremberg mayor, Burgermeister Binder, who came by almost every day. He also had frequent visits from a local school teacher named Friedrich Daumer.

While his language abilities were still improving, over several weeks the Mayor was able to piece together his story of where he came from.

This is where the story gets weirder.

The commonly held belief that Kaspar was raised in the wild was wrong. Kaspar told him that he had spent his entire life in a small cell, only occasionally taken out to be washed and to have his hair and nails cut. This was done while he was drugged and unconscious. He was fed nothing more than bread and water for most of his life. During most of his imprisonment, he never saw a single person.

After two months, he went to live with the teacher who visited him, Herr Daumer. He found an advocate in a local attorney, Paul Johann Anselm Ritter von Feuerbach,, who worked on his behalf. He was eventually adopted by the entire community of Nuremberg who donated money for his support and education.

Kaspar was a quick learner. He took to drawing and learned how to read.

During this time, he became a cause celebre. Newspapers all over Europe began reporting on him, and he became the hottest subject among both the common folk and the aristocracy.

Not surprisingly, rumors began to circulate about his origin. The most popular rumor was that he was the Crown Prince of The Grand Duchy of Baden, but there were also rumors of him being a member of the royal houses of Hungary and England.

On October 17, 1829, he was found bleeding with a wound to his head. He claimed that the man who brought him to Nuremberg had done it, leading to more public speculation about his royal origins. However, skeptics said it was his way of getting out of an argument with Herr Daumer, who had found him telling repeated lies.

After the incident, he was transferred to the care of Johann Biberbach, who was a local magistrate. In April of the next year, there was an incident where he was found with a gunshot wound to his head, which he claimed happened after an accident where a gun on the wall fell. Here too, his relationship with Biberbach went south after he was accused of more lies.

In May he was then transferred to the home of Baron von Tucher. (Notice he is working his way up the social ladder with every move). Here too, his relationship soured for the exact same reasons as before.

In 1831, a British aristocrat named Lord Stanhope, who had developed an obsession with the case, took custody of him. He spent a significant amount of money trying to figure out where he came from. This included trips to Hungary and meetings with Hungarian royals to see if it would jog his memory.

He promised to take Kaspar with him back to England, but that promise was never fulfilled.

On December 14, 1833, Kaspar stumbled home with a deep knife wound in his chest. He said he was lured there by a stranger who gave him a bag with a note and then stabbed him. The note read:

The note was written backward so it was legible in a mirror.

After his death, most of his benefactors came out against him.

Lord Stanhope published a book with all the known evidence about Kaspar, concluding that  it was “(his) duty openly to confess that I had been deceived.”

Likewise, the attorney Feuerbach who defended him wrote, “Caspar Hauser is a smart scheming codger, a rogue, a good-for-nothing that ought to be killed.”

Controversy and speculation about his origin didn’t end with his death. For decades after, there were articles and books being written about Kaspar Hauser.

The consensus which developed over time was that Kaspar was a fraud and that the entire thing was a hoax. There were too many inconsistencies in his story. If he really was raised as he claimed, he wouldn’t have survived childhood, nor would he have been able to learn to read and speak so quickly.

The belief was that his murder was just an attempt at attention which went wrong when he stabbed himself too deep.

In 1996, the German magazine Der Spiegel did a DNA test on a blood sample that came from an item of his clothing. From this, they concluded that there was no way he could have come from the royal line of the House of Baden.

Over time Kaspar Hauser became the subject of many dozens of artistic works, mostly in Germany, including poems, books, songs, plays, movies, and graphic novels. He was also used as the basis for characters in many other fictional works as well.

He has been referenced in clinical psychology where there is a “Kaspar Hauser syndrome”, and a “Kaspar Hauser” experiment where you raise an offspring away from members of its own species.

Kaspar was buried in Ansbach. His tombstone reads, “Here lies Kaspar Hauser, a riddle of his time. His birth was unknown, his death mysterious.”

Executive Producer of Everything Everywhere Daily is James Makkala.

Today’s listener review comes from Jidhat in the United States They write:

Thank you very much Jidhat, and thanks to all of you who listen.

Remember, if you leave a five-star review over on Apple Podcasts, I’ll read your review on the air.