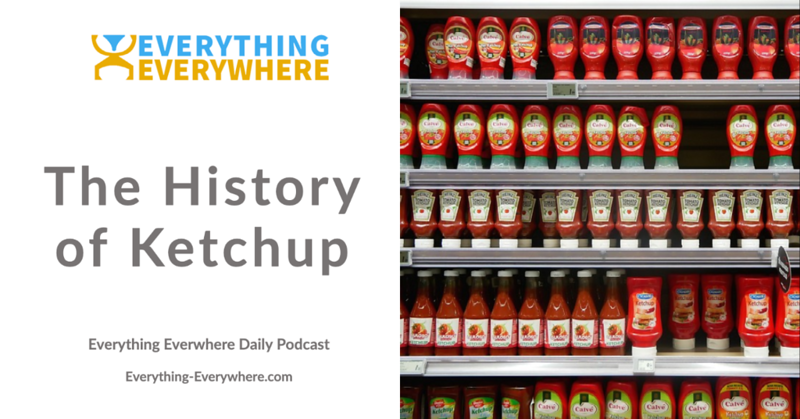 It the one of the world’s most commonly used condiments. Even though it is most often associated with the United States, it has a pedigree that is extremely ancient and global.

I am of course talking about ketchup.

Learn more about this common condiment, and its extremely ancient and interesting history, on this episode of Everything Everywhere Daily.

I talk often about how Scottevet clothes are perfect for carrying your electronics, and that’s true. However, you can use your Scottevest gear for carrying so much more.

If you want to sneak in candy to a movie theater, or your own bottle of hot sauce or sriracha to a restaurant, a Scottevest jacket will help you on your clandestine food mission.

Before I start, I should note that what you call ketchup should really be called “tomato ketchup”.  I mention this because modern ketchup has become so associated with a tomato-based product, and most people assume that that is what ketchup is.

This is important because the story of ketchup starts in Southeast Asia with fish sauce.

Fish sauce goes way back in Asia. The origin of it isn’t totally known, but there are theories that it might have come from Chinese soy sauces, or that it might have actually come from the Mediterranean, where the Ancient Romans were known to make a fish sauce very similar to what is made in places like Vietnam today. If true, it could make it one of the few innovations which went from west to east in the ancient world.

That debate, however, is literally a whole other kettle of fish and isn’t really relevant to the subject at hand. Ketchup.

The fish sauce in Asia spread around the region. When British sailors arrived in the 17th century, they came across this fish sauce that the Chinese called “ke-tichap”. It livened up their otherwise mundane diet of hardtack and pork.

British sailors, who wanted this sauce back home, attempted to recreate the recipes they had come to enjoy when they were in Asia.  They also anglicized the word and it became called ‘catchup’, spelled with a ‘c’ and later morphed into ‘ketchup’ with a ‘k’.

These British ketchups would often have different bases, including anchovies, oysters, walnuts, mushrooms, and other foods. They did not look or taste like what we think of as ketchup today. They would have been much closer to modern Worcestershire sauce, which has an anchovy base and isn’t nearly as thick.

Mushrooms became the preferred ingredient for the sauce over time and eventually, ketchup became known as a mushroom-based sauce as much as it is considered a tomato-based sauce today.

It was this mushroom-based sauce that was brought over to the United States in the 18th century. We know as early as 1770 there were recipes published in the colonies for mushroom ketchup and for walnut ketchup.

It is here we need to start talking about the tomato.

Tomatoes weren’t always a popular food, especially in early America. Tomatoes are members of the nightshade family, and because nightshade is poisonous, many people assumed the same of tomatoes.

In fact, the first use of tomatoes when they were brought to Europe from South America, wasn’t as a food, but as an ornamental plant for gardens. Tomatoes eventually were popularized in southern Europe before gaining in popularity in England.

While there were recipes for ketchup in the 18th century which used tomatoes as an ingredient, tomato-based ketchup really hit its groove in America.

There are various dates listed for the first American tomato ketchup recipe. I’ve seen 1801, 1812, and 1817 all given. What all of these recipes had in common was that they would often still have fish in the recipe, and they lacked the key ingredients of modern ketchup.

The early tomato ketchups also had a serious problem with shelf life. Whereas the mushroom and fish ketchups would often have a long shelf life, tomato ketchups didn’t and usually had to be consumed quickly after it was made. This was also an issue because the harvest window for tomatoes was quite narrow, lasting only about two months in August and September.

In 1837, ketchup took its next big step when a man named Jonas Yerkes, bottled and nationally distributed the first manufactured ketchup. It was one of the first prepackage food products of its type that people could buy.  It was still called ‘catsup’ with a ‘c’ at this time.

The development of a type of ketchup that we would recognize today came in 1876 when Henry J. Heinz introduced their ketchup.

They had several innovations that changed ketchup forever.

First, they changed the spelling to the British ‘k’ spelling of ketchup.

Second, they removed the word “tomato” from “tomato ketchup” and just called it ketchup.

Finally, they added vinegar and sugar to the recipe which gave the product a unique taste, and also extended the shelf life.

The product which they created is one of the few foods on Earth which has a balance of all five tastes: sweet, from the sugar, salty, from salt, sour, from vinegar, bitter, from spices, and savory, from the tomatoes. It is for this reason that some scientists have dubbed ketchup the “perfect food” because it can satisfy all your tastebuds.

This ketchup could also sit on a shelf for a year, which meant a great deal in the late 19th century when refrigeration hadn’t yet been invented.

With the success of the manufactured ketchup, recipes for ketchup started disappearing from cookbooks. It was far easier to purchase than it was to cook yourself. In fact, this was the entire initial selling point of the product. Its first slogan was, “Blessed relief for Mother and the other women in the household!”

Going into the 20th century, sales of ketchup kept growing. Heinz was selling over 5 million bottles a year near the turn of the century, and they had a near-monopoly on ketchup.

Ketchup consumption began to drive tomato horticulture. New breeds of tomato were developed specifically for use in ketchup.

You can still find non-Heinz ketchup sold at stores, and you might still even find a few brands that use catsup spelled with a ‘c’. Del Monte, one of the biggest competitors to Heinz, kept the ‘c’ spelling until 1988.

Ketchup is what is known as a democratic food, as in, you can’t really get a better version of it if you spent more money.  Coke is another example of a democratic food. Billionaires and President can’t buy a better Coke than the version which everyone can buy.

You can find artisanal mustards and other condiments, but you don’t see too many artisanal ketchups. They exist, but they aren’t very popular or necessarily better.

While the United States is most associated with ketchup, they aren’t even the top consumer of ketchup in the world. Ahead of the US in per capita ketchup consumption are Canada, Finland, Sweden, UK, Norway, and Austria.

95% of American households claim to have a bottle of ketchup at hand in the house.

If you have ever seen “Fancy Ketchup” on a label, that has a very specific meaning. It refers to the specific gravity of the product, which similar to density. “Fancy” ketchup has the highest specific gravity, meaning it will be thicker. Below ‘Fancy’ are grades of “extra standard” and “standard”.

You can use ketchup on beef, but usually never on chicken. Most people would never put ketchup on spaghetti, but then again some people in other countries do.

In countries like Australia, you will see ‘tomato sauce’ at the table and at restaurants. It looks like ketchup, but any ketchup connoisseur will tell immediately it is not ketchup.

So the next time you squeeze or pound the bottom of a bottle of ketchup, give a second to appreciate this perfectly balanced, democratic food, with ancient and global origins.