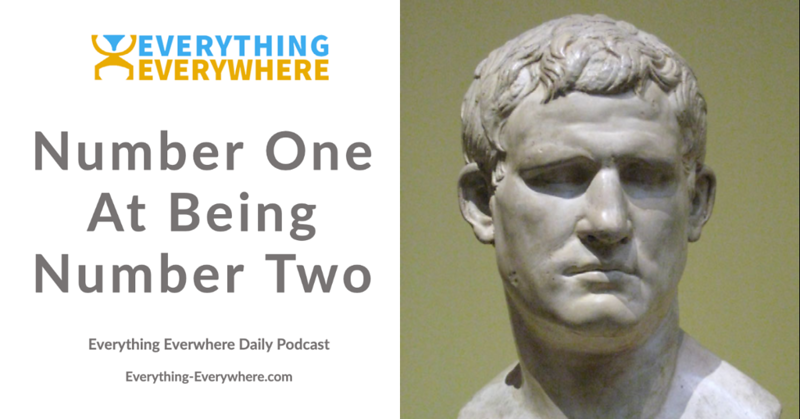 History remembers the rulers and the leaders. We know of Napoleon, Caesar, Elizabeth, Ghengis Khan, and Captain Picard.

However, for every one of the people I just listed, their success was due in large part to the people who worked underneath them. The ones who carried out their orders and made sure things got done. They had to have a competent number two.

In this episode, I will put forward that the greatest number two in history was Marcus Vipsanius Agrippa.

Learn more about the person who was number one at being number two on this episode of Everything Everywhere Daily.

The audiobook I’d recommend for today’s show is Augustus: First Emperor of Rome by Adrian Goldsworthy.

You can’t tell the story of Marcus Agrippa without knowing the story of Rome’s first, greatest, and longest-serving emperor, Augustus. Friends since they were boys, they grew up together, rose in power together, and helped shape the greatest Empire that Europe has ever seen.

Agrippa’s origin story is very unlikely for a successful Roman. He wasn’t from Rome and his family wasn’t in the nobility.

He was born around 62 to 64 BC somewhere out in the provinces, but we aren’t sure exactly where. Some scholars think he may have come from the region around what is today Pisa, Italy.

His family was well off having reached the rank of equestrian, which was just below that of a senator.

He served with Julius Caesar as a very young man in the civil war against Pompey and he performed well enough that Caesar sent him to study with his great-nephew Octavian at an academy in Appolonia, in what is today Albania.

After only four months at the academy, both his and Octavian’s world changed forever.  They set out to meet Roman legions in Macedonia. On the way, they received the news that Agrippa’s benefactor and Octavian’s uncle had been assassinated in Rome.

The two boys were only about 17 or 18 years old at the time. Still too young to begin a public life and to start the climb up the Cursus Honorum, refer back to my previous episode about that.

Rather than march on Rome with the Macedonian legions, Octavian took Agrippa and their friend Rufus and went to Rome in a small group.

When they arrived, they received more shocking news. Octavian had been posthumously adopted by Julius Caesar in his will and was given the vast majority of his fortune.

Agrippa’s friend, with the stroke of a pen, just became the Roman equivalent of Richie Rich.

Octavian wasn’t going to sit back and hang out in a villa. He was going to jump headfirst into the political whirlpool which was Roman politics after the death of Julius Caesar.

Here is where their partnership took off.

Octavian knew he needed to raise troops to be taken seriously. He sent Agrippa south to convince Caesar’s legions to follow Octavian, which he successfully did.

When Octavian legally prosecuted the plotters in the assassination of Caesar, the role of lead prosecutor against the ringleader Cassius Longinus was given to Agrippa.

Octavian needed to make sure that none of his laws would be vetoed, so he got Agrippa elected to Tribune of the Plebs, which also granted him membership to the Senate.

He was a military commander when Octavian fought Marc Antony, and later helped negotiate the truce between them at Brundisium.

While still in his early 20s, he was named Governor of Transalpine Gaul, today’s France, where he put down a revolt and also fought German tribes, becoming the second Roman general after Caesar to cross the Rhine River.

When called back to Rome, he refused a triumph, a grand victory parade, because he didn’t want to take any credit or attention away from Octavian.

During the Second Triumvirate, he was appointed consul before the age of 30, circumventing every tradition and rule about the office.

Agrippa was assigned the task of ridding the pirates led by Pompey’s son Sextus, who controlled Sicily and were stopping all shipments of grain from Egypt.

What did this man who had zero experience in naval warfare do?

He constructed a hidden harbor in a lake near Naples, which he named Portus Julius, after Octavian, who was going by the name Julius Caesar after his adoption. Agrippa created a fleet of ships with many technical improvements, he developed a new grappling hook that could be used in combat. He trained all of his men in both naval and land combat.

After a setback due to weather, he finally met Sextus in combat and demolished his fleet at the battle of Naulochus. Sextus fleet went from 300 ships to only 17.

After the defeat of Sextus, grain prices plummeted in Rome, and Octavian’s popularity skyrocketed.

Octavius granted Agrippa the Naval Crown. An award never given before, or after.

After becoming a military hero in Gaul and at sea, he turned to the rather pedestrian role of water commissioner in Rome. He repaired aqueducts and Rome’s water system. He was elected Aedile, a highly unusual move for a former consul to take a lower position. When aedile he also set about fixing the roads and putting on games for the citizenry. He cleaned out the main sewer in Rome, the Cloaca Maxima and set up baths for the populace.

Augustus reportedly said that “found Rome a city of brick and left it a city of marble”. Much of that construction was done by Agrippa.

Perhaps his most noteworthy achievement occurred in one of the final battles between Octavian and Marc Antony. At the Battle of Actium, he commanded Octavian’s forces in a naval battle, which basically destroyed Marc Antony as a military threat. His fleet either captured or destroyed almost every ship that Antony controlled.

After the end of the civil war, Octavian was the sole ruler of Rome. Agrippa served two more terms as consul. Octavian was given the name Augustus, and they worked to stabilize the empire and solidify Augustus’ rule.

One of the highlights of Augustus’ reign was the return of the legionary standards lost to the Parthians, from what is modern-day Iran, when they defeated Crassus years before.

It is believed that when Agrippa supposedly went into exile to become governor of Syria, he was really there to negotiate the return of the standards. Given the importance that Augustus put on the mission, it is not surprising that he gave the assignment to Agrippa.

He put down revolts in Spain and along the Black Sea. He visited Judea where he met and became friends with King Herod. Herod respected him so much that he named his son Herod Agrippa.

He conducted a survey of the entire empire, which was eventually made into a marble map on the floor of one of the buildings in Rome. He established the measurements of the Roman foot and the Roman Mile.

He even wrote a biography and a treatise on Geography, which sadly have been lost over time.

Agrippa was eventually given powers almost to the equivalent of Augustus himself. He was awarded what was called “proconsular imperium”, which was a wide-ranging authority and immunity from prosecution, and also “tribunicia potestas”, which meant that his body was held sacrosanct.

Eventually, Agrippa was made a member of the family. His third wife was  Augustus’ daughter, Julia with whom he had several children.

In 23 BC, Augustus was ill and it was thought he was going to die. The only other person who could keep his empire together was Agrippa. He gave his signet ring to Agrippa in case he was to pass away, as a symbol of transferring power.

Agrippa did not survive Augustus. As it turned out, Augustus would live a long life, and Agrippa would die in his early 50s, on campaign trying to subdue the area around the upper Danube River.

Probably the best-preserved Roman building in the world is the Pantheon in Rome. It was originally built by Agrippa on the anniversary of the victory at the Battle of Actium.

If you visit it, you’ll see written in large letters on the facade the following:

Once you translate the Latin and the abbreviations (and the Romans loved to use abbreviations), it reads “Marcus Agrippa, son of Lucius, built this when he was consul for the third time.”

Even though rebuilt and renovated by subsequent emperors, the name Agrippa remained the most prominent one on the building.

As you look back, Agrippa’s career was really amazing. He was an incredible general, diplomat, civil engineer, geographer, and leader. At no point is there any evidence that Agrippa suffered any jealousy towards Augustus or that he ever tried to usurp him or take control.

If Augustus is the greatest emperor in Rome’s history, it is only because he had the best number two by his side.

Executive Producer of Everything Everywhere Daily is James Makkala.

Today’s listener review comes from None12321 in Canada. They write:

Gary has always been a great inspiration for travellers over the years, and his new podcast is equally inspiring for the curious. His ability to come up with such a wide range of unique and fascinating stories never ceases to amaze me.

Thank you very much None12321, and thanks to all of you who listen.

Remember, if you leave a five-star review over on Apple Podcasts, I’ll read your review on the air.