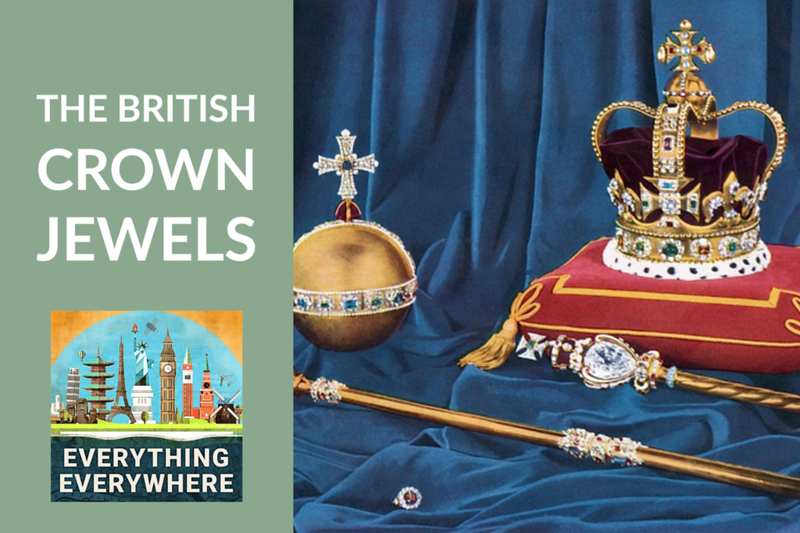 Located in the Tower of London are a collection of objects, some of which date back 800 years, which are the physical symbols of the British Monarchy.

These objects have a value that would almost be impossible to measure given both their intrinsic and historical worth.

Learn more about the British Crown Jewels and their role in the British monarchy on this episode of Everything Everywhere Daily.

The phrase “the crown jewels” has become a euphemism for anything which has central importance. For example, the secret seven herbs and spices are the crown jewels of the KFC empire.

However, the origin of the phrase lies in a collection of actual ceremonial objects which are used by the British Monarchy.

Officially, they are known as the coronation regalia, and their primary use is for the investiture of a new monarch during a coronation ceremony.

The crown jewels are owned by The Crown. That is to say they are owned by the institution known as The Crown, and not personally by the monarch.

Upon a transition of the monarchy, they are automatically by law transferred to the new monarch, and they are not something that can be transferred personally in the monarch’s will as personal property.

So, they are technically owned by The Queen, and not by Elizabeth Windsor.

There are currently 142 items that make up the crown jewels. The collection includes a large number of things that you wouldn’t normally associate with being crown jewels.

Most of the pieces in the collection are rather recent, historically speaking.

When King Charles I was beheaded by the forces of Oliver Cromwell at the end of the English Civil War, almost all of the crown jewels were either melted down or sold.

Only 4 of the 142 items in the current collection predate the restoration of the monarchy in 1660. Three swords and the oldest item in the collection, the anointing spoon which dates back to the 12th century. It was sold off like the other items in the royal collection, but it was given back to the crown when it was restored.

The spoon is used in the coronation ceremony during the anointing of the monarch. Holy Oil is poured onto the spoon which is then used to anoint the monarch’s hands, breast and head.

While there are many items in the crown jewels, there are a few which are considered the highlights of the collection.

The centerpiece of the crown jewels is St Edward’s Crown.

There are actually several different crowns that have been used for the coronations of various monarchs, all of which are part of the crown jewels.

St. Edward’s Crown is named after St. Edward the Confessor, a King of England. The original crown was destroyed after the execution of Charles I and the current crown was recreated for Charles II after the restoration in 1661.

The crown is 12 inches tall and weighs five pounds, and it is made of solid gold. There are four arches at the top with a purple velvet cloth under the arches and is adorned with 444 precious stones.

Not every monarch has used the crown during their coronation ceremony. The only monarchs who have used the crown are Charles II, James II, William III, George V, George VI, and Elizabeth II.

The St. Edward’s Crown is usually only used during the coronation itself, which means it was last used in 1953. However, it is the crown that is used on the monogram for Queen Elizabeth. She has actually only worn it for a few moments during her entire reign given its weight.

The crown used by the monarch after the coronation is called the Imperial State Crown. It was created in 1937 and is slightly smaller and lighter than the St. Edward’s Crown.

This is the crown that is traditionally worn by the monarch during the opening of parliament.

The crown has a whopping 2,901 precious stones including the literal crown jewel: the Cullinan II diamond which is 317.4 carats or 63.48 grams. More on the Cullinan diamond in a moment. It also has such noteworthy gems as the St Edward’s Sapphire, the Stuart Sapphire, and the Black Prince’s Ruby.

The Queen actually ceased wearing the crow in 2016 as she was getting advanced in age and found it difficult to wear it. Today the crown is just held next to her on a podium when she reads her speech to parliament.

In a 2013 interview, she told the BBC, “You can’t look down to read the speech, you have to take the speech up. Because if you did your neck would break, it would fall off. So there are some disadvantages to crowns, but otherwise, they’re quite important things.”

There are several other crowns in the collection which were used in the past, but haven’t been used in decades or centuries. Some of them, like the crown, made for Queen Elizabeth’s mother, also Queen Elizabeth, had a crown made with the incredible Mountain of Light diamond from India.

There are other objects which are major parts of the coronation.

There are jewel-encrusted swords that are used in the procession. Specifically, there are three: the Sword of Offering, the Sword of State, and the Sword of Mercy. The swords represent the monarch’s role over the military, country, and the Church of England.

The Sovereign’s Orb is a golden jewel-encrusted ball with a cross on the top which is held in the monarch’s left hand during the coronation. The orb weighs 1.07 kg or 2.4 pounds.

In the monarch’s other hand is held the scepter. There are six scepters in the collection, but the main one which is used during the ceremony is called the Sovereign’s Sceptre with Cross.

The Cullinan I in the scepter and the Cullinan II in the Imperial State Crown are two of the gems cut from the original Cullinan Diamond.

Discovered in 1905 in South Africa, it was the largest rough diamond ever found. The original uncut diamond weighed 3,106.75 carats.

Seven other major cut diamonds came from the original Cullinan Diamond, all of which are in the personal possession of the Queen.

The Crown Jewels are permanently stored in the Tower of London. They are under constant watch by the Tower Guard. In addition to their ceremonial duties at the tower, they are all also active-duty military personnel and actively guard the collection.

Within the tower of London the jewels are on public display in the Jewel Vault. They are encased in bulletproof glass and in a facility that is designed to process over 25,000 tourists per day.

It is estimated that over 30,000,000 people have personally seen the Crown Jewels, making them perhaps the most personally observed objects in the world.

The Crown Jeweller is a member of the Royal Household. He is responsible for cleaning the collection every January. He is one of only three people who are allowed to touch them other than the monarch and the Archbishop of Canterbury. Those people have to touch them as they are a part of the coronation ceremony.

The big question most people have is how much are the crown jewels worth?

Technically speaking, the value jewels are priceless. They have never been appraised and they are not insured. In fact, it would probably be impossible to get insurance for objects like these.

The value of the Cullinan I diamond itself is estimated to be around $400 million dollars. The entire collection has had estimates placed on it of £3 to £5 billion pounds.

Today, you can see the crown jewels yourself at the Tower of London. It is open almost every day of the week. There are a limited number of people who can see the Crown Jewels every day, so much sure to buy tickets in advance.

If there should be a coronation ceremony at some point in the future, keep an eye out for the objects I mentioned in this episode. It will be the first time most of them have actually been used in over 70 years.