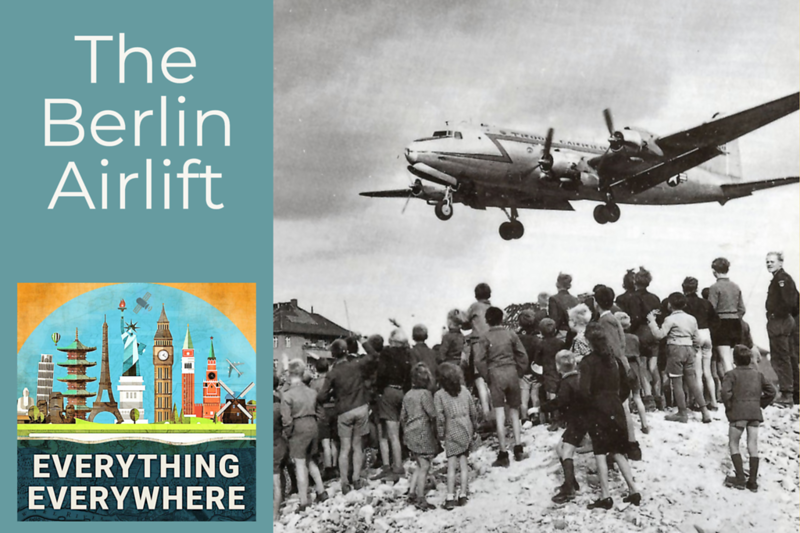 On June 24, 1948, the Soviet Union placed a blockade on Berlin’s American, British, and French-occupied zones.

No food, fuel, or supplies could enter the area known as West Berlin.

Many people thought that either the allies would have to capitulate or engage in an armed conflict. However, the Americans and British eventually figured out another way around the blockade.

Learn more about the Berlin Airlift and how it shaped post-war Europe on this episode of Everything Everywhere Daily.

To understand why the Berlin Airlift happened, we have to turn the clock back several years to understand what was happening in post-war Germany.

As the war was nearing its end, the Allied leaders met in the town of Yalta in the Crimean Peninsula to plan what the post-war order was going to look like.

The primary thing that the powers agreed on was that German would be divided among the Allies. Each country would be given a zone that they would control, and the Americans and British would each give part of their zone to the French.

In addition to dividing up German, Berlin itself would be divided among the four powers into zones of control.

Likewise, Austria was divided into four zones, as was its capital, Vienna.

The one thing that all the allies could agree on was that after two world wars, Germany couldn’t be allowed to become a military power again.

At the Potsdam Conference in August of 1945, after the war, further agreements about Germany’s future were made. The SA, the SS, the Gestapo, the German Army, the Navy, and every other institution that existed in Germany were disbanded, and all Nazi laws were nullified.

For example, the United States Secretary of the Treasury, ?Henry Morgenthau, proposed a plan whereby Germany would be totally deindustrialized and revert back to an agrarian society.

When Germany was finally divided up, Berlin lay entirely within the Soviet zone of Germany.

The four powers created a board known as the Allied Control Authority, which was responsible for the administration of Germany. They functioned as both an executive and a legislature, with each allied power managing affairs in their respective zones.

Most importantly, all four members had to act unanimously for the Control Authority to take action.

Pretty quickly, rifts began to develop between the Soviets and the other three countries.

One of the things which the allies agreed to in Yalta was that there would be democratic elections in Germany. In October 1946, elections were held for the Berlin City Council. These were the only Berlin-wide elections held between the end of the war and the reunification of Germany.

Voter turnout was exceptionally high at 92.3%, and it did not go well for the party backed by the Soviets.

On top of that, the Americans, British, and French had very different ideas for the future of Germany. The western allies eventually concluded that they needed a stronger Germany which could take part in rebuilding and defending Europe.

Moreover, they feared that if Germany unified as a neutral country, it would eventually fall under Soviet domination.

The Soviets didn’t want to see a unified Germany for defensive reasons. They saw it as a threat when the Americans and British merged their zones on January 1, 1947. The new zone was known as the Bizone.

The Americans and the British spent 1947 and the first part of 1948 preparing for the launch of a new currency. The German economy was in shambles, the old Reichsmark was near worthless, and black markets were running the country.

In 1948, relations between the soveis and the western allies deteriorated rapidly.

The western allies held two conferences in London about the future of Germany, which the Soviets did not attend.

On March 20th, the Soviets walked out of an Allied Control Council meeting and never returned.

On March 25, the Soviets ordered restrictions on passenger rail travel and then announced that all cargo transportation going in or out of Berlin was to be searched by Soviet troops.

Throughout April, transportation was harassed to and from Berlin and ushered in what became known as the Little Air Lift. 20 flights a day began to fly food and supplies into Berlin.

The Americans and British also introduced a new currency called the Deutsche Mark on June 18th, which the Soviets forbid to be used in their zone.

The next day, all autobahn traffic to Berlin from the west was halted by Soviet troops, as well as passenger rail traffic.

On June 21, the Deutsche Mark was introduced, and on June 22, the Soviets announced the East German Mark.

Also, on June 22, the sent a message to the British and Americans stating, “We are warning both you and the population of Berlin that we shall apply economic and administrative sanctions that will lead to the circulation in Berlin exclusively of the currency of the Soviet occupation zone.”

On June 24, all rail, road, and river connections to West Berlin were blocked.

On June 25, food shipments to West Berlin were halted, and electricity was cut off as well.

West Berlin was effectively cut off from the rest of the world.

The western allies, which I will just refer to as the allies from now on, didn’t have any legal agreement for land transportation through the Soviet Zone to get to West Berlin. They just relied on their goodwill.

The action took the Americans by surprise.  Some generals felt that this was a casus belli and a reason to go to war. However, at this point, no one wanted another major war, having just finished a second world war, not to mention that there was now a risk of atomic weapons being used.

At the same time, President Truman insisted that they could not lose control of West Berlin. If they lost Berlin, they would lose Germany; if they lost Germany, they could lose all of Western Europe.

The Americans and British quickly realized that the only solution was to bring supplies to West Berlin by air.

On June 25, the Americans and British launched Operation Vittles.

Post-war agreements allowed the allies three air corridors to West Berlin. A northern route from the cities of Hamburg and Bremen, a central route from Hanover, Düsseldorf, and Cologne, and a southern route from Frankfurt, Stuttgart, and Munich.

The Americans were flying into Templehof Airport, and the British flew in to RAF Base Gatow.

The French built a new airport in their sector called Tegel Airport.

They also implemented a counter blockade on all supplies going into East Germany.

The aircraft which were used were primarily C-54 and C-47 cargo aircraft.

It took a few weeks to get a system in place to really start delivering supplies.

In the first week, only 90 tons a day were delivered. However, more aircraft were quickly brought into service, and an organized system was developed to move planes and supplies.

In the second week, 1,000 tons a day were being delivered.

A system was created whereby a plane would take off every four minutes, and each plane would fly 1,000 feet higher than the plane in front of it, every five planes. This was known as the ladder.

Within two months, there were 5,000 tons of supplies being flown into West Berlin on 1,500 flights a day.

Here I need to express just how inefficient transportation by air is compared to transporting by rail or barge. Especially when you are dealing with a bulk product like coal.  The cost of shipping a ton of anything by air is vastly more costly than shipping it almost any other way.

The Soviets initially mocked the airlift, saying it was jus, “the futile attempts of the Americans to save face and to maintain their untenable position in Berlin.”

The airlift quickly got more efficient. More planes were added, and flight schedules became tighter, dropping to just three minutes between takeoffs. Teams on the ground in West Berlin became better and better at unloading cargo from flights.

The ground crews were all local Berliners, and they eventually reached a point where they could unload a plane in under 10 minutes.

Some flights carrying coal would just dump the coal in a field at a low altitude rather than taking the time to land.

One of the most famous parts of the airlift came from an American pilot by the name of Gail Halvorsen. One day after landing, he went into Berlin and encountered a group of children. He gave them his last two sticks of gum and was impressed at how the children shared and didn’t fight over it.

He promised them the next time he flew to Berlin, he’d bring more candy. The children asked him how they would know it was him, and he said he would wiggle his wings.

The next day he dropped candy bars out of the plane with handkerchief parachutes attached. Every day more children showed up at the end of the runway to get candy that he would drop. He became known as “uncle wiggle wings”.

His superior officer was initially upset, but eventually, General William Tunner, who was the commander of the entire airlift, heard about it and gave his approval. In fact, he expanded the candy drops, calling it “Operation Little Vittles”.

Candy manufacturers eventually donated candy, and it was a huge public relations success. Over the entire course of the airlift, over three tons of candy were dropped.

Everyone thought that the airlift was going to be a temporary thing, but as the months dragged on, the airlift became more efficient, and the allies proved that they could keep it up indefinitely.

The Soviets eventually realized that the blockage wasn’t working. Moreover, the allied counter blockade was hurting East Germany just as much because the coal was all in West Germany. The lack of coal was preventing East German factories from operating.

It was also a PR disaster for the Soviets, blocking food and medicine for 2,000,000 people.

After the record day on April 15, the Soviets announced that they were willing to end the blockade. The two sides went into negotiations, and the blockade of West Berlin formally ended just after midnight on May 12, 1949.

On May 23, 1949, the nation of West Germany was officially created.

Even though the blockade ended, the airlift kept going for several months as a safety precaution. Within a few months of the blockade ending, West Berlin had a three-month surplus of supplies, giving them a cushion should they ever need to restart the airlift.

The airlift wasn’t without a cost. 39 British and 31 American airmen died during the course of the airlift.

The blockade of West Berlin and the subsequent airlift can be thought of as the beginning of the Cold War. The event caused the post-war split between the former World War II allies.

If you are in Berlin, you can visit the Allied Museum, which documents the history of Berlin from 1945 to 1950. They have some of the original airplanes used during the airlift on display.

Without the Berlin Airlift, the entire post-war history of Europe would have looked remarkably different.