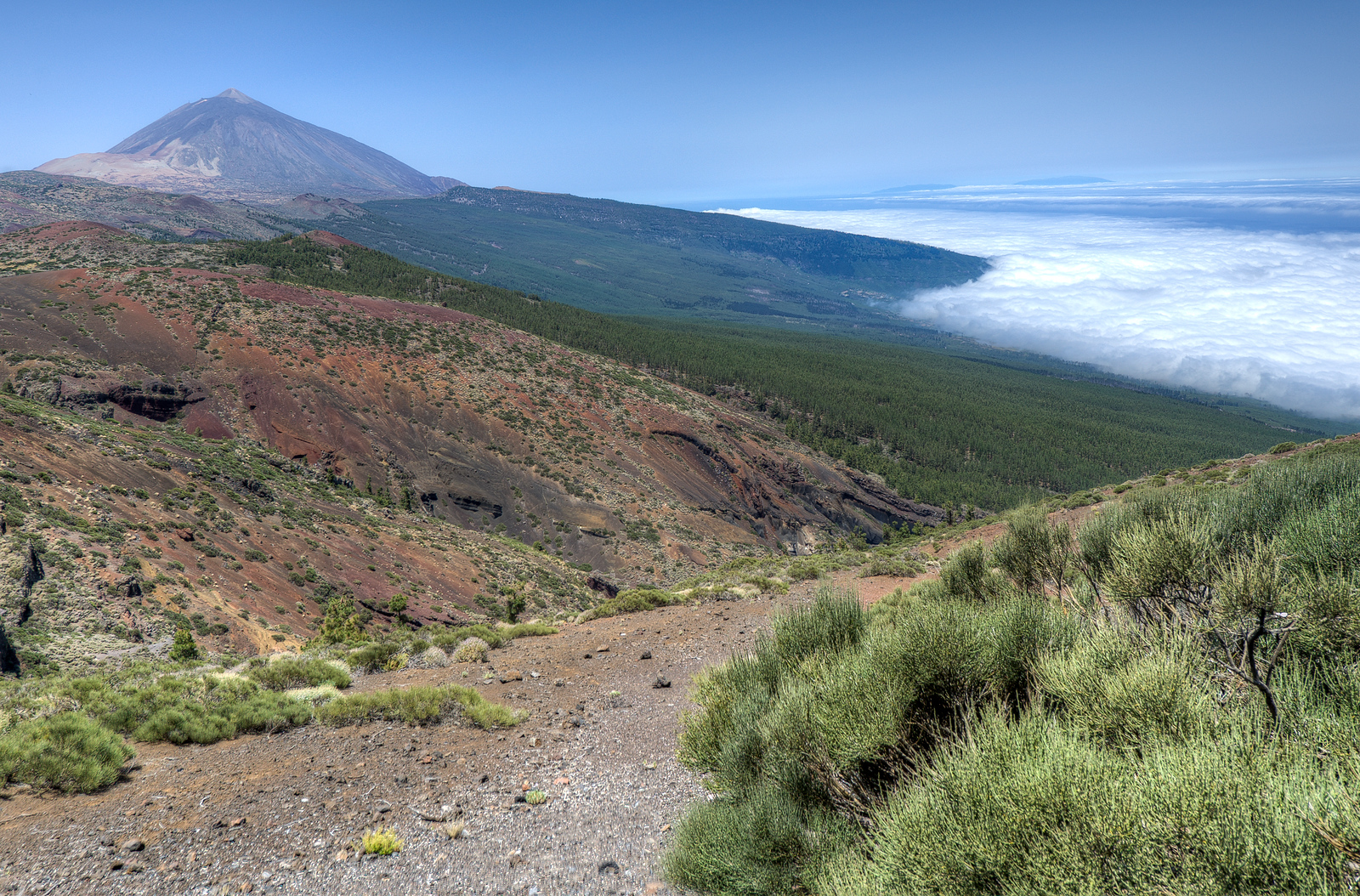 Mount Teide is the highest point in all of Spain and it sits at the center of Teide National Park on Tenerife in Spain’s fascinating Canary Islands. The park itself is a giant caldera with geologically-recent lava flows from the Teide volcano, and a desert-like environment stretching far into the distance where ever you look.

On the drive up to the park, you will pass through several different ecological zones including a forest of Canary Island Pine Trees. Tiede really is one of the most spectacular parts of the Canary Islands and if you are there on a clear day you will be able to see at least four other islands. Teide is an unmissable day trip and must be a part of any trip to Tenerife.

From the World Heritage inscription for Teide National Park:

Situated on the island of Tenerife, Teide National Park features the Teide-Pico Viejo stratovolcano that, at 3,718 m, is the highest peak on Spanish soil. Rising 7,500 m above the ocean floor, it is regarded as the world’s third-tallest volcanic structure and stands in a spectacular environment. The visual impact of the site is all the greater due to atmospheric conditions that create constantly changing textures and tones in the landscape and a ‘sea of clouds’ that forms a visually impressive backdrop to the mountain. Teide is of global importance in providing evidence of the geological processes that underpin the evolution of oceanic islands.

Teide National Park features Mount Teide as its main attraction. However, the entire coverage of the protected area by UNESCO spans to 18,990 hectares in land area. After it was named by UNESCO as a World Heritage Site in 2007, it was also recognized as one of the 12 Treasures of Spain.

As of 2015, Teide National Park is the most visited national park in Europe and Spain! It also ranks number eight in the world in terms of national parks with most tourist visits. Hence, it speaks to the popularity of this national park as a tourist destination, apart from its cultural and natural value.

On top of these two peaks, the Observatorio del Teide belongs within the national park limits. It’s located on a ridge to the east of Mount Teide and is also known as Teide Observatory. This was distinguished as the first major international observatories that were established. Due to the good astronomical sight-seeing conditions in the region, it has attracted the attention of many people, especially astronomical enthusiasts.

Mount Teide and other volcanoes and observatories found within Teide National Park are not the only sights available to enjoy here. This UNESCO site also boasts of having a variety of flora and fauna species, as well as distinctive landscape formations.

The lava flows from Mount Teide has resulted in a mineral- and nutrient-rich soil within the premises of Teide National Park. This rich soil has made it possible for various life forms to grow and develop among its land. In fact, there are 168 vascular plant species within the park, and 33 of those are endemic to Tenerife.

Meanwhile, the park is also filled with Canary Island pines that cover the middle slopes of the volcano. For the higher altitudes, the Las Cañadas caldera offers shelter for other fragile species, including the Canary Island cedar and pine. The Teide white broom is the most dominant plant species found within the park. Other unique plant species that are found within the park include wallflower, Teide bugloss, Teide violet, and Teide daisy.

For the mammal species, Teide National Park is home to bats (specifically Leisler’s bat). This is the only native mammal species found in the park. Over the years though, other mammals were introduced into the park, such as the rabbit, house mouse, mouflon, Algerian hedgehog, and the feral cat.

Plan a Trip to Teide in Tenerife

How to Get to Tiede: Getting to Teide National Park is simple in a rental car. Or you can plan to a round trip route by public bus from Puerto de la Cruz or Los Cristianos—the two daily buses are timed for visitors to enjoy a visit and still make it back to town on time.

Where to Stay: My City Hotel in Puerto de la Cruz is the best deal to be had. Also consider Hortensia Suites Apartments, which is fabulously located in Los Cristianos, and Hollywood Mirage is also an affordable luxury.

Read Next: 19 Incredible Photos of the Canary Islands