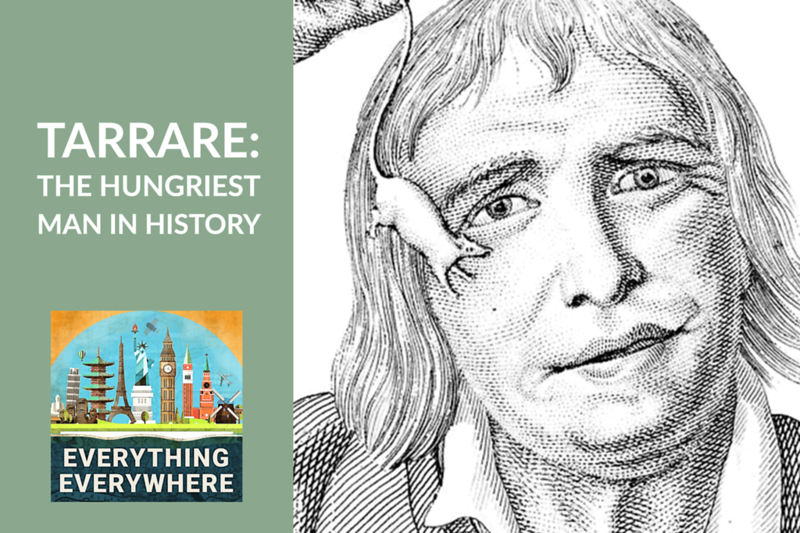 Have you ever been really full after a meal? Like really really full?

Could you imagine eating and never feeling full? Like going to an all you can eat fish restaurant and then getting kicked out for eating too much and going fishing so you can eat more fish?

Well, there was one Frenchman who could never be satiated and the results of this condition were….astonishing.

Learn more about Tarrare and his medical condition which, thankfully, has never been seen since, on this episode of Everything Everywhere Daily.

I’ve never had to put a disclaimer at the start of a show before, but I feel like I should for this one.

There is no explicit language coming, nor is there anything suggestive or any adult themes, however, much of what I’m going to be talking about is pretty gross. Think Garbage Pail kids times 10 levels of disgusting.

So, I don’t want any emails saying how this episode was gross and you are going to stop listening to the show. This is history people, and sometimes history is gross.

So, having given fair warning, let me introduce Terrare.

He was born sometime around 1772 somewhere around Lyon, France. We know next to nothing about his origin, including his real name. We don’t know if Terrare was his real name or a stage name. We do, however, know he existed due to the extensive amount written about him during his lifetime.

He grew up a pretty normal kid as far as well can tell. However, once he hit puberty, he developed an appetite. By this, I don’t mean he ate four meals a day or had second or third helpings at dinner. By this I mean he at constantly, and he ate astonishing amounts of food.

By the time he was 17 years old, he could eat his entire body weight worth of food in a day….and he only weighed 100 pounds or 45 kilograms. Actually rather skinny for a 17-year-old boy.

In a single day, he could eat a quarter of a cow all by himself.

Very quickly after developing this appetite, his parents kicked him out of the house. The late 18th century was a time when getting enough calories was still a big issue for most people. Funding this sort of consumption would bankrupt almost anyone.

He left home and basically became a homeless vagrant. He would beg for food, scrounge up anything and everything he could eat, and eventually fell in with a group of traveling thieves.

He began to do street performances where he would eat anything which people would give him. He’d devour an entire bag of apples in minutes, sometimes swallowing them whole.

While he was performing and grabbing the attention of the crowd, his compatriots would be pickpocketing the crowd while they weren’t paying attention.

In addition to eating food, he would swallow stones, corks, and anything else which the audience gave him, including live animals.

He eventually set off on his own as a street performer in Paris doing the same routine, mostly so he could get as much food as possible.

However, his direction changed in 1792. The French Revolution had started and its neighbors had formed an alliance and had gone to war against France. It was known as the War of the First Coalition.

At the age of 20, Terrare decided to join the army to serve his country. It is this period where we know the most about Terrare because the observations of him were so well documented.

In the Army, he had a difficult time because he was only given a single soldier’s ration.

He began doing favors for everyone he could to get their food or their leftovers. He would scavenge the dung heaps and garbage pits in camp look for food.

He was so lethargic and listless that he was sent to a  French military hospital for observations.  Here too he began scrounging the garbage for food as well as taking food from other patients.

There he encountered Pierre-François Percy, the head surgeon of the hospital who became fascinated by his case. He and other doctors starting subjecting Terrare to experiments.

They first assigned him quadruple rations, which he devoured no problem. To put this in perspective, this would be the equivalent of regular 12 meals per day.

They then had a meal prepared for 15 people to see if there was a limit to what he could consume in one sitting. Terrare consumed all the food laid out, and then summarily fell asleep.

Then the experiments started to get weirder….and remember my warning at the start of the show.

He was given a live cat. He tore into the cat with his teeth and disemboweled it. He sucked all the blood out of the cat and then consumed everything other than the bones. A half an hour later, he coughed up the hair and fur as if he was a bird of prey. He did the same thing with a puppy.

He was given a full-grown eel. He crushed its skull with his teeth and then swallowed the eel whole.

Here I should probably describe the man himself.

From all accounts, if you saw him on the street you probably wouldn’t notice anything different about him at first. However, he had an extremely large mouth. His cheeks were incredible flaps of skin and he could supposedly put 12 apples or eggs in his mouth at one time.

Take out a dozen eggs and try to stick them all in your mouth. That’s a big mouth.

While he looked normal, under his shirt he and an incredible layer of sagging skin around his midsection. He had so much loose skin, he could supposedly wrap it around himself like a belt. It came from the fact that when he ate so much, his stomach would expand like a balloon.

Even if he did look normal, there was something about him which everyone would have noticed almost immediately before you even saw him: his smell. It was described as being so smelly that “to such a degree that he could not be endured within the distance of twenty paces”.

After he ate, he smelled even worse.

He was constantly sweating and he had an incredibly high body temperature.  Vapors rising off of his body were said to be visible. It was as if he was a real-life pigpen from the Peanuts cartoons, and the stink lines drawn around him were real.

He was also constantly belching and farting.

I once encountered a man like this in Bulgaria. He smelled like an ammonia truck crashed into a sewage treatment plant. He was literally kicked off the bus I was on by the driver because he smelled so bad. True story.

Now, you are all probably also wondering if you eat that much food, it has to go somewhere.

Well, he was reported to suffer from chronic diarrhea which was “fetid beyond all conception”.

At this point, he might have been a medical curiosity, but he was hardly fit for military service. However, the higher-ups thought that he might be of use.

They thought that he might be the perfect person to serve as a courier of secret messages.

He was given a small box containing a message which he swallowed. Two days later he passed the box and the message was still intact.

With the experiment a success, a demonstration was performed for a group of generals from the Army of the Rhine on the front with Germany. He swallowed another box for the generals, then as a reward, he was given a wheelbarrow full of raw cow lungs and liver which weighed 30 pounds or 14 kilograms.

He ate the entire wheelbarrow full of offal in front of the generals.

His first mission was to get a message to a colonel which was imprisoned behind enemy lines.

The Germans chained him to a latrine and waited.

When he finally passed the box, the message said nothing other than for the colonel to notify them if he actually received the message.

The Germans set up a mock execution where they marched him to the gallows only to give him a reprieve at the last minute, then sent him back to France, probably because they felt sorry for the guy.

Back in France, he returned to the hospital. They tried to find something which would cure him, but nothing worked.

He would sneak out to eat the waste outside of butcher shops. He would fight with dogs in the street for dead animals.

In the hospital, and remember I warned out, he was caught drinking the blood from patients who had received bloodlettings, which was still a thing at the time.

He was also caught consuming cadavers in the hospital morgue.

He was evicted from this hospital when a 14-month-old baby disappeared.  While there was no hard evidence, Terrare was the chief suspect and no one would bother to defend him anymore.

What happened to him the next several years is unknown. However, in 1796 he showed up at a hospital in Versailles.

He was sick and thought it was because of a gold fork he had swallowed two years earlier. The doctors diagnosed him with tuberculosis.

A month later, he passed away at the age of 26.

After his death, his body, not surprisingly, began to decompose rapidly.

An autopsy was performed to try and get some insight as to how he was able to do what he did.

The first thing the doctors found is that when his mouth was opened, you could see straight down to his stomach.

His stomach was enormous and took up almost half of his abdominal cavity. He likewise had an enlarged liver and gallbladder.

His stomach was also filled with pus and ulcers which probably came from many of the foreign objects he swallowed over the years.

In the over 200 years since his death, there has never been another medical case like Tarrare. There have been people with large appetites, but no one who was capable of consuming so much food.

It would be reasonable to be suspicious about this story, but for the fact that there were many eyewitnesses and it was documented by reputable doctors of the era.

Modern doctors suspect that Tarrare probably had some condition with his thyroid, hypothalamus, or amygdala. This can affect appetite as well as body temperature and metabolism.

His stomach, skin and cheeks were probably extended due to years of constant expansion from eating so much.

To this day, Tarrare remains the only person who if they said they were so hungry they could eat a horse, could actually back up their claim.

A great short listen and learn

This Podcast has distilled down very interesting topics from all over the world into a relevant and captivating podcast! A too good to miss Poscast!

Thank you very much HapiOtter. Doing the research is the interesting part of the show and after 320 episodes I think I’m getting the hang of it.

I’d also like to say thank you to everyone who listens. The show recently passed the half-million download mark. Hopefully, if the show can keep growing and gaining listeners, I’ll be able to add some new features to the show which I have planned.