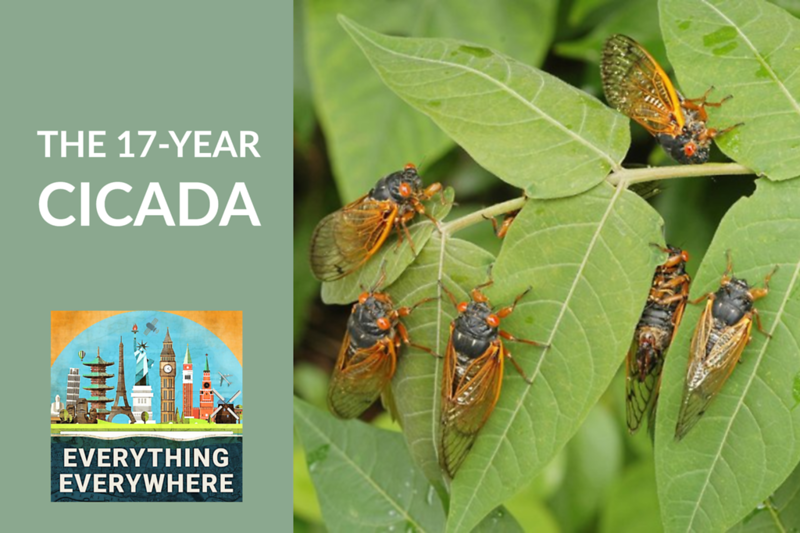 Every 17 years one of the grandest spectacles in nature takes place. Billions of insects in a seemingly coordinated fashion will emerge from the ground and cover the skies and the trees.

This is all part of their extremely unusual life cycle which consists of an extremely long juvenile period and very short adulthood.

Learn more about periodic cicadas and their unusual behavior and life cycle on this episode of Everything Everywhere Daily.

This episode is sponsored by audible.com

My audiobook recommendation today is Empire of Ants: The Hidden Worlds and Extraordinary Lives of Earth’s Tiny Conquerors by Susanne Foitzik.

Ants number in the ten quadrillions, and they have been here since the Jurassic era. Inside an anthill, you’ll find high drama worthy of a royal court; and between colonies, high-stakes geopolitical intrigue is afoot. Just like us, ants grow crops, raise livestock, tend their young and infirm, and make vaccines. And, just like us, ants have a dark side: They wage war, despoil environments, and enslave rivals – but also rebel against their oppressors.

Empire of Ants will inspire new respect for ants as a global superpower – and raise new questions about the very meaning of “civilization”.

Cicadas are a very common species of insect. There are over 3,000 species of cicadas all around the world and they can be found on every continent except for Antarctica.

Most of the species are annual species with a regular life cycle that occurs every year, with some species going dormant for a few years.

However, there is a particular genius of the cicada family called the Magicicada or periodic cicadas. They are found exclusively in the eastern part of the United States and they have a very unusual development cycle.

They will only appear once every 13 or 17 years. When they do, if you happen to be in the area, it can be an incredible experience. Billions of insects will rise up almost simultaneously and create an incredible cacophony

So what is happening exactly? Why do they do this?

Periodic cicadas engage in a reproductive strategy known as predator satiation. The idea behind it is pretty simple. It is basically taking a shotgun approach to reproduction. When the cicadas emerge, a whole lot of them are going to get eaten by predators like birds.

However, if you multiple billions of cicadas, they can’t eat all of them.

It was sort of like the online campaign a few years ago to get a million people to rush into Area 51. If you get enough people, it would be impossible to stop all of them.

A one-acre plot of land with periodic cicadas can have as many as 1.5 million of them emerge at the same time.

Sometime in the spring of the year they are going to be released, they begin digging tunnels to the surface. Some might actually build small mounds which extend above the surface.

They are all waiting for the ground temperature to reach a certain level, which is about 64 degrees Fahrenheit or 18 degrees Celsius.

When the temperature reaches that point, which is usually in late April or early May depending on the area, they all come out at the same time.

All of the cicadas which emerge at the same time on the same schedule are considered to be part of a brood. There are 23 broods in the United States which are on separate 13 or 17-year timers.

In 2021, the largest brood, brood X, is coming out which is why people are making such a big deal out of it. Brood X is actually scattered over multiple states from Tennessee, Ohio, Indiana, Pennsylvania, and some other states.

So what do the cicadas do once they leave the ground?

Once they are out, they are nymphs. They are still in the casing which they’ve been growing in, in the ground. The first order of business is to molt. They will do that either on the ground or on some vertical surface.

They will then do nothing for a few days as they wait for their exoskeleton to harden and finalize their transition to the adult stage.

I should note that cicadas are not locusts. Locusts are more like grasshoppers. They have a mouth and they eat things. Cicadas don’t have a mouth. They have more of a sucker like a mosquito. They feed by making slits in plants and consuming the fluid. They might damage plants, but they don’t consume them per se. They won’t wipe an entire field of crops.

As an adult, a cicada has one real purpose in life: to reproduce. At this point, once it becomes an adult it has only a few weeks to live. During this time it has to not be eaten and try to find a mate.

The males will make an incredibly loud sound that can reach up to 100 decibels, which can be as loud as a motorcycle or a jackhammer.

The females will then be drawn to one of the males and then make a v-shaped cut in a twig where they will lay their eggs. They might leave about 20 to 30 of these cuts in trees and lay a total of about 600 eggs.

In 6-10 weeks, the eggs will hatch, and the nymphs will fall to the ground where they will burrow into the soil and wait 13 or 17 years before they come out again.

By the time the nymphs fall to the ground, all of the adults who laid the legs will be dead and they will be fertilizer for all the plants they’ve been feeding off of.

How do they live when they are underground? They feed off of liquids in the roots of plans. They cut slits just as they do in their adult stage.

One question many people have is why they do they come out on a 13 or 17-year cycle? It’s a really long time and the vast majority of other cicada species have a cycle anywhere near this long.

Well, the best guess most researchers have is that 13 and 17 are prime numbers. That means other species which might feed on the cicadas can’t develop a reproduction cycle of their own that could feed on them unless they too followed the same 13 or 17-year cycle. Because it’s such a long cycle, it’s very hard to do.

One of the surprising animals which eat cicadas are humans.

Cicadas have a very similar nutritional profile to shrimp. Some people call them land shrimp. People with shellfish allergies often have allergies to cicadas.

The key is to get them right after they come out of the ground before they develop their hard exoskeleton. You only have a short window of about a week to harvest them.

Most people put them in a freezer to kill them, and then boil them to clean off anything which might be on them.

From there, you can fry them, bake them, or whatever. Cicadas tacos have become very popular.

So, if you happen to be in an area where the periodic cicadas are hatching, put in some earplugs to drown out the sound and enjoy some cicada tacos because you aren’t going to get another chase until the year 2038.