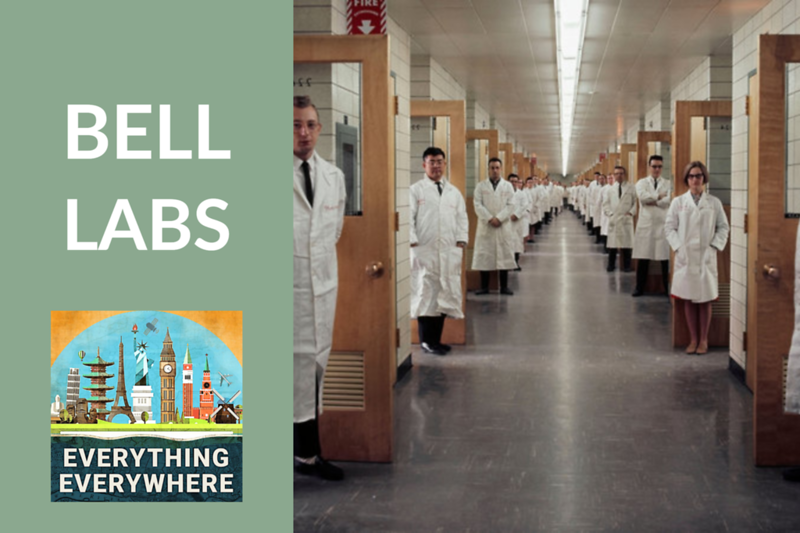 They were all invented or developed at the same place by the greatest collection of scientists and engineers ever assembled.

Learn more about Bell Labs, the greatest research laboratory in history, on this episode of Everything Everywhere Daily.

This episode is sponsored by rerouted.co

I’ve told you that Rerouted is a great place to buy affordable used adventure and outdoor gear.

However, it is also a great place to sell your used gear. If you have gear sitting around your house that you no longer use, Rerouted can find a good home for your equipment.

Before you go and buy your next piece of outdoor or adventure gear, you owe it to yourself to check out rerouted.co. It could save you a bundle. And they can also help you sell your used gear as well.

Once again, that is Rerouted.co

Bell Labs pretty much invented everything.

OK. Maybe that isn’t quite true, but it isn’t far from the truth. Bell Labs was the single greatest innovation engine of the 20th century. The only thing I can really think of which would even be close to it would be Thomas Edison’s Lab in the late 19th and early 20th century.

Bell Labs was found by and named after Alexander Graham Bell, the inventor of the telephone.

In 1880 he received an award The Volta Prize by the French Government for the invention of the telephone. The award was 50,000 Francs which was worth about $10,000 at the time.

With the money, he established the Volta Laboratory in Washington DC. The purpose of the lab was to work on mostly audio-related technology such as telephone technology, phonographs, and technology to help the deaf.

In 1887 it created the Volta Bureau which changed its name never times over the years and today is known as the Alexander Graham Bell Association for the Deaf and Hard of Hearing.

At the same time the company he created, Bell Telephone, which later became American Telephone and Telegraph, became a monopoly owning the entire telephone industry in the United States. They didn’t just own the telephone lines, but they also owned all the telephones. You literally couldn’t buy a telephone from anyone but Bell Telephone.

The actual telephones, as well as switching equipment, were manufactured by a company called Western Electric, which was wholly owned by AT&T.

On January 1, 1925, Bell Telephone Laboratories was created which consolidated all of the research and development in the entire Bell System.

In addition, all of the regional Bell Companies had to pay a licensing fee based on their revenue to Bell Labs, which was the license holder for the technology for the entire Bell System.

At its inception, the labs had 3,600 scientists, engineers, and staff and they were headquartered on the lower west side of Manhattan.

Bell Labs at this stage in time, and for the next several decades, was a perfect storm of research. They were given an incredible amount of money from what was a legal monopoly in the richest country in the world.

In theory, they were responsible for developing and improving the technology for the Bell System, but their work went far beyond that.

The largest facility by the number of employees was in Napierville, Illinois which employed over 11,000 people.

Bell Labs was spun off into a new company called Lucent Technologies in 1996. In addition to the labs, the new company also contained all of the equipment manufacturing of AT&T.

That company saw its assets crash after the dot com bubble burst and it was eventually purchased by the French company Alcatel.

In 2016, the company was then purchased by Nokia, and it is known as Nokia Bell Labs today. It is only a fraction of the size it was as its peak.

So, history lesson aside, what did Bell Labs do?

At a very high level, the work done by researchers at Bell Labs over the years earned nine Nobel Prizes. They also earned five Turing Prizes, which is like the Nobel Prize for computing technology.

In the 1920’s they created the technology which allowed motion pictures to synch up with sound.

They also created the technique for statistical process control which was the origin of the Sigma Six technique for process improvement.

They also created the one-time pad cipher, which is an uncrackable form of cryptography, and also did the first long-distance transmission of a television image.

In the 1930s a radio engineer named Karl Jansky was investigating why there was static on shortwave radio transmissions, and he ended up discovering radio waves from the center of the galaxy. This was the beginning of radio astronomy.

In the 1940s they created the first photovoltaic cell, which launched the entire solar power industry.

In 1947, a team that went on to win a slew of Nobel prizes, developed perhaps their greatest invention, the transistor. The transistor was one of the most important inventions of the 20th century and will be the subject of its own episode someday. This opened up the door for the entire electronics industry and eventually the integrated circuit and computers.

In the 50’s they helped developed TAT-1 which was the first transatlantic telephone cable that could transmit a whopping 24 calls at one time.

They also developed the theoretical foundations for the creation of the laser.

In the 1960s they created the first gas laser. They helped design Telstar, the first telecommunications satellite.

In 1965 they discovered cosmic microwave background radiation, which helped validate the theory of the Big Bang.

They also created the first version of the UNIX operating system as well the first charged coupled device, which is the basis of digital cameras.

In the 1970s they developed the C programing language, the first 32-bit microprocessor, and the first computerized telephone switching system. They also helped create the first system to deliver voice over fiber optic cables.

In the 80s they developed both CDMA and TDMA which was the basis for all digital cell phone signals up until the deployment of 4G and 5G.

They developed C++ which is the programing language in which many, many software programs are written. They also helped deploy the first transatlantic fiber-optic telephone cable.

In the 90s they developed the first 56k modem and. a new type of electron lithography for printing computer chips.

Frankly, I’m only scratching the surface of what they developed. Researchers at Bell Labs have been awarded over 17,000 patents. Many of them were important, yet obscure breakthroughs

In the process of recording this episode and delivering it to you, there were numerous innovations developed at Bell Labs which helped make that possible.

Today, Bell Labs is a shell of its former self. As of 2008, it was reported that there were only 4 physicists on staff and that number probably isn’t greater than that now. The role it played in research and development is now in the hands of the new big companies.

However, for several decades, Bell Labs was the global leader in research and development.

From fiber optics to lasers, to electronics, to wireless technology, so much of our modern world wouldn’t be possible without the inventions which came out of Bell Labs.