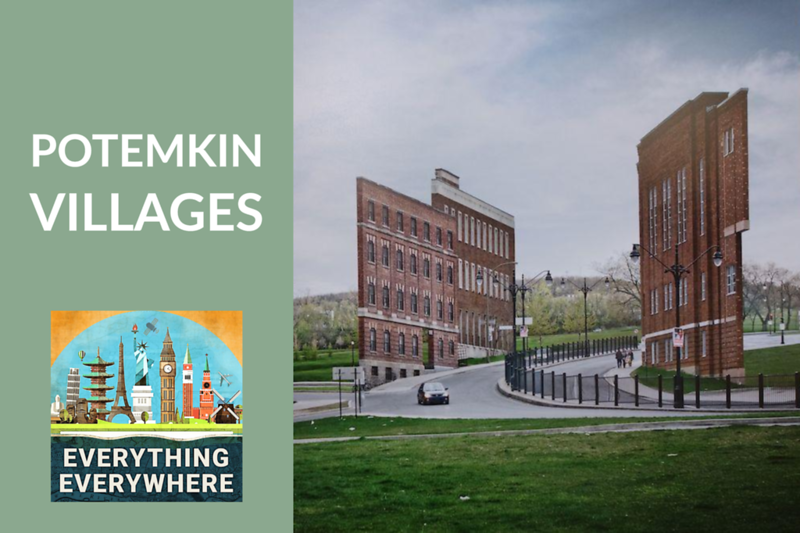 In 1787, Russian Empress Catherine the Great took a six-month trip to visit her newly acquired territories in the Crimean which had been taken from the Ottoman Empire. Along the way, she sailed down the Dnieper River and saw many of the shiny villages in the new Russian Crimean.

However, there was a problem. The villages were all fake.

Learn more about Potemkin Villages, and how they still exist in the modern world, on this episode of Everything Everywhere Daily.

They offer a multitude of live courses with instructors you can interact with online.

The legend of the Potemkin Villages dates back to the reign of Empress Catherine the Great.

In 1784, she annexed the Crimean Peninsula which had formerly been the territory of the Ottoman Empire.

She assigned as governor of this newly acquired region one of her senior advisors and, rumor had it, her lover, Grigory Potemkin.

Potemkin had been assigned the viceroy of the region of Southern Russia 10 years earlier and the Crimea was added to his territory.

Potemkin ruled these lands in Catherine’s name as basically an absolute dictator.

He was a builder and established many cities in the region. The city of Simferopol, which is the second-largest city in the Crimea, was built by Potemkin.

Potemkin was very hands-on, personally approving everything about the new cities he built.

He also was responsible for building a Black Sea Fleet for the Russian Navy.

…and he was responsible for the brutal repression of the Cossacks in the region.

He threw a lot of money at the development of cities and new villages in the Crimean and his spending became legendary, even before the events which made his name famous.

Emperess Catherine wanted to see the new lands for herself, so she went on a grand tour of Southern Russia and the Crimean in 1787. From January 2 to July 11 she inspected her lands which were governed by her favorite, Grigory Potemkin.

Potemkin was born to a middling noble family, but thanks to Catherine he had been elevated to a Prince of the Holy Roman Empire, a Prince of Russia, a Russian Field Marshall, and of course the viceroy of Southern Russia.

He really wanted to impress Catherine who was the source of all his power, not to mention the fact that they were intimate.

However, despite all the funding, many of the villages along the way were not what you’d call in good condition. Moreover, they weren’t really that fond of Catherine.

At this stage in the tour, Catherine and her entourage traveled down the Dnieper River.

The boats weren’t close enough to most of the villages to actually see them closely, and Catherine wasn’t going to stop in every village.

Potemkin, and again this is according to legend, created an elaborate ruse to fool Catherine into thinking that everyone was great.

He supposedly created building facades on wheels. These were just the fronts of buildings like you would see on the set of a motion picture. He also had a herd of cattle and well-dressed villagers.

The building facades, the cattle, and the people would move from village to village to give Catherine the impression that things were better than they actually were.

The phrase “Potemkin village” has become known as a metaphor for putting up a false front. Miriam Webster defines it as “an impressive facade or show designed to hide an undesirable fact or condition”.

There have been dozens of cases, both literal and figurative, of Potemkin Villages over the years.

Perhaps the best-known example is a literal village known as Kijongdong. It is in North Korea just beyond the Demilitarized Zone within sight of South Korea.

The entire village, which the North Koreans call the Peace Village, is actually uninhabited. It was created in the 1950s to look appealing to South Koreans to encourage them to defect to the North.

Technically, it isn’t uninhabited per se. There are military units that have barracks there and the buildings hide artillery guns.

In World War II, the Nazis created the Theresienstadt Ghetto, which was a concentration camp that was built to show the Red Cross that conditions in German concentration camps weren’t that bad. In reality, it was just a waystation for Jewish prisoners who were being sent to Auschwitz.

In 1998 the failed company Enron built an entire trading floor in their corporate headquarters in Houston. The only purpose of the trading floor was to impress Wall Street analysts who came to Houston for the company shareholder meeting.

In 1944, United States Vice President Henry Wallace took a trip to the Soviet Union. There he visited a camp called Magadan on the Soviet Pacific Coast. He thought the people there were volunteers when in reality, they were prisoners engaged in forced labor.

The idea behind a Potemkin Village extends beyond just physical structures. It happens all the time on the internet.

So-called “influencers” will buy thousands, and sometimes millions, of followers, and well as buying likes, to make it appear as if they are actually popular when in fact, they are not.

They will spend hours setting up elaborately staged shots to give the appearance that their life is much more glamorous than it really is. I’ve seen this first hand. I was climbing up a mountain in Sri Lanka and there was an influencer with us who climbed the mountain in an evening gown and heels.

They might also rent expensive cars for the day just so they can take photos in them, to make people think that they actually own the car, and likewise, some private jet companies will rent out jets that never go anywhere so that influencers can take photos in and around it.

Occasionally, Instagram will purge fake accounts and the truth can be seen. After one fake follower purge, one influencer went from over half a million followers to under 5,000. They deleted their account the next day.

The metaphor of the Potemkin Village is a great one, and if it didn’t exist, we’d probably have to invent it.

However, here is where I need to pop the bubble on the historical story.

Most historians think that the fake village stories of Grigory Potemkin were probably fabricated.

Almost everything about the story is true. Catherine did annex the Crimea, she did take a tour and Potemkin did want to impress her.

However, the reality is that he spent a ton of money on fireworks and decorations. He did spend money to spruce up the villages, but he wasn’t secretive about it. He openly bragged about spending the money to impress Catherine.

The rumor of the Potemkin Villages was first spread by a Finnish politician and the rumor then spread throughout Europe. It became an urban legend for Europeans to wanted to spread the idea that Russia was poor and backward.

People who were on the tour later remarked how the rumors were absurd and it wasn’t true, but by this time it was too late.

In a way, it is too bad that the stories aren’t true, because it really is a great story.

Nonetheless, true or not, the idea of the Potemkin Village is something that is with us and will be for quite some time.