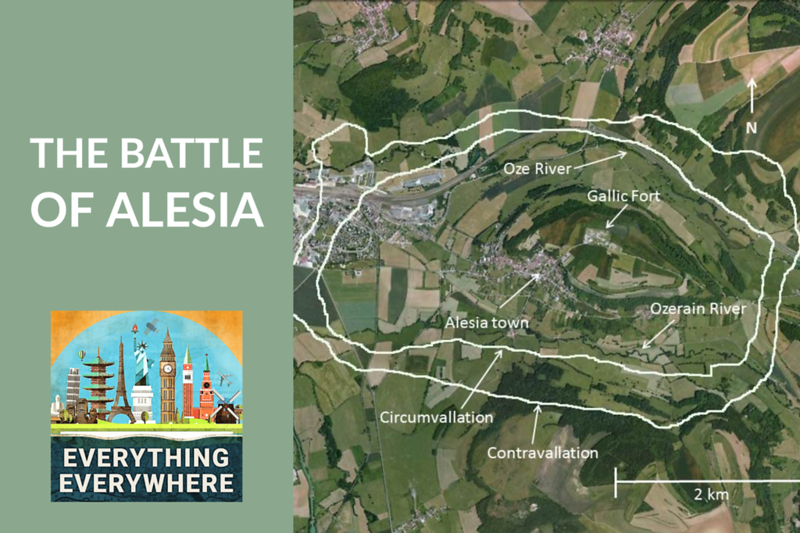 In the year 52 BC, the Roman General Julius Caesar fought the last major battle in the conquest of Gaul.

The implications of the battle have reverberated throughout history and can still be felt in the world today.

But the real story isn’t the implications of the battle, but how it was won. It was one of the most audacious gambles in military history, and it worked.

Learn more about the Battle of Alesia, one of the greatest feats of tactical military genius in history, on this episode of Everything Everywhere Daily.

This episode is sponsored by the Athletic Brewing Company.

Athletic Brewing founders Bill and John are craft beer lovers who wanted to cut back on alcohol without compromising on flavor, but the interesting flavors that they loved in other craft beers just weren’t available in non-alcoholic beer.

So, they brewed the beer that they wanted to drink. It turns out there are lots of others looking to moderate or abstain but are still thirsty for great beer.

Order their amazing beers at athleticbrewing.com.  Get free shipping on every order of two six-packs or more, and you can save 15% by using the code EVERYTHING15 at checkout.

During the period of the Roman Republic, the area we now know as France was called Gaul.

The Gauls held a special place in the Roman psyche. Over 300 years earlier, in 390 BC, a tribe of Gauls entered Italy and sacked Rome.

The Sack of Rome by the Gauls created a deep-seated fear of Gaul amongst Romans. Other than a thin strip of land along the Mediterranean coast, the Romans left most of Gaul alone for most of the Republic.

In the years after the Sack of Rome, periodic raids by Gauls into Italy caused the Romans to resort to human sacrifice, which was something they otherwise never engaged in.

Caesar came into the position highly in debt, having spent lavishly to attain the consulship. It was now that his time in office was over, that he was going to cash in.

Most proconsuls would go to a province and make money off of run-of-the-mill corruption and squeezing people with high taxes.

He began waging an unauthorized war with all the tribes in Gaul. He used a lot of trumped-up charges to justify his wars. He raised legions, developed logistical trains to support his units, played different Gaulic tribes against each other, and basically took advantage of their highly ununified tribal system.

Caesar also used his victories against the Gauls for massive propaganda purposes. Caesar’s Commentaries on the Gallic Wars was written by himself in the third person. They were periodically sent to Rome where they served as news updates for the citizenry. The result was that they made Caesar incredibly popular.

After several years of constant losses to the Romans, the Gauls eventually wised up and started to unify. They elected a single person who would lead them in battle: Vercingetorix.

The Gauls actually had a significant numerical advantage. They were fighting on their home turf and they didn’t need a long supply train.

After the selection of Vercingetorix as their leader, the Gauls went on a rampage killing Roman merchants, settlers, and smaller military units.

Word took time to reach Caesar who was wintering in Cisalpine Gaul, but when he heard about the tribes uniting, he headed back into Gaul.

He had supply issues, and he decisively lost a battle at Gergovia. In Gergovia, Vercingetorix was holed up in a fortified town, and he beat Caesar back when Caesar tried to take the town.

Vercingetorix then went to the fortified town of Alesia, which is where this story really begins.

Alesia was built on a hilltop and like Gergovia was heavily fortified. Vercingetorix was hoping that Caesar was going to make the same mistake he did at Gergovia.

Caesar had somewhere between 60,000 and 75,000 men which included Roman Legions as well as allies from Germanic Tribes.

Roman legions weren’t just highly disciplined fighters but also were very skilled at engineering. In fact, they spent far more time building camps and fortifications than they ever did fighting.

They built over 25 miles worth of fortifications, completely surrounding the hill city of Alesia. They built a wooden fence, 23 towers, trenches, anti-calvary traps, as well as trenches for the infantry. It was a well-built structure that would be very difficult to breakthrough, and everything was aimed at forces inside the town.

This was a massive effort and required chopping down a significant part of the forest around Alesia.

The entire effort took a month. Vercingetorix tried to disrupt construction by sending out sorties on horseback, but it wasn’t sufficient.

Caesar wanted to starve out Vercingetorix. In addition to the 80,000 men he had in Alesia, there were also women and children in the town as well. They all had to be fed and supplies were limited.

Vercingetorix had sent out messengers before the siege started to gather all the tribes and to have them come to Alesia to relieve the town and crush the Romans.

It was a waiting game. It was a matter of if the food in Alesia could hold out long enough for the reinforcements to arrive.

The Gauls knew that they didn’t have enough food for everyone, so they held a council where they decided to expel the old and the sick. The townspeople also agreed to send out their women and children. They wanted to save as much food as possible for the fighters, and they also  hoped that Caesar would take in the exiles as prisoners, which would then exhaust his food supplies.

However, Caesar didn’t take the bait. He didn’t let the Gauls expelled from Alesia to enter, so they sat stuck between the walls of the city and Caesar’s walls, where they starved to death.

Caesar became aware that Gaulic reinforcements were on the way. In fact, the number of troops coming was far larger than his forces, which were already engaged in a siege.

Up until this point, this was a pretty standard siege. The wall and fortifications were large to be sure, but so far this wasn’t something that would stand out in the history books.

What happened next is what made this battle famous, and what established Caesar as one of the greatest generals in ancient history.

If Caesar broke off the siege to confront the reinforcements, then 80,000 troops from the town would spill out to attack one of his flanks. If he didn’t break off the siege, then 250,000 men would be attacking him while he was besieging the town.

Most generals when put in Caesar’s position would do the prudent thing and retreat. Take your forces, get away, regroup and fight again another day.

What Caesar did was one of the craziest things any general did in the history of warfare.

He built another wall.

He took all his men and built an even longer wall that encircled his other wall.

The Romans and their allies were now sandwiched between two walls, serving as the dough in the donut. Vercingetorix and his 80,000 men were inside the donut, and a quarter-million relief forces would be outside the donut.

You don’t have to be a military genius to realize that this was worse than being surrounded. Caesar was not only going to be totally surrounded by a superior force, but he also had a larger force in the middle of his fortress.

It is hard to come up with a worse tactical position than being surrounded, but Caesar managed to find himself in one.

When the reinforcements arrived, they camped about a mile from the fortifications. They thought they saw what was a weakness in the Roman fortifications and the next morning they marched over 60,000 men to attack at that point.

While that was happening, Vercingetorix and his men came out of the town and began attacking the wall anywhere they thought it was weak.

Caesar sent one of his leading officers, Labienus, and six cohorts of calvary to the outer wall to stop the Gallic reinforcements.

He then sent Brutus, yes that Brutus, to hold off Vercingetorix on the inner wall.

The Romans were constantly putting out fires having to rush from one part of the wall to the other.

The Romans were stretched incredibly thin and every single person sandwiched inside the walls was put to helping hold the Gauls back.

Eventually, just as the exterior wall was getting weak, Caesar personally assembled the remaining cavalry inside the walls and broke through to the outside in a last-ditch effort. He wheeled around and began attacking the reinforcing Gauls from behind.

The calvary and his men at the wall managed to surround and destroy a large number of the Galic forces outside the wall, causing the rest of them to flee.

Vercingetorix and his men never broke through the inner wall and after the enforcements fled, he knew it was over.

Caesar had somehow managed to win despite being surrounded from within and without, by a significantly larger force.

Vercingetorix, close to starvation inside Alesia, surrendered. He would be held prisoner by the Romans for five years before being ritually strangled at Caesar’s triumph.

This was the last great battle against the Gauls. They never seriously united again to challenge the Romans. Gaul was incorporated into the Roman Republic.

Rome went nuts when they heard the news of the victory at Alesia. 20 days of celebrations were held.

Caesar was now the richest and most powerful person in the entire Roman Republic.

From here, you probably know the story. Caesar matches back to Rome, crosses the Rubicon, the die is cast, Rome has a civil war, Caesar wins another amazing victory at Pharsalus, gets named dictator, and gets assasinatied.

Much of what we know of Alesia came from Caesar himself. He is an extremely biased source. By Caesar’s own estimate, he killed a million Gauls and enslaved a million more, all in a war which Caesar provoked.

From a strictly military standpoint, however, was Julius Caesar the greatest general in antiquity? Probably not. But he was a great general, maybe the greatest in Roman history, and his performance at Alesia was possibly the greatest, most improbably victory in military history.