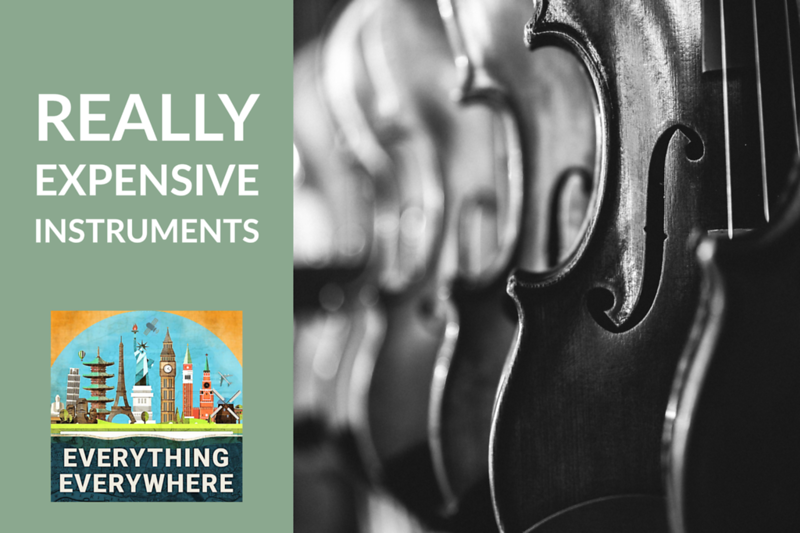 For a professional musician, their instrument is their livelihood. If making music is your career, it isn’t surprising that many top musicians will pay the equivalent of a new car on their instrument.

However, there is a class of musician which have instruments which are far more valuable than a car. They are the price of a mansion.

Learn more about the world of extremely expensive musical instruments, and why musicians play them, on this episode of Everything Everywhere Daily.

Let me start by setting the parameters of this discussion. I’m not talking about gimmick instruments. These would be things like a solid gold guitar or a platinum trumpet. The value in something like that would mostly be in the value of the materials which the instrument is made out of, not the instrument itself.

Likewise, I’m not going to talk about instruments that have value because who they were owned by.  For example, a 1970 Steinway Model Z upright piano which was owned by John Lennon, and which he used to write and record the song Imagine, sold for $2.1 million dollars.

The Heintzman Crystal Piano which was used during the opening ceremony of the Beijing Olympics sold for $3.2 million at auction.

Charlie Parker’s saxophone, Miles Davis’ trumpet, Jimmy Hendrix’s guitar, Ringo’s drums have all sold at auction for hundreds of thousands or millions of dollars. None of them were purchased to be played, they were purchased to sit in a museum or in someone’s private collection.

What I’m talking about today are actually instruments that are designed to be played by performers, and are purchased for the purpose of performing.

If you are a rock and roll musician and you wanted to buy the best guitar money can buy, you could easily pay in the five figures. Just doing a cursory search on guitars, you can spend around $35,000 dollars for a 1957 Fender Stratocaster Solid Body Electric Guitar.

The 1957 Stratocaster is a collector’s item, but it’s also considered a great guitar and it’s not impossible that someone might buy it to use.

You can buy the world’s most expensive guitar amplifier for much more, however. There is a custom-built, hand-made Dumble guitar amplifier that was made for country singer Merle Haggard. The amp was made by Alexander Dumble who only made 300 in his career, and the cost of the amp is $160,000.

Let’s say you play classical music. How much are you going to spend on your instrument?

A fully decked out, brand new Steinway Model D Grand Piano will set you back $163,000.

The brass section is relatively cheap.

Prices in the woodwind section also sort of in the ballpark. A high-end clarinet can run you ten grand, about the same as an oboe, with the catch that oboes tend to wear out faster. A professional oboist might need to get a new instrument every 5 years and some do it even more frequently.

All of this discussion so far was really a build-up to get to the string section, which is really what I want to talk about. The prices which are paid for the world’s top violins, violas, and cellos can be more than two orders of magnitude more expensive than most other instruments in an orchestra.

The famous violin soloist Joshua Bell plays a Stradivarius violin which was purchased for about $4,000,000 dollars.

These aren’t museum pieces. They actually play these instruments on a daily basis and in concerts. They travel with them and take them on planes and taxis.

Even string instruments that aren’t at the very top of the market can still go for many hundreds of thousands of dollars.

So what is the deal? How is it that a concert violin can go for 10 to 100 times more than a high-end instrument from almost any other section of the orchestra?

It all starts with the town of Cremona, Italy which sits approximately halfway between the cities of Milan and Bologna. In the late 17th and early 18th centuries, a luthier, (that’s someone who makes stringed instruments) by the name of Antonio Stradivari created some of the finest stringed instruments ever known.

During his career, which lasted until he was 92, he created 1,116 stringed instruments.

960 of those were violins, but he also created violas, cellos, guitars, mandolins, and harps.

Cremona was known as a center of instrument making and the Strataveri workshop was one of the best. For 300 years, musicians have believed that the instrument which came from the Stradivari workshop was the best ever made.

In recent decades tests have been done on Strataveri instruments to try to figure out why they have the sound they produce.

One theory holds that the wood which was used came from trees that grew during the Little Ice Age in Europe. This would have made the wood denser.

Another theory holds that the instruments were soaked in a chemical bath of borax and brine to protect them from insects. Those chemicals permeated the wood and help with the resonance of the instruments.

Others think it is as simple as good craftsmanship.

Are Strataverus violins really that much better?

Well, there have been several tests conducted to determine just that.

A French acoustics researcher named Claudia Fritz did a test in Paris where brought in professional violin players and had them test six violins.

The violinists were told that at least one of the six was a Strataveri. In fact, 2 were Strataverus’s, 1 was a Guarneri who was a contemporary of Strataveri, and the other 3 were modern violins made in 1980.

The players wore dark goggles so they couldn’t see which was which.

Some people criticized the study, saying that musicians weren’t used to playing with goggles on, so they did a follow-up study in Paris.

This time they again had six violins. Three were Stradivari, and three were newer violins. They were played behind a curtain for an audience so no one could see which instrument was being played.

The audience had 55 people which consisted of musicians, instrument makers, and other people with a trained ear.

They then repeated the study in New York with an audience of 82 people, also with experience in music.

In both Paris and New York, both audiences preferred the new violins over the Stradivari

So if there is no substantial difference, why do top-level violin players spend so much money to use these old violins?

It mostly has to do with branding. Having an expensive instrument means you are almost by definition, a top violin player. Only someone successful enough from touring and recording can afford to get an instrument like that or find a sponsor who will buy it.

There also might be a placebo effect at work. If a musician thinks they have a great instrument, it just might make them play better.

Nonetheless, the mounting evidence that Stradivarius instruments don’t really sound any better than new ones, prices keeps going up.

In 2011 the Lady Blunt Stradivarius violin sold for a record $15.9 million dollars in auction. The instrument was named after its previous owner, Lady Anne Blunt.

In 2016, the MacDonald Stradivarius Viola, one of only 10 Stradivarius violas in the world, was put up for auction with a minimum bid of $45 million dollars, but there wasn’t a bidder.

It probably only a matter of time until these record prices get broken. As they get more expensive, many of these instruments might get taken out of the hands of musicians and placed in museums as the cost of insurance and the risk of damage is simply too great.

If that should happen, the truth is, most people probably wouldn’t notice.