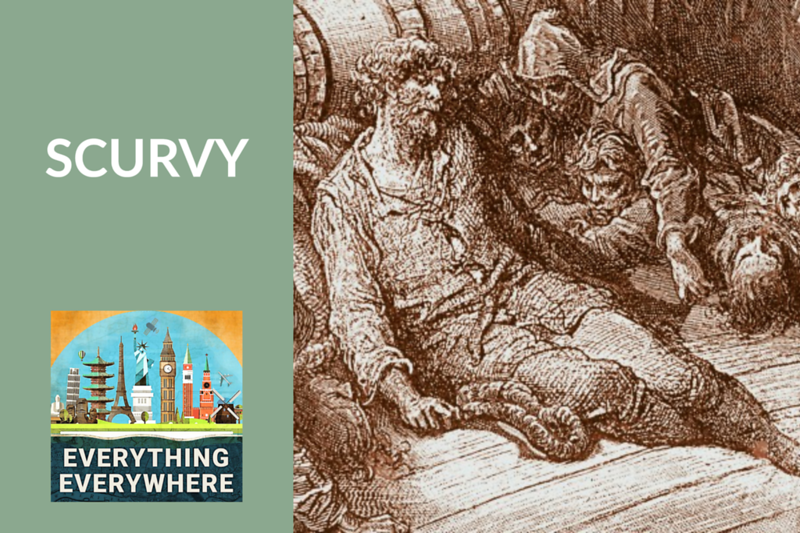 When Europeans began sailing the high seas on extended voyages, the most deadly thing they encountered wasn’t enemy navies, starvation, or even shipwrecks.

It was a painful disease where your body would literally start falling apart and it killed more than 2,000,000 sailors between the voyage of Columbus to the middle of the 19th century.

Learn more about scurvy and how it was eventually conquered on this episode of Everything Everywhere Daily.

This episode is sponsored by the Athletic Brewing Company.

Athletic Brewing founders Bill and John are craft beer lovers who wanted to cut back on alcohol without compromising on flavor, but the interesting flavors that they loved in other craft beers just weren’t available in non-alcoholic beer.

So, they brewed the beer that they wanted to drink. It turns out there are lots of others looking to moderate or abstain but are still thirsty for great beer.

Order their amazing beers at athleticbrewing.com.  Get free shipping on every order of two six-packs or more, and you can save 15% by using the code EVERYTHING15 at checkout.

Any discussion of scurvy has to start with what the disease is.

At its simplest, scurvy is caused by a lack of vitamin C. Most mammal species can produce their own vitamin C. Humans, however, are one of the only species which cannot.

So, this then raises the question, why is vitamin C so important?

Probably the most important protein in your body is collagen. It serves as the primary component of many of the connective tissues in your body. It is found in your cartilage, bones, gums, tendons, ligaments, and skin.

This is why scurvy is such a nasty disease. Your body starts to fall apart, and it is can be incredibly painful.

The symptoms of scurvy can begin after only a month without vitamin C. It starts with just feeling sluggish. Then you might bruise easily. Finally, your gums might bleed, your teeth might fall out, and your skin might openly start bleeding.

These are just the outward symptoms. Internally, all of your connective tissues are falling apart, and many of your internal organs would be bleeding as well.

One unnamed 16th century English ship surgeon spoke about his personal experience with scurvy, He wrote, “It rotted all my gums, which gave out a black and putrid blood. My thighs and lower legs were black and gangrenous, and I was forced to use my knife each day to cut into the flesh in order to release this black and foul blood. I also used my knife on my gums, which were livid and growing over my teeth. . . . When I had cut away this dead flesh and caused much black blood to flow, I rinsed my mouth and teeth with my urine, rubbing them very hard. . . . And the unfortunate thing was that I could not eat, desiring more to swallow than to chew. . . . Many of our people died of it every day, and we saw bodies thrown into the sea constantly, three or four at a time.”

The history of this disease and how it was eventually solved is a fascinating one, which involves discovering and forgetting the cure many times throughout history.

Scurvy was known to the ancients. There are records of ancient Egyptians and Greeks who knew about Scurvy.

A 5th-century Chinese monk called Faxian wrote about how Chinese sailors suffered from scurvy and how they carried ginger on board to help keep it at bay.

Historically, it was never a common disease. It would appear here and there, and usually under special circumstances.

It was with the start of the age of exploration when scurvy became a major problem.

When ships set out on a long voyage, they took food with them which could keep on a ship. They didn’t have refrigeration and they didn’t really have any food storage technology beyond drying and salting.

The typical diet on board a ship at the time consisted of about 3,000 daily calories. The average sailor would get about a pound of salted pork or beef, a pound of hardtack, which was an extremely dense and hard biscuit, and a gallon of ale. There also might be some dried beans or lentils.

However, there was nothing in their diet that was fresh.

Although scurvy was the most pronounced problem, there were other nutrient deficiencies that showed up as well. The lack of vitamin B1 caused beriberi and a lack of vitamin B2 causes pellagra. These conditions would often go hand in hand.

The weird thing about scurvy is that during this period, it was a huge problem that affected millions of sailors. However, it wasn’t as if there wasn’t a lot of opinion on how to treat scurvy, and many of the people who had theories on treating scurvy were right.

Back then, no one had any clue there were things called cells or bacteria, let alone molecules like vitamin C. There weren’t even controlled experiments at the time, so everything was just anecdotal evidence and conjecture.

The cure for scurvy was discovered repeatedly.

In 1536, the French explorer Jacques Cartier was exploring the Saint Lawrence River in Canada when his crew was suffering from scurvy. The natives in the area taught his crew how to make tea out of ceratin pine needles. Those needles contained vitamin C.

Early Portuguese explorers who sailed around Africa to reach India planted fruits and vegetables on the islands of St. Helena for ships to stop and get fresh supplies on their voyage.

In 1579, Spanish monk and doctor Agustin Farfán recommend the consumption of oranges and lemons.

While many people were right, there were also a lot of wrong ideas.

Many people thought that scurvy wasn’t a deficiency in something, it was due to eating the salt pork or salt beef on the ship.

Others had a crazy idea that it was due to sailors who longed for the Earth. They thought the cure was to bring a box of dirt from the home country and to cover the person suffering from scurvy in it and let them take an Earth bath.

One of the first people who can first be credited with taking a major step towards solving the problem of scurvy in a practical sense was Captain James Cook. In his very long voyages in the Pacific, he had greatly reduced, but not eliminated, scurvy by requiring his crew to consume sauerkraut every day. He also insisted on getting fresh fruits and vegetables at every stop.

The person who is credited with really solving the scurvy problem is Scottish Doctor James Lind. He was a naval doctor who did an actual clinical trial which showed that lime juice worked, and it worked better than anything else he tried to cure scurvy.  Lind isn’t just credited with solving the problem of scurvy, but also with conducting the first clinical trial in history.

His advice was eventually adopted by the Royal Navy who in the late 18th century mandated lemon juice be served every day to sailors. In 1794, the HMS Suffolk set off from England for India. The Suffolk arrived in India without a single case of scurvy, and the reports were that the crew arrived healthier than when they left.

In 1867, Rose’s lime juice was invented which was the first fruit concentrate and allowed for the preservation of lime juice without alcohol. That same year, the Royal Navy mandated the daily consumption of lime juice for all its sailors, thereby basically eliminating scurvy.

This is where the term “Limey” came from as a pejorative for the English.

I should note that that citrus wasn’t the only cure for scurvy. In 1801, when  Napoleon’s Army was pinned in at the Siege of Alexandria in Egypt, his chief doctor ordered the consumption of fresh horse meat to prevent scurvy…..and it worked.

Fresh meat does have vitamin C, albeit not as much as citrus fruit. That is why Inuits who live north of the Arctic Circle and tribes like the Massai in Africa who eat almost exclusively animal-based diets don’t get scurvy.

One reason which is given as to why Roald Amundsen beat Robert Scott to the South Pole is that Amundsen learned from a previous expedition that by consuming fresh penguin meat, he and his crew were able to put off scurvy. Scott’s team suffered from scurvy which was probably a contributing factor to the failure of their mission.

The Vitamin C molecule was discovered in 1912, isolated in 1928, and in 1933 it became the first vitamin that was artificially produced.

Today, scurvy is very rare. So rare, that when doctors encounter it they often misdiagnose it because they never see it in patients. However, it does occasionally occur.

One such case was a teenage boy who spent weeks playing video games, consuming nothing but junk food and Mountain Dew.  Other cases have come from people who were obese, but they only consume processed foods and no fresh foods.

Scurvy is a horrible condition to suffer from. Thankfully, due to centuries of trial and error, and 20th-century discoveries, we have all but eliminated it in the modern world.

This podcast will definitely make you better at Jeopardy! Your friends will wonder how you got such a vast, worldly knowledge.