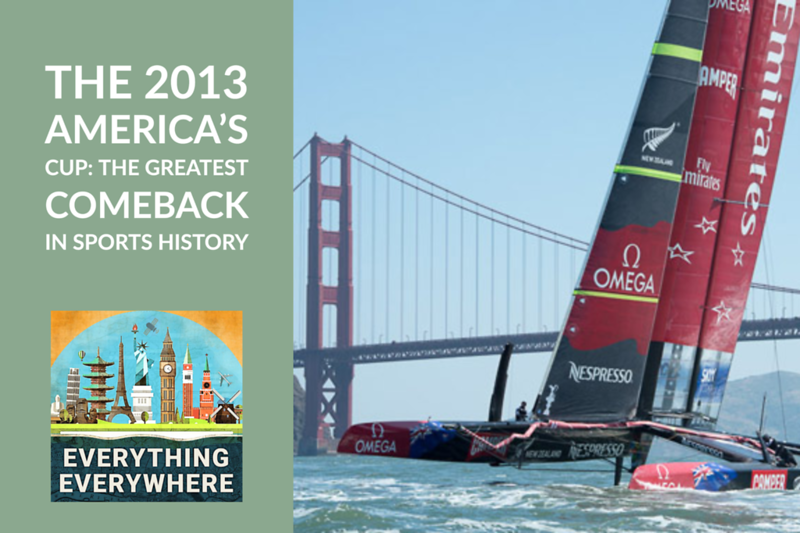 Comeback stories are some of the best stories in sports. Whether it is coming back from a huge deficit, or being on the brink of elimination in a series, these are often some of the most dramatic moments in sports history.

They don’t happen that often because once you are down by a large amount, the odds of a comeback become minuscule.

There was one comeback, however, which stands out above all others.

Learn more about the 2013 America’s Cup, and the highly improbably ending, on this episode of Everything Everywhere Daily.

They offer a multitude of live courses with instructors you can interact with online.

I’m guessing that most of you are not into high-end competitive yachting where ships can cost tens of millions of dollars. If you are please become a supporter over at Patreon.com.

For everyone else, a bit of background on the America’s Cup is in order.

The America’s Cup is the top prize in competitive sailing and is the oldest international competition in any sport in the world.

The winner of the race was a yacht called America, which was owned by a consortium of owners from the New York Yacht Club.

The owners of the yacht donated the trophy they won to the New York Yacht Club for the purpose of establishing a perpetual international competition. The prize was renamed the America’s Cup after the yacht which was the first winner, and the terms of the cup competition were governed under a Deed of Gift given to the club.

The America’s Cup has very odd rules compared to most sporting events. The time and place of the contest are determined by the defending champion. They also get the set the rules that the competition will be run under.

Several years before the competition will take place, the defending yacht club will release specifications for the yachts in the next competition.

The challenging team is determined via a competition which is now called the Prada Cup. The winner of the Prada Cup will then compete against the defending team in the America’s Cup.

In 2013 the defenders were the Golden Gate Yacht Club in San Franciso and Oracle Team USA. As the name would suggest, the team was sponsored by Oracle and its billionaire owner Larry Ellison. Ellison was happy to throw hundreds of millions of dollars at the project to win.

The yacht specification for 2013 was called the AC72. These were, and still are, the fastest class of sailing ships ever designed. They were catamarans that used a wingsail instead of a sail. A wingsail is more like an airplane wing than a normal cloth sail.

The ships also had a hydrofoil underneath the hulls of the catamaran. A foil would literally lift the ship out of the water once it reaches high enough speeds

With a foil and a wingsail, the ships could actually go faster than the wind. Quite a bit faster in fact. They averaged 1.8 times the wind speed. Emirates Team New Zealand set a record going 2.79 times wind speed. They hit a speed of 44.15 knots in 15.8 knots of wind. That speed equates to 81 kilometers per hour or 50 miles per hour.

The series used to determine the challenger was won by Emirates Team New Zealand, making them the official challenger.

The 2013 America’s Cup was to be determined by the first team to get 9 points, with one point earned for each win. However, there was a catch.

In the two years prior to the competition, the Golden Gate Yach Club held a series of races called the America’s Cup World Series. During these races, the defending Team Oracle was caught using bags of lead pellets in one of their catamarans giving them extra weight. This was against the rules.

An international committee that enforced the rules gave Team Oracle a penalty.  Three members have kicked off the team, they were fined $250,000, and most importantly, they were given a two-point penalty for the America’s Cup.

That meant that Team Oracle would get zero points for the first two races they won, in effect meaning they had to win 11 races, whereas Emirates Team New Zealand only had to win 9.

They basically started the competition at a -2 to 0 disadvantage.

Things did not go well for the Americans.

The Kiwis dominated right from the start. After 11 races, they were ahead 8 points to 1. They only needed one more win and the cup would be theirs.

The Team Oracle actually won three races, but their 2 point penalty meant that they still in a massive hole. They had to win 8 races in a row without losing a single one to keep the Cup.

Just to put this into perspective, of the hundreds of seven games series which have been conducted in professional hockey, baseball, and basketball, a team has only come back from a 0-3 start 5 times. It has happened 4 times in the National Hockey League, and once in Major League Baseball. It has never happened in the NBA.

Even outside of those sports, globally it has only happened a very small number of times in any sport that had a 7 game series.

Team Oracle didn’t need to win 4 in a row, which is extremely rare, they had to win 8….and they couldn’t lose a single one.

Even if each race was a 50/50 proposition, they only had a 1 in 256 chance of pulling it off. Given the dominance of Team New Zealand, their odds were significantly worse.

While the defender in the America’s Cup has many advantages by determining the rules and venue, one major disadvantage is that they don’t get to compete until the event itself. The challenger would have had an entire series for their crew to work together and get the kinks worked out.

In theory, the Oracle boat was probably faster. They had put an enormous amount of engineering into it. Likewise, the Oracle team was incredibly experienced. The problem was that the two weren’t meshing.

Team Oracle figured out that the issue was foiling when sailing against the wind.

Under the ships was something called a hydrofoil. At high speeds, the ship would literally rise out of the water and ride on the foil. Going with the wind, both teams would foil, but going against the wind, only the New Zealand team was foiling.

The American computer simulations had given them the wrong advice. Their simulations told them to take the shorter route. The computers hadn’t taken into consideration just how fast the ships were sailing, however.

The Americans had to change plans. Instead of taking a more direct, slower approach when going against the wind, they were now going to take a longer, faster route, which is what the Kiwis were doing.

They had a day off between races where they could go out and practice this technique. They had spent years training doing the exact opposite, now they had one day to practice doing something totally different.

Each race was a sudden death elimination race for the Americans.

Over the next week, they won and kept winning. Their margins of victory were comfortable, but a few were quite close, winning by margins of 15 and 17 seconds.

They did so despite starting the competition with a 2 point handicap and despite being down 8 points to 1 at one point.

The 2017 America’s Cup was held in Bermuda and it was a rematch between the same two teams. This time, however, Emirates Team New Zealand won 7 points to 1, despite starting with a 1 point handicap themselves this time.

Emirates Team New Zealand won again in 2021 in Auckland and will be defending once more in 2025.

Given past competitions, it is unlikely that we will ever see one like the 2013 America’s Cup: statistically speaking, the greatest comeback in the history of sports.