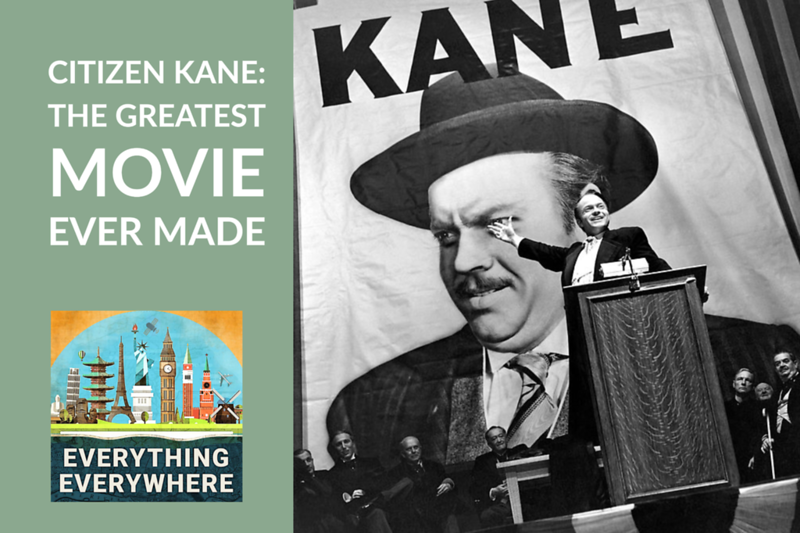 However, the film was a financial failure because the vast majority of theaters refused to show it.

In the 80 years since its release, it has been named the greatest film of all time on multiple lists by critics and directors.

Learn more about Citizen Kane, and why it is considered the greatest movie ever, on this episode of Everything Everywhere Daily.

This episode is sponsored by rerouted.co

Last week I told you about how I finally purchased the jacket I was looking for. I needed an insulated jacket that was also waterproof.

Well, the jacket arrived a few days ago and I couldn’t be happier. The jacket was basically new and I got it for about ¼ to ? the price of what similar jackets cost brand new.

Once again, that is Rerouted.co

Orson Wells was unquestionably a genius.

In the 1930s when he was in his early 20s, he had a string of success on both the stage and radio.

After a meteoric rise where he was making $2,000 a week acting n the middle of the depression, he founded his own acting company at the age of 22, named the Mercury Theater.

The last surviving member of the 1937 cast of Julius Caesar was Norman Lloyd who passed away just recently in May 2021 at the age of 106.

He then created a national media storm with his radio adaptation of H.G. Wells War of the Worlds. It became famous for being so realistic that some people thought it was a real Martian invasion. At this point, he was only 23.

With all this success and talent, studio executives in Hollywood were chomping at the big to sign Wells to a deal to make motion pictures.

The winner of the bidding war was RKO Radio Pictures. Its president, George Schaefer, gave Wells what was probably the best contract ever given to a filmmaker, let alone someone who never made a film before.

He was given a two-picture deal, complete creative control on any approved films, and most importantly, he was given the right to approve the final cut. A clause which was almost never given to any directors in Hollywood.

After kicking around several ideas, Wells came up with an idea for his first film. It would be a fictional retelling of the story of William Randolph Hearst.

Hearst was one of the richest men in the world, and one of the most powerful men in America. He was the first real media mogul and owned newspapers across the United States. In the 1930s, he reached over 20 million people a day via his newspaper empire.

He was known for his extravagant spending and the creation of Hearst Castle in California.

Wells had no clue what he was doing making a movie, yet he was going to write, direct, produce, and act in the leading role in the movie.

He recruited many of the members of the Mercury Theater to make up the cast of the film. None of them had any experience acting on film either.

He did have some experienced help. He recruited veteran screenwriter Herman J. Mankiewicz to help write the script, and he got Oscar-winning cinematographer Gregg Toland to do the camera work.

Part of the secret to the success of Citizen Kane was Orson Wells’s ignorance of movie-making. He was quoted as saying, “I didn’t know what you couldn’t do. I didn’t deliberately set out to invent anything. It just seemed to me, why not? And there is a great gift that ignorance has to bring to anything. That was the gift I brought to Kane, ignorance.”

The initial working title of the film was The American.

There were many innovative things that Wells did in the production of the film.

He had his cast rehearse, which almost never happened on films. He developed innovative camera techniques, including extremely low-angle shots which showed the ceiling, which was never done. He actually dug a hole in the studio floor to get the camera low enough.

The story had a non-linear narrative, which while it wasn’t the first movie to do it, it was the first to use it that extensively.

He used moody lightning, which had only previously been seen in German Expressionism film.

He had characters talk over each other, which was also never done, yet is something that real people do all the time.

His use of sound was innovative and came from his experience doing radio dramas.

The final product was an incredibly groundbreaking film by someone who had never before made a motion picture.

However, the film itself is only half the story.

The other half is what happened to the film after it was made.

William Randolph Hearst was an extremely powerful man. His power as a newspaper publisher could make or break films. He put all of his energy into destroying Citizen Kane.

Hearst papers unsurprisingly never ran a review or an advertisement for Citizen Kane.

The real damage was done by the pressure he placed on the other Hollywood studios. The other studios came together to try to buy the rights of the movie to bury it.

At the time, the studios also owned most of the theaters. Hearst threatened every studio with a ban from his newspapers if they showed Citizen Kane at their theaters, so none of them did.

Hearst papers slandered Wells and there were attempts to entrap him in uncompromising positions.

Because so many theaters refused to show the film, it lost money.

Even though Hearst managed to suppress the film, he wasn’t able to prevent the critics from seeing it, and the critical reception was overwhelmingly positive.

Life Magazine said, “few movies have ever come from Hollywood with such powerful narrative, such original technique, such exciting photography.”

John O’Hara of Newsweek called it “the best picture he’d ever seen” and said Welles was “the best actor in the history of acting”.

The New York Times critic Bosley Crowther wrote that “… it comes close to being the most sensational film ever made in Hollywood.”

In fact, up until April 2021, Citizen Kane had a 100% rating on Rotten Tomatoes. 115 positive reviews, mostly taken from the period when the film was released and no negative reviews. However, they dug up an 80-year-old review from the Chicago Tribune with the title “Citizen Kane Fails to Impress Critic as Greatest Ever Filmed”.

That review dropped Citizen Kane down to 99%.

The New York Film Critics Circle named it the best film of the year.

It was nominated for 9 Academy Awards, and it was expected that the film would sweep the Oscars. However, the industry’s backlash against the film due to the Hearest campaign resulted in the film only winning an Oscar for Best Screenplay.

This began with the British magazine Sight & Sound. It is one of the most respected and longest-running magazines about the film industry in the world.

In 1952 they came out with a poll of film critics and directors to ask them what they thought the greatest films of all time were. Everyone who was sent the poll could list 10 films in any order.  The films were then ranked by the number of people who put that film on their list.

They have conducted the poll every decade since 1952.

In the 2012 poll, Citizen Kane came in second to Alfred Hitchcock’s Vertigo.

The American Film Institute came out with a list of the top 100 films in 1998 and an updated list in 2007. On both lists, Citizen Kane was listed number 1.

Roger Ebert called Citizen Kane the greatest film ever made.

There are a host of other lists where if Citizen Kane doesn’t rank number 1, it usually ranks in the top 5 or 10.

Many people going into the film might suffer from something I’ve called the Citizen Kane effect. Basically, if you know that it’s been named the greatest film ever, and you don’t think it’s the greatest film you’ve ever seen, you can be disappointed.

You just need to recognize it for what it is: an innovative and great film.

Citizen Kane is in my personal top 10 favorite films, but it isn’t number one.

The reason why it’s rated number 1 isn’t that everyone thinks it’s number 1, but simply because so many people think it’s great.

When Citizen Kane was released, Orson Wells was 26 years old. It was probably the peak of his career. He never got a movie deal this good again.

He made many other films throughout his career, and most of them were quite good, even if they didn’t make a lot of money.

In the 80s, he became best known as a pitchman for Paul Mason Wine, which is how most people now remember him.

That is really a shame because he was unquestionably one of the greatest actors and directors of the 20th century.

You learn about things that you never thought you’d be interested in. I have used my newfound knowledge to impress friends and family. Gary’s voice and the sound quality make it an enjoyable listening experience.

Thanks, Majid Baba. I can think of no greater compliment than to know I’m helping people look good in front of their friends. Next time I recommend making bets with them so you can take their money.