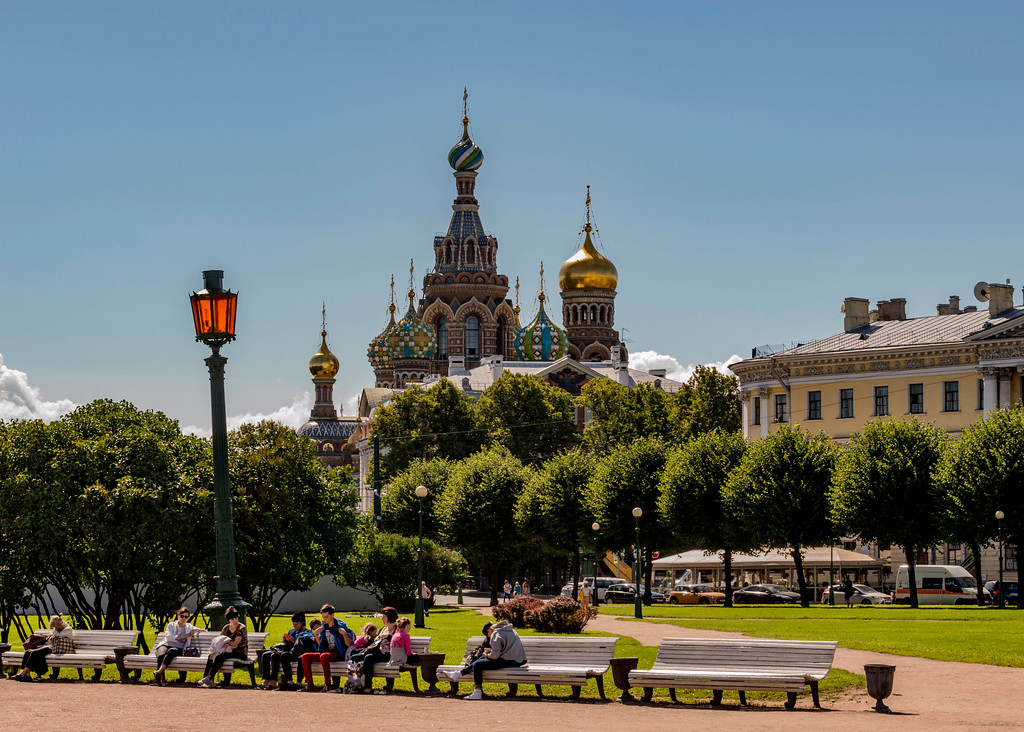 Saint Petersburg is one of the two biggest cities in Russia. Many people say it is one of the most attractive cities in the world—and I would agree with them. Even UNESCO called it the eighth most attractive city in the world. It was built for the tsar Peter the Great, who hired the best architects from Western Europe to design the city. Nowadays, millions of tourists visit St. Petersburg every year to admire its stunning architecture.

The Historic Center of Saint Petersburg and Related Groups of Monuments have been on the UNESCO World Heritage list for Russia since 1990 thanks to its architectural uniqueness. Saint Petersburg was also directly associated with events of universal significance—first, the opening of Russia to the western world, and the start of the Bolshevik revolution.

I spent six weeks in Saint Petersburg in 2014 volunteering. I taught the basics of finance in a Russian school—and after classes, I explored both the famous and the unknown parts of the city. I returned in years later for a week to visit my friends—and to prepare this comprehensive guide to visiting St. Petersburg, Russia.

Things to Do in St. Petersburg

Palace Square and the Hermitage

An impressive square often referred to as the heart of the city, the Palace Square and Hermitage are among the most popular touristic places in Russia, and in the whole world. On one side of the square, you can see the Winter Palace—currently, the Hermitage Museum is inside. Historically, it’s an important place—the first person to live in the palace was Catherine the Great, and it was the first building taken by the Bolsheviks at the beginning of the October revolution.

At the other side of the square, you will see the General Staff Building. In the center of the square is a monumental Alexander Column raised after Russia won over Napoleon’s France. On top of it, an angel smashes a snake with a cross and stands as a symbol of triumph over evil.

If you have enough time, the Hermitage Museum is a must-see. It’s the biggest museum of art and culture in the world and an outstanding palace with 1,500 rooms. It was the winter home of the tsars and you can easily spend one full day in the Hermitage. The minimum time you should allocate for your visit if you want to walk past most of the exhibitions is around four hours—and that is if you plan your route well with a map!

Travel Tip: As an alternative, book a small-group Hermitage tour so you visit don’t miss any of the Hermitage’s highlights, and you have insider information into the fascinating history as well. (And even private tours are quite affordable!)

Church of the Savior on Spilled Blood

Personally, this is the most beautiful building I have seen in my life. I could spend hours just staring at it and admiring its beauty! Tsar Alexander III commissioned the Church of the Savior on Spilled Blood to commemorate his father, who died there in a bombing attack.

This church is different from the baroque and neoclassical architecture in the rest of the city. It’s inspired by classic, medieval Russian style. Inside, the walls are covered with impressive mosaics—you should not leave St. Petersburg without touring the church’s interior.

Saint Isaac’s Cathedral is the biggest cathedral in St. Petersburg and the fourth largest dome church in the world. The dome is covered with a thin layer of pure gold, and the inside is even more impressive than the outside. You can also climb to the viewing platform at the colonnade—I strongly recommend you to do so. It offers one of the best panoramic views of St. Petersburg.

The Bronze Horseman is a monument of Peter the Great on his horse located behind the Cathedral. It stands on a so-called Thunder Stone, which is believed to be the biggest stone ever moved by humans. The legend has it that while the Bronze Horseman stands in St. Petersburg, no enemy will conquer the city. During World War II, locals built a wooden structure and put sandbags around the monument to protect it from bombs. For now, it works—Saint Petersburg has never been conquered.

Travel Tip: The Cathedral and Horseman are easily visited on a full day sightseeing tour of the city—a local guide will take you to all the major sites and explain their role in the city’s history.

Peter and Paul Fortress was the first building in Saint Petersburg. Initially planned as a fort to protect the city from enemies, it never really served its purpose. Currently, you can see many museums and points of interest here and it’s worth spending half a day touring on an independent or private tour of the fortress.

Inside Saints Peter and Paul Cathedral, you can see tombs of Russian Tsars. You can also climb up the fortress walls, visit the State Museum of The History of Saint-Petersburg, and many more things. You can also relax on the beach right outside the fortress.

Make sure to throw a coin toward the hare standing on a log in the water as you cross the bridge to get to the island. If you manage to hit the hare in such way that the coin stays between his legs you will have a lot of luck in your life.

Nevsky Prospekt is the most famous street in St. Petersburg. It’s busy, and if you don’t like crowds, it won’t be your favorite place in the city. There are however a few points of interest on the way and things you should do before leaving the city.

First of the things to do in this area is Kazan Cathedral, one of the city’s more impressive churches. Inside, you can see one of the most important icons for the orthodox church—an icon Our Lady of Kazan. Even though it’s not certain if that’s an original or a copy, it’s worth seeing how people worship it.

You will also see the beautiful building of Singer House, known as House of Books/Dom Knigi, and Gostiny Dvor, St. Petersburg’s first shopping center and one of the first shopping arcades in the world. Along this route is also the Alexander Theatre and the Monument to Catherine the Great. Watch out for when you cross Anichkov Bridge, famous for its beautiful sculptures of Horse Tamers.

With its stunning architecture, Saint Petersburg is a paradise for travel photographers. If you’re looking for the best possible light, consider visiting in the summer during the white nights—golden hour lasts for multiple hours at that time of year and all of the top attractions look magical.

Another great trick is to photograph the city from viewing towers or rooftops. You can climb the colonnade of Saint Isaac’s Cathedral or the belltower of Smolny Convent for great views.

There also are special tours organized on less popular rooftops around St. Petersburg—this is a great option out for those committed to finding the most special angles on the city.

If you’re looking for a less touristy part of the city and you’d like to photograph “real life,” take the metro to the northern part of the blue line—Parnas, Prospekt Prosvesheniya, Ozerki or Udel’naya stations. There, you can walk around the blocks of flats, meet the street vendors, and see what life really looks like outside of the beautiful architecture and touristy things to do. Every weekend near Udel’naya metro station, a huge flea market takes place—this can be great for photos, too.

It is best to stay in the city center, around Nevsky Prospekt or Saint Isaac’s Cathedral. Not only does it give you a possibility to reach many tourist attractions in the center on foot, but if you’re visiting in the summertime you’ll be able to see the rising bridges show at its best, without the risk of staying on the “wrong” side of the river. When the drawbridges go up, it’s not possible to cross the Neva River.

However, if accommodation in the center seems too expensive or it is not available—pay attention to stay close to metro stations. The city’s metro system is well developed and it gives you a lot of flexibility.

How to Get to St. Petersburg

The easiest way to get to St. Petersburg from other countries is by air. The main airport, Pulkovo (LED), is located outside of the city. In order to get to the center, you can either take city bus number 39 or a marshrutka (mini-van) K-39. Both will take you to Moskovskaya metro station (blue line).

It is also easy to get to St. Petersburg by bus from Tallinn, Estonia, or by train from Helsinki, Finland. If you’re visiting Moscow beforehand, you can also take a train to St. Petersburg from there—you can choose a quick train Sapsan (the journey takes around four hours), or a cheaper but slower train (around eight to nine hours). Slow trains run overnight, too.

The overall cost of your trip to St. Petersburg depends a lot on your travel style and needs. Prices of accommodation vary from below 10 EUR per night in hostels and homestays to over 100 EUR per night in great hotels.

If you’re on a budget, I recommend you to eat in a chain of budget bars (Stolovaya), where you will pay less than 200 RUB (~3 EUR) for the main course. In touristy restaurants like Katyusha on Nevsky Prospect, prices are often four to five times higher, to an average of 700 RUB for a main course (~10 EUR).

Entrance to most famous churches costs 250 RUB (~3,5 EUR). The Hermitage entrance is 600 RUB (~8,5 EUR) as of 2019. Prices change every year. Some attractions, like the Catherine Palace and Park in Pushkin or the Peterhof Grand Palace, are expensive during high season and free outside of it. But they are also less spectacular, e.g. the fountains will be off.

Weather in Saint Petersburg is unpredictable. It’s one of these places in the world that can show you all the seasons of the year in less than 30 minutes. The weather tends to be the best in the summer months (June – August). From mid-June till mid-July you can also experience the white nights. On the other hand, the city is the most crowded during these months, and if you want to escape the crowds, it’s perhaps best to plan your trip for spring or autumn.

If you’re not afraid of the cold, the city looks beautiful in winter, too.

Since the city is located by the Finnish bay and it’s cut with rivers and canals, it is windy most of the time. The best weather advice for Saint Petersburg is: Be prepared for everything.

I hope you enjoyed this overview of the best attractions in the historic center of Saint Petersburg. If you need more, check my full guide to St. Petersburg with a printable e-book to download on my blog. It is an outstanding city, one of the most beautiful in Europe, and maybe even in the whole world. Make the most of your trip and enjoy your time!

My name is Dorota, I live in Poland. Even though I have always been passionate about traveling, I discovered a whole new world when I went to Russia for a six week volunteering program. I loved it so much that I decided to volunteer on every continent and promote this idea on my blog—Born Globals. I slowly make the dream come true—and I want to help others believe they can do it too! You can also find me on Instagram and Facebook.