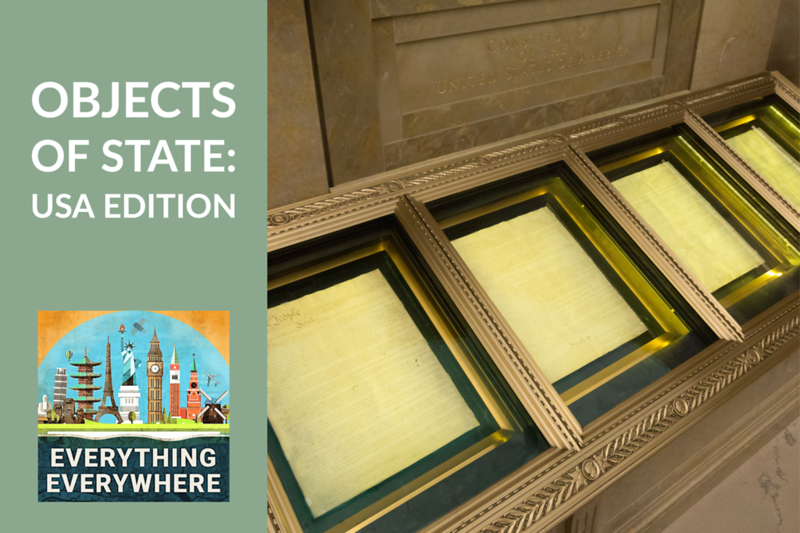 Every government had objects which central to their functioning. These are items, physical objects, usually steeped in history and tradition which are involved in the mythology of the state.

The United States is no exception.

Learn more about the American objects of state in this episode of Everything Everywhere Daily.

The genesis of this episode came from researching stories about several different historical objects.

After researching several of them I realized that they all had a common theme. There were all important objects in the history of the country and there is either some important significance behind them, or the actual object is used in the governance of the country.

Every country has these items, and some countries put more importance on them than others. I’ll start with the United States, just because that is what I’m most familiar with.

We’ll start with the most obvious and important one: the Constitution of the United States.

I’m not talking about the ideas and words in the constitution, but rather the actual, physical original copy of the document itself.

There has been a rumor floating around for years that the Constitution, the Declaration of Independence, and the Bill of Rights were all written on hemp paper. This is not true.

Parchment is made from animal skin. The parchment that the Constitution was written on came from sheepskin.

The actual document was actually a rush job. Once the delegates agreed on the final language, the final parchment version had to be done over a weekend for the final signatures.

The person whose handwriting is on the constitution is a man by the name of Jacob Shallus. He was the Assistant Clerk to the Pennsylvania General Assembly, which met at Independence Hall where the Constitutional Convention delegates were meeting.

Because he had to transcribe almost 4,000 words to four large pieces of parchment, there are actually a few small errors in the document.

There were a couple of cases where he missed a word and then had to insert a word in between others.

On the bottom of the first page, he had to scrape out an entire line, and when he had the document ready for the delegates on Monday they had a last-minute change when they increased the maximum allowable number of representatives from one per 40,000 people to one per 30,000.

He actually documented the changes at the end of the last page.

The document was actually not considered very important after it was signed. James Madison originally took custody of the document had he was Secretary of State, but then lost track of it.

It was found in 1883 in the closet of the building used by the departments of  State, War, and Navy. It was folded in a tin box and no one knew it was there. In 1894, the State Department took control and put the document between two plates of glass for protection.

In 1924, Calvin Coolidge issued an executive order which transferred the documents to the Libary of Congress.

A building for the national archives was completed in 1935 as a New Deal program, but the documents weren’t moved there right away. They were held in Fort Knox during the duration of World War II.

In 1951, the documents were transferred to a special case which was filled with helium, and special light-filtering glass.

Today, the Consitution, along with the Bill of Rights, and the Declaration of Independence, is on display in the National Archive Rotunda during the day. In the evening the documents descend into a specially designed vault that can withstand a nuclear blast.

Another item that has special significance is the Star-Spangled Banner. This is the actual flag that was flown over Fort McHenry in Baltimore during the War of 1812 and was the inspiration for the National Anthem.

The flag has 15 stars and 15 stripes, which represents the 15 states at the time. They eventually gave up adding strips as there were too many.

The flag was originally 30 by 42 feet and it was created by a local Baltimore seamstress, Mary Young Pickersgill. The flag was commissioned by the fort commander who wanted “a flag so large that the British would have no difficulty seeing it from a distance”.

As it says in the song, the flag survived the war and it went into the hands of the family of the fort commander. Over the years they gave away pieces of the flag as gifts. Currently, the flag is 30 by 34 feet.

Today, the flag is owned by the Smithsonian Institute, and it is on permanent at the National Museum of American History.

Both houses of Congress have objects which capture the traditions of their bodies. In particular, the gavels.

The House of Representatives has many gavels. Gavels get used and literally take a beating. The house has gone through many different gavels. In fact, they used to have their own lathe in Washington to make gavels.

The oldest gavel in the house collection was used by former Speaker of the House Nicholas Longworth from 1925 to 1931.

There is a rather recent tradition which started in 1999. At the opening of a new session of Congress, it is called to order by the Clerk of the House. The Clerk has one duty, and that is to run the election for the Speaker of the House. For this one duty, the clerk has a special gavel which is only taken out and used for this purpose.

The gavels used in the House are typical mallet-type gavels.

In the Senate, the gavels have much more history.

There was a single hourglass-shaped ivory gavel which was believed to have been first used in 1789 by John Adams. However, by the 1950s, it was getting worn out and cracked. They put silver ends on it to help stop the wear, but it finally shattered in 1954 by the then Vice President Richard Nixon.

The current Senate gavel was donated to the Senate by the newly independent government of India.

The desks in the Senate also have a lot of history. Each senator gets their own desk on the floor of the Senate. Some of the desks are reserved by Senate rules for Senators from certain states. The desks used by Daniel Webster, Henry Clay, and Jefferson Davis are all reserved for the senior senator from the respective states they were from.

The president also has some traditional objects. In particular, the Presidential Desk, also known as the Resolute Desk.

The Resolute Desk was a gift from Queen Victoria to President Rutherford Hayes in 1880. The wood from the desk came from the hull of the HMS Resolute, which was trapped in ice in the Arctic.

The location of the desk has changed over the years. It has been used all over the White House in public and private areas.

The desk was first used in the Oval Office by John F. Kennedy in 1961. President Johnson moved the desk and put it on display in the Smithsonian.

The desk was taken out of the Smithsonian by President Carter and has been used by every president since. There are a total of six desks used by various presidents since President Taft created the modern west wing, which was used as the administrative wing.

The ceremonial desk for the Vice President is the Theodore Roosevelt Desk.

There is one final object I want to mention. This is actually the object that started me down the rabbit hole.

It started with a simple question: to whom does the President submit their resignation to, if they resign?

You might think it would be the Vice President, or if not them then maybe the Speaker of the House, but it isn’t.

When Richard Nixon resigned, and he was the only president to resign, he submitted his letter of resignation to the Secretary of State.

Why the Secretary of State?

Because the Secretary of State is the keeper of the Seal of the United States. The seal isn’t just a design that is on the currency, but it is also a physical object which is used to validate official documents.

It is consists of a metal die as well as a large wooden press. There have been several presses used since the establishment of the country, but the current press has been in use since 1904.

The seal is currently on public display in the headquarters of the State Department, visible through plexiglass. It is used between 2,000 to 3,000 times per year to validate documents such as treaty ratifications, appointments of ambassadors, and communications from the President to heads of foreign governments.

If you go visit the State Department, there is a chance you might see some official come out, stick a piece of paper in the press, and validate some official document.

These are just a few of the objects which hold a special place in the US Federal Government. Other countries have their own objects, which I’ll be exploring in future episodes. Many of those objects are much more interesting than the American ones if for no other reason other than their country is older.

Today’s review comes from listener Baibe over at Podcast Republic. They write:

Love learning about new things in quick small bites. The topics are things I didn’t know I wanted to know about and glad that I have.

Remember if you leave a review you too can have your review read on the show. Also, if you email me a question, I’ll also answer it as well.