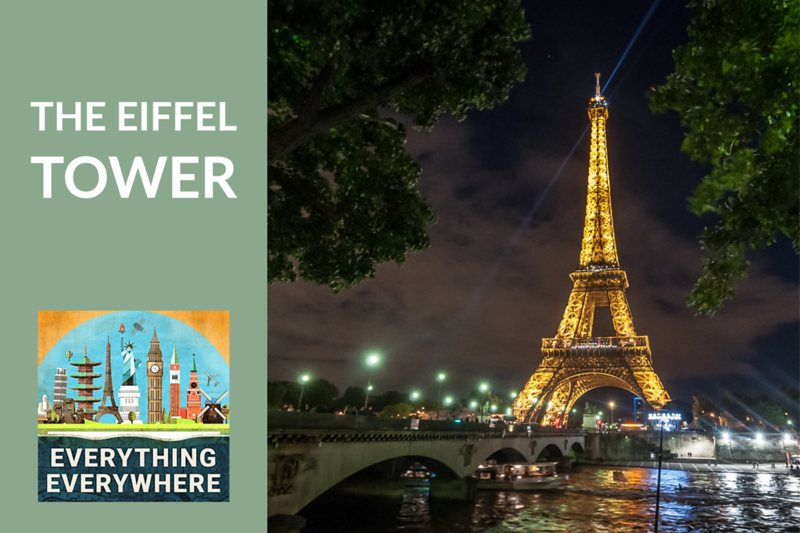 In 1889, a new exhibit was constructed for the Paris World’s Fair. It completely dominated the Paris skyline.

Many people considered it an eyesore and an architectural abomination. The only redeeming thing about it in their mind was the fact that it was only supposed to be temporary and was eventually going to be torn down.

But it never was, and today it has become the iconic symbol for the city.

Learn more about the Eiffel Tower on this episode of Everything Everywhere Daily.

The exposition organizers wanted a signature centerpiece for the fair, so in 1884 they asked for proposals from noted architectural firms.

The proposal which eventually became the Eiffel Tower came from the architectural firm of one Gustav Eiffel.

Eiffel had developed quite a reputation by the 1880s. He had become a master of projects using iron, which had defined the age he lived in. He designed several buildings for the 1878 Paris World’s Fair, several iron bridges, as well as the internal iron framework for the Statue of Liberty.

The proposal for the 1889 fair actually didn’t originally come from Eiffel himself. It came from two of his engineers: Maurice Koechlin and Émile Nouguier.

The idea for the structure came from a tower that was built for the 1853 World’s Fair in New York. The tower was called the Latting Observatory. It was 315 feet or 96 meters tall and made of wood with iron bracings.

The tower for the 1889 fair was envisioned to be the world’s first 300-meter structure. If you remember back to my episode on the progression of the world’s tallest buildings, the Eiffel Tower overwhelmingly became the tallest structure in the world when it was built.

Eiffel himself wasn’t really enthused about the initial design, but he let the engineers on his staff continue investigating the project. The initial idea looked more like a really tall oil rig more than anything else.

The engineers then took the idea to one of the chief architects in the firm who added a glass pavilion on the first level and decorative arches at the bottom.

The new design captured the attention of Eiffel and he got behind the project.

In 1885, he did a major presentation to the French Society of Civil Engineers on the proposed tower. Of the tower he said ??it was “[n]ot only the art of the modern engineer, but also the century of Industry and Science in which we are living, and for which the way was prepared by the great scientific movement of the eighteenth century and by the Revolution of 1789, to which this monument will be built as an expression of France’s gratitude.”

It took about a year for funding to get arranged, but when it was, the terms of the competition were changed such that Eiffel was guaranteed to win the assignment.

He did of course win the contract, and construction on the tower began in 1887.

The contract was actually signed with Eiffel personally, rather than with his company. He was given 1.5 million Francs, which was a quarter of the estimated cost. His contract gave him the rights to all revenue from the tower for 20 years. More on that 20-year timeframe in a bit.

There was a huge outcry amongst artists and architects in Paris. Some objected to the feasibility of a 300-meter tower. A 200-meter structure had never even been built. The biggest objection, however, was that it would be a scar on the skyline of Paris.

As construction began, a “Committee of 300” was formed of notable figures in the arts and architecture, who criticized the tower.

They published a letter titled “Artists against the Eiffel Tower” which was published in the newspaper Le Temps. The letter was scathing. They said:

We, writers, painters, sculptors, architects and passionate devotees of the hitherto untouched beauty of Paris, protest with all our strength, with all our indignation in the name of slighted French taste, against the erection … of this useless and monstrous Eiffel Tower … To bring our arguments home, imagine for a moment a giddy, ridiculous tower dominating Paris like a gigantic black smokestack, crushing under its barbaric bulk Notre Dame, the Tour Saint-Jacques, the Louvre, the Dome of les Invalides, the Arc de Triomphe, all of our humiliated monuments will disappear in this ghastly dream. And for twenty years … we shall see stretching like a blot of ink the hateful shadow of the hateful column of bolted sheet metal.

Gustave Eiffel responded by comparing it to the Great Pyramid, saying “My tower will be the tallest edifice ever erected by man. Will it not also be grandiose in its way? And why would something admirable in Egypt become hideous and ridiculous in Paris?”

The objections didn’t go anywhere and the tower was completed in a remarkable 2 years and 2 months.

The structure is not made out of steel. It is made out of what’s called puddle iron. It was the material most commonly used in construction in the late 19th century before it was eventually replaced by steel.

The tower is also astonishingly light for its size considering its made out of iron. If you created a cube, the height of the Eiffel Tower, the weight of the air in the cube would almost weigh as much as the tower itself.

One of the reasons it was built so quickly is because it was prefabricated. The girders and sections were built off-site and delivered to the construction site already assembled.

The Eiffel Tower was inaugurated on March 31, 1889. However, the public wasn’t allowed in the tower until May 15.

It was an immediate hit and it was the highlight of the world’s fair. The total number of people who paid for entry into the tower during the fair was 1,896,987. Each paid between 2 and 5 francs depending on what level they wanted to ascend to.

During the fair, the tower was lit with gas lamps and a giant searchlight was installed at the top.

After the fair, as per the terms of the contract, the tower remained the property of Eiffel. It was open to visitors, there was a restaurant, and Eiffel himself had an office in the tower.

However, by 1909 things had changed. There was a new thing called radio, and a 300-meter iron tower proved to be invaluable as a radio tower.

The tower also proved to be useful for other things as well. Meteorological observations were made from Eiffel’s office at the top of the tower. In 1910, cosmic rays were discovered in the Eiffel Tower. At the beginning of World War I, the Eiffel Tower was used to jam German radio signals.

From 1925 to 1934, the French auto company Citroën paid for a giant illuminated sign on the tower, making it the world’s largest advertisement at the time.

In 1935, it was one of the first television broadcast antennas in the world.

During World War II it was closed to visitors and after the German occupation ended, Hitler left orders that it be destroyed, but the military governor of the city ignored the order.

The tower still has to be completely painted from top to bottom every seven years to prevent rust, which is one of the implications of being built from iron. It has been fully painted 19 times since its construction.

Today, the Eiffel Tower is one of the most visited tourist attractions in the world. It gets over 7,000,000 visitors per year, and over a quarter billion people have visited since it was opened.

Even though it is a really touristy thing to do, I recommend visiting the Eiffel Tower if you’ve never been to Paris. Get it out of the way on day 1. Buy your tickets for the elevator in advance, or else you’ll spend an hour to two in line. You can also just walk up the tower, which honestly is a better way to see it, even if it takes longer.

If you have been there before, I’d recommend going at night after the tower is closed. The atmosphere there, especially during the summer, is like a party. You’ll find people roaming around selling wine by the plastic cup.

In hindsight, the Committee of 300 couldn’t have been more wrong. The Eiffel Tower didn’t upstage the other great landmarks in Paris, it now sits alongside them as one of the most iconic structures in the world.